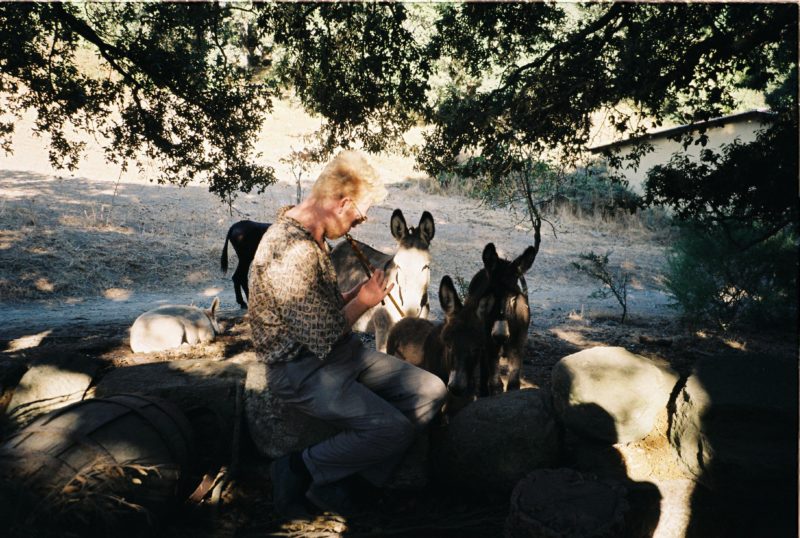 Spearheading the caravan of KRAAK Festival highlights is our all-time favorite aulos head Bloedneus & de Snuitkever, whose layered drones evoke true ancestral liturgies for timeless vibing. It's also a good a time as any to announce his upcoming album on this KRAAKing label :000 We caught the man in the middle of what he called "a traditional Flemish weekend of watching cycling competitions" and got him to answer some questions and share even more emotions and tunes.

I was raised in a small village in Haspengouw, Limburg. Since my 18th I’ve been living in Brussels.

We've talked about it before, but it's always nice to hear: how did you come about the aulos and how did it shape you as a musician?

I would say the aulos forced me into being a musician. Before I never really considered myself as one; I was working more around sound performances and installations. I try to see it as the biggest and most musical part of my research that’s centered around breath, which I also work on via whistling, gargling, etc…

I went to the Cevennes to meet Max Brumberg who, also hypnotized by the instrument, started a deep investigation into building Auloi. Since he makes flutes, it’s a really tricky transition since the aulos is a double reed instrument with reeds that are made in a process that’s quite unique.

The aulos presented itself to me in a time when I decided I wanted to work without electricity. The aulos for me was an instrument that had sound qualities that were very synthesizer-like, so I had this desire to make electronic-like music with it. ANCIENT GREEK – SYNTHESIZER.

Since continuous sound is essential in this process, that choice involved learning circular breathing. So it was a very intense training period where every day was focused on getting a grip on all the different aspects of the instrument.

What do you think the future holds for you and the aulos? Are you looking to explore other reeds or instruments?

I would like to invest more time in making reeds, experimenting with different measurements etc… I think the future will be a process of zooming in, focusing on specific research. Musically, that would involve a deeper commitment into understanding the sound properties and effects when playing the double reeds together (beating tones, other OAE’s,…) . Through this research I feel very much inspired and guided by the work of Eliane Radigue and Maryanne Amacher.

Since playing the instrument and making reeds is so time consuming I don’t have much time to put my lips around other instruments for the moment. That being said, singing and whistling are both very dear to me and I feel the desire to introduce them into the Bloedneus & de Snuitkever universe.

You don’t only perform solo, but also in the duo Ï Î, together with Victor Guaita Igual who plays the viola. Did the combination of the viola and the aulos immediately feel natural?

YES! Blending the aulos with another instrument is quite tricky. So it’s really a gift to be able to play with such a talented and skilled musician like Victor. The sound qualities of the viola really blend well with the flexibility and bending of the reeds of the Aulos. When listening to recordings it’s often really hard to tell the aulos and viola apart. Dissolving the sounds into each other is one of our biggest musical guides.

Your debut LP will soon be released on our humble label. Can you talk about the music and the process behind it?

It was a similar process likeLe Gardon, my first release which was later re-released as a CD on Beyt Al Tapes. A very intuitive, personal reflection of the improvisations I did last year. The biggest difference being it will be much longer improvisations and they will have a bigger sound since all the tracks are recorded in very reverberant acoustics. Also now there is the desire to zoom in on different sound qualities of the aulos. So even though melody and rhythm are still very much present, they are slowly making space for a more textural, microscopic approach.

The album will open with a recording made in a desolate church on Monte Gonare in Sardegna. The other tracks are self-recorded in Brasserie Atlas, in a space with similar amounts of intoxicating reverb. I briefly considered a more conceptual approach, making strict choices, but it felt like this was the right next step. It feels very important for me to capture the adventure, the process of discovering and learning to play the aulos. Le Gardon was made one year after I met the instrument. The album on KRAAK will be a témoinage after two and a half years.