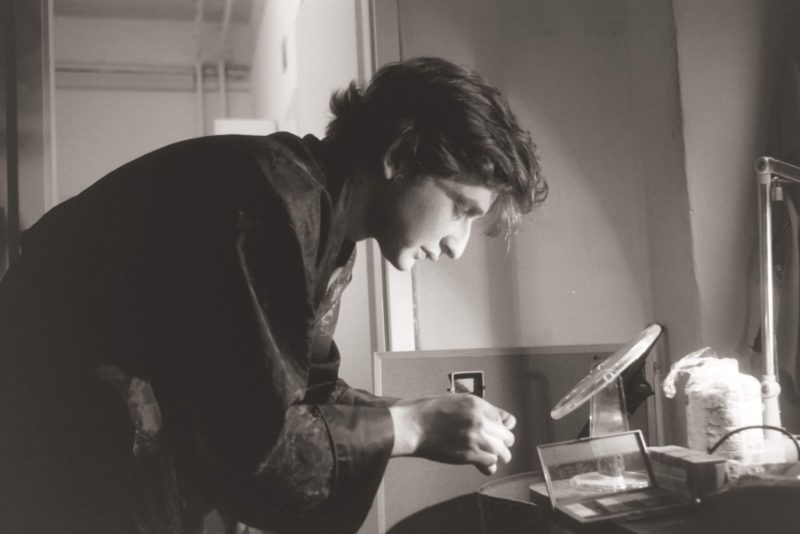 Yung Paul Arámbula left his native Phoenix for Berlin’s greying prospects, keyboard in tow and words about trials, tribulations and the nothing in between swirling around. His songs are populated by inner demons, mixed feelings, home cooked scenarios, rides to nowhere and missed connections, with internal turmoils and random thoughts manifesting alongside some serious fist-pump-worthy melodies. In high anticipation for the weekend, he sent us words about leaving homes and finding new ones, intimate compositions and today and tomorrow's dreamings.

So there’s little information out there but it seems like you’ve been actively making music for a while now. What’s your story?

Hellooo thank you for having me!

So yeah I've been making music and performing for about 15 years. I played in a few bands before. Basically the first one and most consistent was/is Chandails, which I play in with 3 of my dearest, oldest friends. I've also played in bands Vegetable and Soft Shoulder, to name some. Then I started playing solo under my name. It originally was with only an acoustic guitar. It was a semi noisy, semi melodical sort of thrash guitar. It sounded like a cross between Bill Orcutt, John Fahey, and Boredoms or so. Then I moved to Berlin and brought a small cheap Yamaha keyboard I’d bought at a garage sale for $6. I sort of missed playing more poppy songs so I started messing with it. I didn't know anyone, so it was nice to have the full band with the presets and the left and right hand doing the rest. So eventually it escalated to what it is today. Still trying to get a band though! I have one sometimes.

You’re originally from Arizona it seems? How did growing up there shape you and what brought about your decision to move to Berlin?

Growing up and playing in Phoenix, and the university city next to it, Tempe, was really special. In the moment it was happening it felt so, and to be honest even more so the older I get. Nostalgia aside, it really was such a special place. The years I was playing there, it was a really sort of golden age of smaller touring bands and house venues and all the ideal DIY stuff. Phoenix got a surprising reputation in the West Coast touring route. I think the exciting places in terms of bands and venues were us, Oakland, and Olympia. There were a lot of relationships building between people from those places. Of course there were other cities too! Those three though: *chef's kiss*

Nevertheless, the music scene can't really hold everything sometimes. People always move from Phoenix. When you look up from the music tunnel vision, it's not as pretty. I love it a lot now! The farther away I'm gone, the more beautiful I think it is, but it gets really bleak. Not much to do. The summers can get a few days up to 52°C. Also, I just really want to see more! I had met someone living in Arizona but whose homebase was Berlin. They told me how it was easier to get a visa there (in comparison to other European cities) so I decided I'd try. I didn't know ANYTHING about Berlin. I was pleasantly surprised to see how international it was. So I felt like I'd moved to everywhere. I'm happy I'd made such a blind decision. Something easier to do when you're 20. Hehe.

Your music has a strangely nostalgic feel to it. Do you listen to a lot of old stuff?

I do listen to a lot of old stuff. I feel I have a sort of "slow" music taste. I listen to a few songs over and over and over for like 4 months and then switch to a few more. Meanwhile I listen to online radio shows and djs and things and experience so much music that way, but my favs are really.... savored? I think as a song composer, when I hear a song I really like I just spend so much time almost studying it. Production, composition, instrumentation, text, etc, until I hear every little *ding* and *boom* and breath. As I said, I do come from a punk kind of background, so I record with a minimal set up, and record with one as well. So naturally it has a more "analogue" feel maybe. I'm messing much more with electronics and digital outputs. I try not to sound like something made in the 70s or something; but only with a few elements that give away that it's made recently. However, most new music I listen to is from a few decades ago, hehe.

The dialogical lyrics in Floating To The Waist make your songs feel very intimate. What does your songwriting process look like?

Yeah I guess that song is the most intimate one. That one particularly is about these big conversations one has with themself in their room, and only in their room. It's about being scared to explore different parts of gender outside of the safety of the bedroom. I think it was important for that one to be very intimate and for it to sound like a conversation so that it balanced and smoothed out the heaviness of the topic itself. Also the promise of finally being free once the other sides of you are finally accepted does sound like the ultimate comfort and intimacy. Over time I knew that writing that to feel like a real conversation could only feel like one if I didn't write the lyrics before, so it's semi improvised.

I generally spend a lot of time composing the song. As it comes together I develop a vocal melody. Out comes just syllables, sounds, and phonetics. Over time some of the "fake words" get so stuck in some of the spots in the song that I can't imagine the song having a different sounding word in it; so I find a word that resembles the phonetic sound. Once I get a few of those, then the text and story/context form around that. It helps with trying to decipher and choose all the different topics possible, out of thin air. I think when I was first starting out with the keyboard, I liked the sustain which provided good background for interludes in the set, which allowed for some talking, or just placing some dialogue in the song, or having the vocals clean enough that the voice is prominent. I've just always liked "talky-singing". Speaking just allows more freedom to create a picture. I think hearing just free speaking in a song immediately feels inherently more intimate. It's like "oo! Its the band in real life and they're talking to me now!"

Do you have any projects coming up, recording or otherwise?

Well, I recently finished Towantowanto, an album I released on cassette. They're basically gone but there's talk of making a new batch of them. It's one the label Musikií; based out of Berlin and Vilnius. I'm going to try to have it available online by the beginning of April. I'm working on and almost done with the next album! Well, not really almost. The songs are chosen and begun, but still working on the instrumentation on a few, I need to edit the hell out of one, and then need to write the text for all of them. Which is what makes that "almost" in "almost done" ALMOST a lie. Haha. Then of course the post stuff, mastering and all that.

Other than that I just really want to play around anywhere and as much as possible. So, hoping to play places outside of Berlin. Like Antwerp for instance at the KRAAK Festival. Haha! So thank you for having me and being interested! Much love.