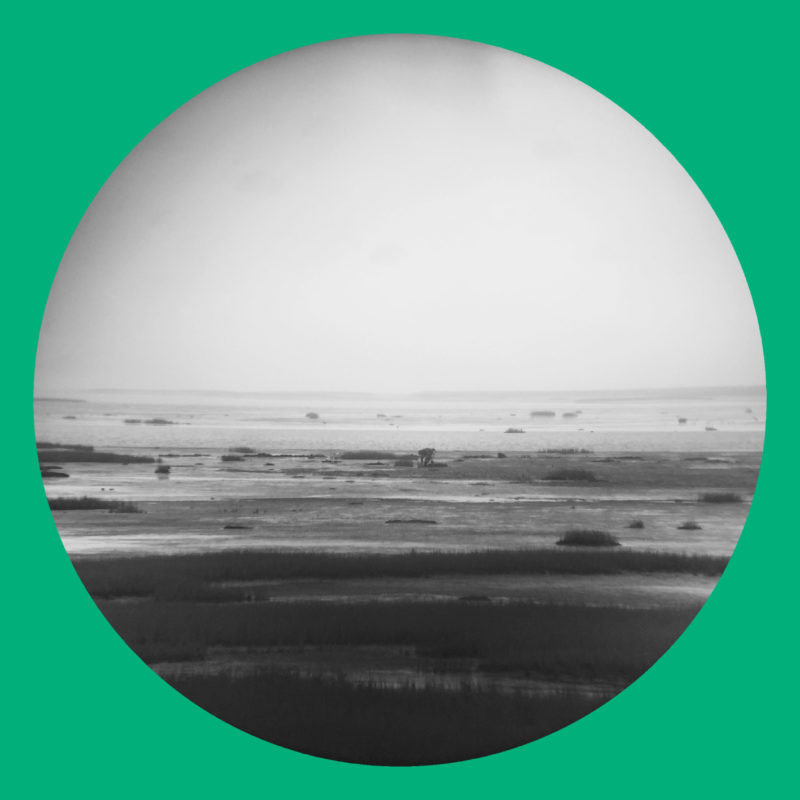 
buy
chik white is the moniker of Darcy Spidle, jaw harpist, tape collagist, non-institutional locally-sourced field recordist, and founder of the OBEY Convention festival. Spidle was part of the Canadian crust-punk scene in his younger years, but he eventually evolved towards more adventurous sides of music. In 2009, after obtaining a collection of jaw harps, his musical output took its most dramatic turn. Since then, he has released a string of tapes and records on seminal underground labels like Feeding Tube and Chocolate Monk.

His latest release, guts magnet sea, is a commissioned album for the BRAUBLFF (materie und laut) series. It collects 12 new pieces. The main core was captured during walks to an islet close to Spidle’s home. He taped environmental sounds and himself playing the harp aloud. Then, the tapes were thrown into the ocean, becoming co-author for his micro-compositions. The salt disintegrated the magnetic tape and added burbling and grunting noises to the original recordings. As such, the pieces deal with questions of authorship and ownership.

The disintegrated pieces are paired to compositions in which the jaw harp acts as a tool to unleash Spidle’s inner body sound. A jaw harp is macabre at its core, as it can only produce sound through the cavernous skull. chik white uses the instrument to jam with the landscape and weather, holding open a discussion between outsider and outside.

Spidle’s music is a proposition to see culture as a brutal and vital engagement between humans and the natural world — rather than seeing it as an artificial division. At the core, you hear a humble disposition for humankind, a provisory act in the complex cycle of destruction and rebirth by nature.

Comes with an essay by Darcy Spidle and a lengthy interview.

DE NEUS VAN GOD - alone in the studio..
A rainy Friday afternoon, alone in the studio, playing some recent and upcoming releases and announcing the new 7inch by YOR!
by De Neus van God
De Neus Van God
This edition highlights the 7th edition of KRAAK's Braublff (Materie und Laut) series and the 5th edition of Eastern Daze festival.
by De Neus van God
Chik white
AN INTERVIEW. chik white is the moniker of Darcy Spidle, jaw harpist, tape collagist, non-institutional locally-sourced field recordist, and founder of the OBEY Convention festival. Spidle was part of…
by Niels Latomme
guts magnet sea
AN ESSAY ABOUT CHIK WHITE'S 'GUTS MAGNET SEA' ALBUM. Though there seems to be nothing (no body, no ground, no sky), a jaw bone aches and is stiff—a sensation felt, yet with no soul here to claim it. T…
by Darcy Spidle
De Neus van God
by
A soundtrack for the Summer
The summer is here, and for you De Neus van God handpicked their favorite summer tunes — a selection of records released the first 6 months of 2018. In no particular order. At the end of this post you…
by The Avant-Guardian HQ's