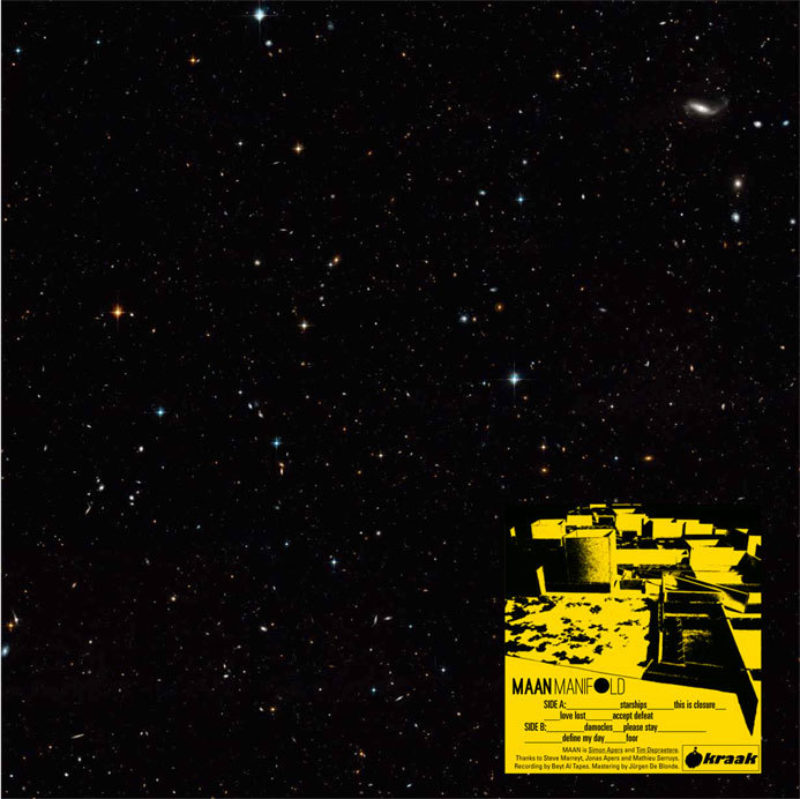 
buy
It is hard to avoid symbolic interpretation when K080 reintroduces the eighties sound in the KRAAK catalogue. Maan consist of two Flemish engineer students in their early twenties. They do not only love their sciences cold, their debut LP 'Manifold' harks back to the misanthropic aesthetics of Belgium's wave era.

But Maan are not the kind of revivalists you would expect them to be. Although the four track garage sound makes them sound like a lost demo tape of teenage angst expression of those days, they owe as much to the literary side of the Shadow Ring, the roughness of The Fall or even the intoxicated parlando-and-bass methods of early Arab Strap. Simon Marius and Tim Depraetere had no clue when old cunts like us tried to impress them with name dropping and references to the bands of our youths. To them we were just an annoying update of nagging hippies who compare everything new they hear to Greatful Dead or Hawkwind. Maan told us to fuck off and went home to listen to their fresh free jazz downloads, then took up some random instruments, made a bunch of tape loops and decided to make a record.

Nevertheless, they still sound like something you found on Mutant Sounds in a quest for some obscure trip you had not heard before. Performances of Maan always show the band’s many different angles. Their link to a couple of young Belgian visual artists had them playing at art galleries a lot when they just started out. That might be the reason that you could catch them doing an hour long minimalist kraut mantra, using only trumpet and voice, as well as a more traditional song based basement gig. ‘Manifold’ is the product of song writing, although the trashy art school vibe is present all the same. Do not be mistaken though: Maan are scientists and they do not care about your intelligent pseudo-music philosophy.