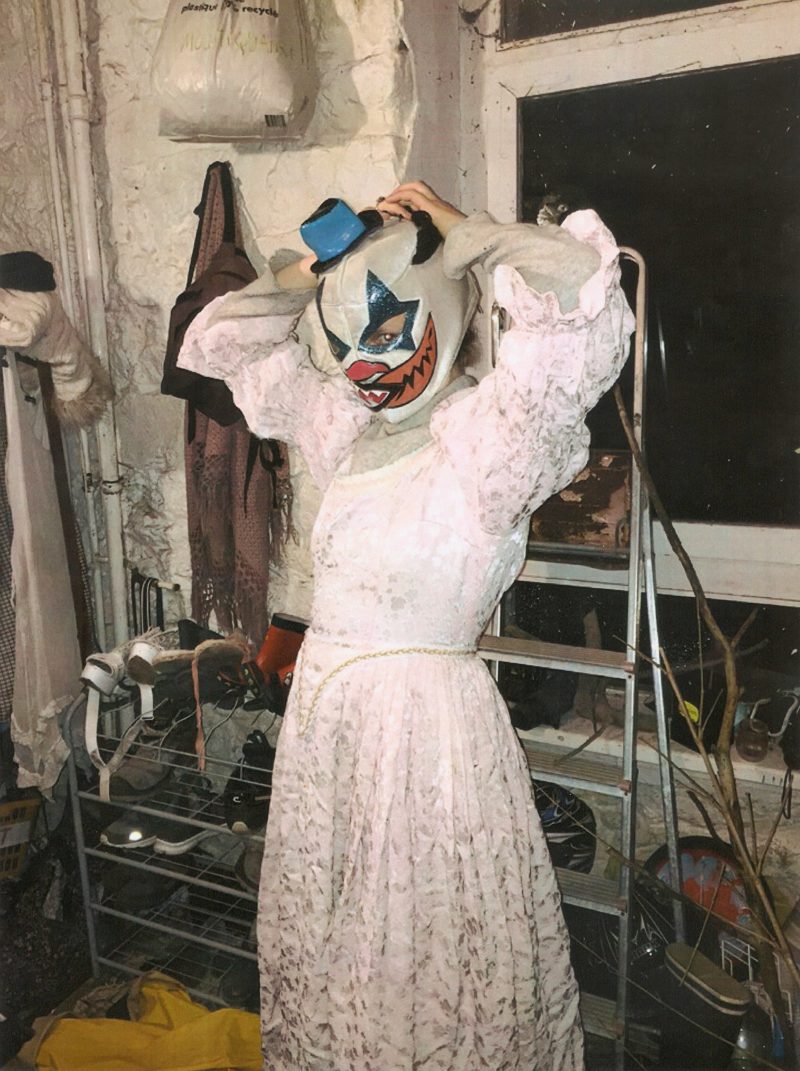 Never mind the intense title, it’s a personal attempt to make a poetic reference. It’s actually mainly about busted synths, trap beats on a Bluetooth speaker facing the Atlantic Ocean, and making music into something doable.
by Eléonore Kenis

“Fiesta en el Vacío” is the title of a short poem by Alejandra Pizarnik (1936-1972), one of Argentina’s major female poets. It could translate into:

this is the call of death.

Only an angel will embrace me in the sun.

But where the angel,

Oh! perforate with wine the sweet need to be.”

“I love her,” says Luna Cedrón, aka Fiesta en el Vacío, the-musical-project-not-the-poem. “Her work is both lyrical and super-depressing.” Pizarnik is often compared to Sylvia Plath for somewhat perfunctory reasons, or extra-literary ones at least: both questioned identity, both struggled with mental illness, both committed suicide. “Poetry may seem abstruse, stodgy sometimes. But when it touches you, it touches you in a different way than prose does in a very unique, hazy way. Beyond the deeply moving expression of angst that they convey, Pizarnik’s poems have a very bright quality. They’re beautiful. And there is something about this particular title, ‘Party in the Emptiness’, that struck me in the face. An image, like a hellish stumble, a tunnel of fire...” As she says this Luna pauses, one eye half closed, a square portion of her cheek going over the edges of her face. We couldn’t find a way to meet actual face to actual face, so we’re video-calling. She lives in Lille, I live in Brussels, and she has just come back from Berlin where she played a few days ago.

When she told me she had to leave for a week, I immediately started to doubt - in both placid and prematurely pessimistic bouts - that I’d be able to talk her at all. So in the meantime, to stave off anguish, I went on a systematic Googlian rambling. Here are my findings: The informative yet appealing paragraph employed by Lexi Disques to introduce Fiesta en el Vacío’s 7”, Brillanza y Orgullo: “Having a rich musical background from flamenco to trap, from French punk to underground club sounds, Fiesta en el Vacío is developing a strange world of her own, dark, fragile and poetic. The present record is bathed in organ-like synth and Spanish singing, very tense on A-side (walking too fast on an empty dark street) and almost numb on the B-side (lost in an unknown bright garden with no way out).” On other sites, it is mainly a question of “cosmic” character, of “romanticism”, of “phantoms”. Brillanza y Orgullo is indeed haunting, like a theatre of shadows and wistful invocations; shiny pieces of jewellery shaped like rotten fruit, hanging from a thread of disquiet; a buzzing green light in the dark and lilac waves of sound that unfurl without breaking. Luna’s music sounds like the night.

Luna María Cedrón was born in Spain in 1992. Then she and her mom moved to South of France. Then they lived in Paris for a little bit. Then in Mexico. “I know I lived in Cuba at some point too… I don’t quite remember in what order.” When she was 9, she moved back to France, to Biarritz, where she spent the rest of her childhood and most of her adolescence until her mom got itchy feet again and they moved to Argentina, before moving back to France again. Well, you get the picture.

She comes from a family of musicians. “My uncle on my father’s side has a fairly well-known tango band called Cuarteto Cedrón.” Active since the 60s, Cuarteto Cedrón released about 30 albums. In the early 70s, they played with Paco Ibañez who invited them to tour in France. They would settle there a few years later in order to flee the dictatorship. “It was a bit of a family thing. Everyone worked for my uncle: my cousins were the luthier and the double bassist in the band, and my older brother played bandonéon with them too.” They’re a fairly classical band and Luna has no musical training at all, except for a particularly aloof stint with the guitar. “I was viewing all of this from afar. Music was ‘their’ thing in a way, and I never contemplated making music of my own. All I loved was sewing, anyway.”

Luckily, the biased idea of “having what it takes” was soon to crumble. “When I was in college in Lille, I was with this guy who composed and played synth, and I had friends with whom we jammed together from time to time... Gradually, music turned out to be something possible, something doable.” She bought herself a synth. Then it didn't work. “It didn't work for a year. It was in my room and I would just look at it.” Sometimes “what it takes” is just time.

“I started my first band a few years later with a friend when I was living in Bordeaux. It was called Stella Dactyl. Back then I didn’t sing. I had bought a Juno 106 from my neighbor but of course it didn't work.” Sensing a sort of pattern here – ah, the synth life. “We had a drum machine, and we synchronized MIDI gear and added a lot of effects. That was basically it.” A short-lived enterprise, Stella Dactyl played approximately two shows, including one in a place called Confort Moderne in Poitiers; it was a party for the end of something, the kind of party where you have to destroy everything. “We used so much paint to tag on the walls that they blocked access to the venue before the beginning of the show. It stank of paint so much that it was actually dangerous. We ended up playing anyway. We’d asked friends to sing but they were completely wasted and somehow managed to disconnect all the pedals. And people couldn’t hear a thing because our amps were so small. Yeah… It was disastrous.”

Meanwhile, the idea of writing lyrics and singing live, a completely abstract notion at first, started to concretize itself in her mind. “The summer I was 24, I had a big Flamenco phase. When I was a kid, I danced Flamenco a lot. So I watched a lot of videos, listened to a lot of music and it really, really made me want to sing. Flamenco singers are very impressive – you don't understand what they are doing, they sound super technical and mysterious at the same time.” It was 2015 or 2016. Luna was still in Bordeaux, starting to get bored and craving to get out of the city. That’s how she landed in Brussels. However, shortly after she moved, her father fell ill and she went to Brittany to be by his side. Once there, she met up again with her nephew, Mateo, her bandóneonist older brother’s son. “Mateo is barely younger than me, and he makes trap. I’ve always listened to a lot of rap so we spent most of our time talking about it and making trap beats in the hospital’s waiting room.”

In the evening, Luna and Mateo would go back to her dad’s apartment and frantically write lyrics in the midst of the fog emanating from the doobies Mateo would be chain-smoking. “I was very shy at first. He would say ‘You just listen to the sound, you listen to it, you listen to it again and again and again, and then you write, and that's it.’ Then he would play the beat on a Bluetooth speaker, and we would train ourselves to sing our lyrics in front of the sea. It was so cool.”

Back in Brussels she kept on writing and started to play live more often. When she records, she likes to sing songs. When she plays live she really likes to rap, too. “I like spoken word. Speech becomes another melodic line with its flow, its emphasis. And, from a more pragmatic perspective, it lends itself to a live process where I never know what’s going to happen on the next bar.”

“I’ve been dreaming of playing modular synth for a while. I’m a bit repelled by the mad price of the equipment and the big ‘specialist’ aura that surrounds the modular practice… Who knows!” But that's another story, and shall be told another time.