Editorial Issue n° 6
Dear reader, You are holding the 6th edition of our irregularly published newspaper. It presents the second edition of the great collaborative project called Eastern Daze. For those who missed out the first edition: it’s a one day festival and draws you into the immersive effect that trance music supposed to have. It leaves you with a burning ache in between your ears, or stomach. Depends what you engulf too much, the music or the hallucinogens. It hints towards an euphoric feeling caused by becoming part of the collective, a drop in the ocean as zen buddhists say.
by Niels Latomme
Antti Tolvi
Antti Tolvi is one of the key figures in the Finnish improv scene emerged in the beginning of the 00ties, spoiling the world with loads of stunning, highly inspiring tapes and cd-r’s. Tolvi grew up in Panelia, as small village at the coast of Finland. He studied Indian Classical music and played in cult bands like Lau Nau, Lauhkeat Lampaat and Kemialliset Ystätät. Last year he stunned the world with a three side vinyl, called ‘Pianoketi’ (Fonal), on which he displayed three beautiful minimalist improvisations an a detuned piano. The pieces weave fragile textures of slightly outworldish tapestry, referring to Terry Riley and Lubomyr Melnyk.
by Pauwel De Buck
Sarah Davachi
Sarah Davachi is a young canadian composer and musician. She explores deep spaces of hardcore minimalism through the magical rots that avant-garde music once produced: analogue modular synthesis. Here music is rooted deeply in the mystic tradition of drone music. More specific, the beautiful branch planted and cultivated by two other grand ladies in electronic music, Eliane Radigue and Laurie Spiegel, with whom she shares the same interest in overtones hidden in the potential of electronic an acoustic instruments. For the records: Davachi holds a master’s degree in electronic music from the famous Mill’s College.
by Jannis Van De Sande
Arnold Dreyblatt
Arnold Dreyblatt is an American Minimalist composer for whom the idea ‘cult’ seems to be invented. His body of work explores new forms of transcendental rhythmic minimalism, played on prepared instru- ments—like a double bass with piano strings. Just as his visual art, Dreyblatt’s music works as a ‘rethinking of identity, history, culture, and memory’. His c.v. reads as an impressive who’s who in the minimalist canon: student of La Monte Young and Pauline Oliveros; and records on legendary labels like Hat Hut, Tzadik, Table of Elements and most re- cently Oren Ambarchi’s Black Truffle label.
by Cristina Amelia Messer
Ashtray Navigations
Phill Todd en Melanie Delaney are the core members of the legendary British noise duo Ashtray Navigations. Called after an album by an obscure 70ties psych band, they produced since 1991 an endless stream of cd-r’s tapes and lp’s embodying an unique form of British pyschedeliae. It’s a trashcan full ow wild tape collages, far out electronics, pastoral drones and acid guitar soloing. No wonder the great VHF records released last summer their new and highly recommended album ‘a shimmering replica’. We sat down, passing the wires of the www, with Phil and Meg and talked about ethnic music, the Northern England DIY scene and On The Beach.
by Niels Latomme
Err No ag_articleType
by Niels Latomme
Artwork issue n° 6 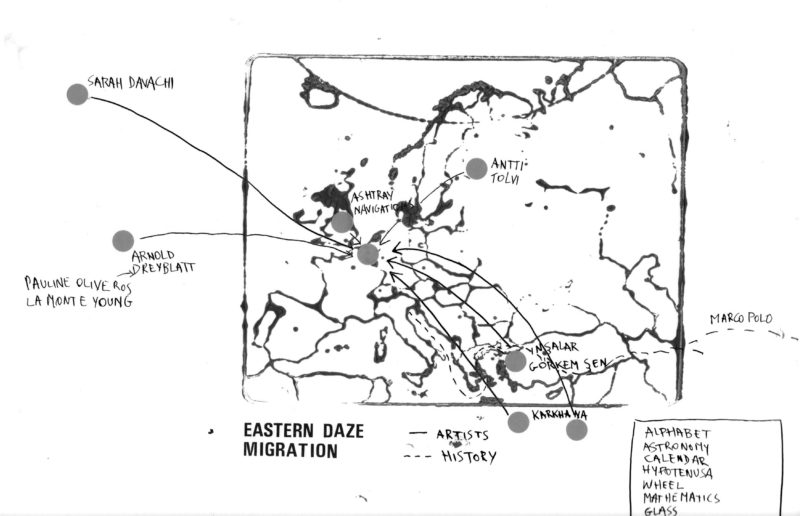 by Watcharita Aroon Claire Stragier
Görkem Şen
Görkem Şen's first musical memories are the quirky, self invented songs a childhood friend of his used to sing. The complete freedom of expression in these unlocked something deep and fundamental in him; a need to say something that was personal and original.
by Wouter Vanhaelemeesch
Insanlar
Once in Istanbul, on the Taksim square, my attention got drawn towards an old man in a wheelchair, covered with christmas lights. He played a one-stringed banjo, and chanted strange rants. The first time I heard Kime Ne, the debut album of Insanlar, it reminded me of this magical moment of outworldish beauty—to be found on one of the many obscure streets in this overwelming and labyrinth-like city. In a similar way, Insanlar seemed to come from nowhere. Digging deeper, I found out that they emerged out of the Istanbul underground jam and club scene, blending transcendental sufi jams, Anatolian Rock music, 17th century poems with electronics. Insanlar is based at the MiniMüzikhol, a club which covers an array of genres, incorporated at an old cultural building, just a stone’s throw of the famous Taksim square. We sat down through a dirty sounding Facetime connection and talked with Insanlar’s Barış K, about his inspirations and about the world in which Insanlar started.
by Niels Latomme