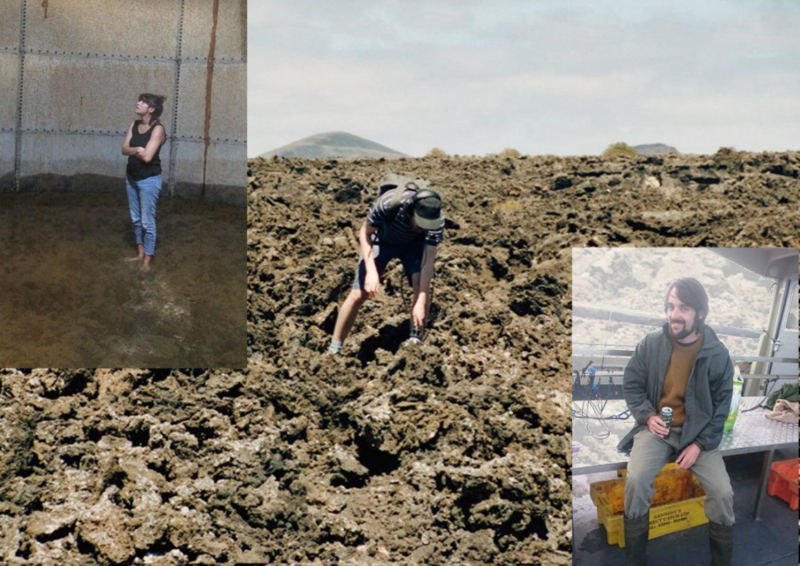 Italians use the expression 'al fresco' to mean 'in the chill' or 'in the cool'. ... When tourists are in a restaurant and want to eat outside, they usually say they want to eat 'al fresco'. This is a funny mistake. In Italian, the expression has a completely different meaning. 'Al fresco' literally means 'in prison'! Al Fresco, the outfit we are discussing here, describe the phrase as (outdoors) -- literally, “to fuck outdoors".
by Mark Harwood

Al Fresco, a fairly new London-based trio, is comprised of Lia Mazzari (cello, whip), Tom White (electronic and concrete sound) and Sholto Dobie (hand made instruments). These three friends came together not only as musicians but as organisers also, having established their own event programmes - Silver Road (Mazzari), Apologies in Advance (White) and Muckle Mouth (Dobie). From this shared background they assembled themselves as a creative unit, somewhat unconsciously, in order to explore constructed freedom and the combined nuance of their individual practice. I caught up with the members at a pub which moved into a park and then on the street after we were promptly ejected from said park by an overzealous park ranger. The conversation ran through thoughts on improvisation and composition, beauty in music today and why they have a name for the unit and why that name is Al Fresco.

The artists outline their operative as an exploration of the tension which arises between melody and texture, silence and repetition.  In their individual exploration there is a tendency to explore their chosen fields in both compositional and improvised methods. Tom speaks of this collaboration being more restrained than his solo methods: “There are no grand gestures which may appear in my solo work”. Mazzari explains further, “This works in a more linear way as opposed to the usual build up > climax method which often appears in collaborative works of this nature”. Dobie agrees when I suggest that their explorations occur between composition and improvisation, adding, “I’m personally interested in these things that are not based on a direct dialogue of individuals but more a layering of things and I think that happens a lot in what we do: a layering of blocks that sometimes end up in weird combinations that don’t necessarily fit together, sometimes these are resolved whilst at others it may cause tension”

Restraint is also at the core of the Al Fresco methodology. Mazzari identifies this as a reaction to all the “noise” of the 20th century whilst emphasising the distressing amount of media noise we are all exposed to in this current age.  It seems to be more common that people are reacting in an opposite direction presenting quieter, calmer works with more of a spacious and considered approach. The outfit explain that they also enjoy exploring beauty and hinting on melody. We discuss the general lack of these elements in much 20th century experimental music which tended to lean towards more abstract realms. Incorporating these once heretical elements is something all members seem to agree they enjoy a lot. Dobie raises the point that many consider emotional music too manipulative but has no problem recognising this and incorporating such methods as a working as a tool. The working method involves rehearsal which allows spaces to open up, which are then worked into the live sets.

Al Fresco as a unit, having a name separates it from classic improvisation - it’s not a fixed state and Sholto remarks it will evolve in the future allowing other players into the fold. Much of Al Fresco’s approach seems somewhat oppositional to various 20th tropes which have become some kind of new normality. This open ended unit seems to take pride in gently peeling away the expected whilst having fun formulating a collective experience resulting in works both gentle and unexpected.

Sitting down with the three members of Al Fresco on this average summer evening one can  detect an extremely positive energy surrounding the outfit, as friends and as a creative collective. Al Fresco resides in a unique orbit built around a confident call for calm.

Editorial issue n° 12
A MANUAL FOR RETHINKING COMPOSITIONAL PRACTICES.
by Niels Latomme
Ben Knight & Tom White
Visual artist and composer Tom White is a specialist in brutal yet sensitive reel-to-reel tape manipulations. Ben Knight works as a performing artist and musician in the deep universe of the voice and…
by Henry Andersen
De Neus Van God
The first De Neus van God emission of 2018 is all about the 6th installment in the Braublff (materie und laut) series by KRAAK and DE PLAYER and about the debut LP by Razen’s Ameel Brecht. In the firs…
by De Neus van God
Best records of 2017
De Neus Van God handpicked a fine selection of records and concerts that impressed them during the year 2017. In a random order.
by The Avant-Guardian HQ's
De Neus van God
A pseudo summerish edition with tracks by the finest belgian and international underground and neo-romatic vitalist composers, some field recordings and proper pop songs.
by De Neus van God
De Neus van God
A summer editions with music, tour comments and some exclusive beer tips by Perry Kraaivalk.
by De Neus van God