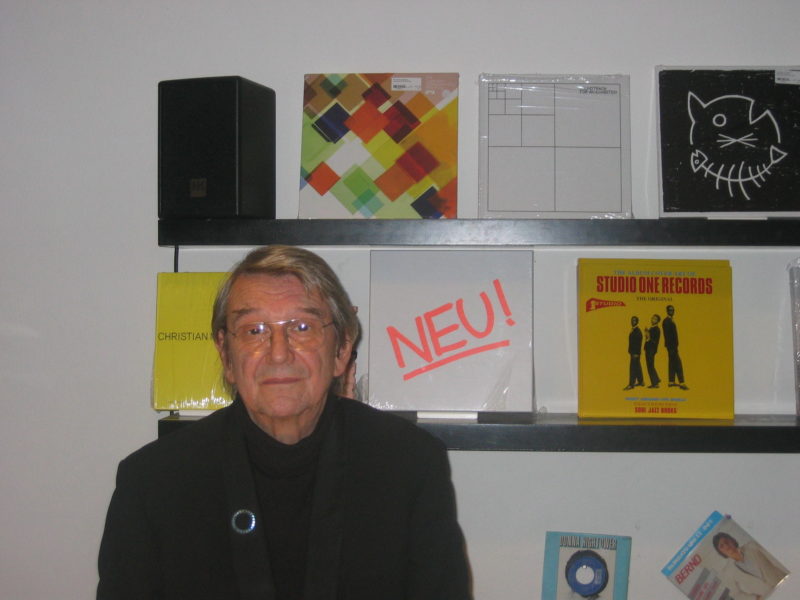 NUANCES IN SELF-SUFFICIENT MUSIC. Asmus Tietchens – a name that popped up about 40 years ago for the first time on an album of ambient music by Cluster&Eno (1977) and can be found in various fields of electronic and experimental music ever since, mostly on the fringes of certain genres like industrial, synth-pop, acousmatic, reductionist electronic music or krautrock. It’s hard to fix his position to a specific scene, instead he seems more like a curious and peculiar mind working his way through all the spheres that catch his curiosity. Although he can be classified as a consistent solo-artist, quite a few collaborations have been exercised with people like the percussionist Jon Mueller, the reductionist electronic composer Richard Chartier, Chrysanthemums’ Terry Burrows or his duo Kontakt der Jünglinge (a combination of two the title of two early Stockhausen pieces) together with media-artist and composer Thomas Koener. He also appears on an album by the ephemeral Krautrock band-project Liliental (one of the few records featuring studio-wizard Conny Plank as a musician), probably the only real band he ever played in, not to mention his general dislike of most Krautrock.
by Marc Matter

But let’s start at the beginning: Asmus Tietchens was born in Hamburg (*1947), has lived there ever since, and works there mostly in the studio of his old friend Okko Bekker – a composer of filmscores and advertisments who also guest-starred on the Cluster&Eno album, but has also produced whole works together with Asmus, most notably a concept-album called E that contains succesful imitations of modern classical and avantgarde music. His attachment with the city of Hamburg is close: being a key-figure and a close inspiration to a younger generation of experimental electronic musicians such as Felix Kubin, who admired Tietchens as a kind of chinese master, a laughing monch, an existentialist audio-scientist leaning to impressionism who produces real science-fiction with his music. He also used to be involved in the infamous Odradek fanzine, has been rumored of being behind the mysterious Werkbund and Mechthild von Leusch projects together with Uli Rehberg aka Ditterich von Euler-Donnersperg (Tietchens repeatedly denied his participation) and still co-runs the monthly Hörbar events of experimental music in a small cinema (B-Movie). Even his dayjobs that he once had to execute for the sake of his parents’ peace were typical for Hamburg: trained as a tradesman working in the harbour and later being a copywriter in the advertising business.

Confronted with early german electronic avantgarde music and french musique concrete on the night-programs of germany’s state-radio as a 12-year old kid, because he somewhat felt obliged to follow the development of the arts as a grammar school student due to his vanity, this kind of music caught his curiosity. The idea to make music himself developed, and after giving it a try with guitar-playing which failed due to his left-handedness, he started tinkering around with splicing prerecorded tapes and doing random collages of found sound and music as a young teenager. In the mid-60s he systematisized his approach and got access to a Revox tape-machine, and his first piece of tape-music dates back to 1965. Making music continued as a hobby for 15 years, before getting the opportunity to make it public. The LP Formen letzter Hausmusik (transl. Last forms of family-music, 1984) that was released by Nurse With Wounds Steven Stapleton for his United Dairies label contained mostly material dating from the mid-70s. His active entry into the music-scene as a composer was via the industrial scene, not only releasing on the NWW label but also on Esplendor Geometrico’s later on, but he does not call his own music industrial:

he tells me in a telephone interview.

“atonal veteran Asmus Tietchens will never lose his reputation as a hippie-electronic (musician) because of his releases on the german Krautrock-label Sky”,

although he still respects these records for what they are: synthie-pop.

While also some of his experimental pieces work with rhythms and repetitive patterns, his current compositions however are rather abstract, sparse and stern, a music not easy to access but starring an idiosyncratic beauty; they explore very subtle differences in tone, texture and sound while not hesitating to use silence as an element. He is more and more interested in nuances:

After starting out with tape-collages and going through phases of synthesized music and a long period of mixing both, he is back to pure electronic sound:

“nowadays i hardly work with concrete sound-material like field-recordings anymore, but use synthetic sounds”.

Nevertheless, two of Tietchens relatively recent radiopieces that he composed for the WDR Ars-Acustica broadcast series exclusively use concentrated field-recordings: Trois Dryades is based on microscopic recordings of a tree that is cut, and Sechs Heidelberger Studien on recordings of an old Heidelberger printing-machine. Both were awarded with the Karl-Sczuka Price for Radio-Art in 2003 and 2006. Unlike other artists who start out radical only to become tamed by habit, his musical abstraction and quaintness increased over time and moreover his curiosity lead him into different genres and styles without losing a certain kind of handwriting.

Some of Asmus Tietchens recordings display a twisted sort of humor: an LP of seemingly lost tapes by german hardrock band The Scorpions trying out some electronic Krautrock (of course NOT produced by The Scorpions but by Tietchens in collaboration with Felix Kubin aka Knoth and Tim Buhre as Spiders on Phasing), or the Aroma Club series containing bizarre synth-pop with matching artwork are funny though sarcastic examples of his broad approach to electronic music and his playful mocks on musical trends and genres. In some of these projects he uses pseudonyms which happen to be anagrams based on his real name like Tussi Schemante or Achim Stutessen. Artwork and album- or tracktitles (which are, beside a few exceptions, all in german) are further dimensions in Tietchens records in which a jejune kind of humor can be found in homeopathic doses, but besides of that, he considers his music to lack humor. It might be a specific critical sensitivity and playfulness within the way he approaches music, art and life, making him more of a dandy-noir (more in a spiritual sense instead of a blasé fashion-attitude) than a tongue-in-cheek ironymonger.

Asmus Tietchens doesn’t mind to talk about his music before his performances, and he is a great talker. He is also a gifted writer of critical essays on experimental music or linernotes for records by Cluster, Günther Schickert or Institut fuer Feinmotorik that contain remarkable literary qualities. However, he considers his music a music without words, a kind of absolute music – a concept dating back to mid-19th centuries hardcore romanticism – a music that is absolutely self-sufficient, that is not about or stands for something but for itself, that does not intend to provoke specific thoughts or feelings amongst the listeners (he is a diligent listener of his own music by the way) – in that way being as open for interpretation as it can get:

“I have no messages to spread, and I dont know to whom I should address those”.

But nevertheless, he can’t help but stick to his habit to include a quotation of the thinker of extreme pessimism EM Cioran on each record since Seuchengebiete (transl. Pestilence Fields, 1985); thats because he really wants to share those aphorisms – not because he wants to entertain the listener, but to show what intellectual influences he bears. Thus he is not reflecting a worldview or philosophical convictions through his art,

“there’s still some philosophical background noise that inspires the music.”

“an attempt to establish a maximal ‘human-distance’”.