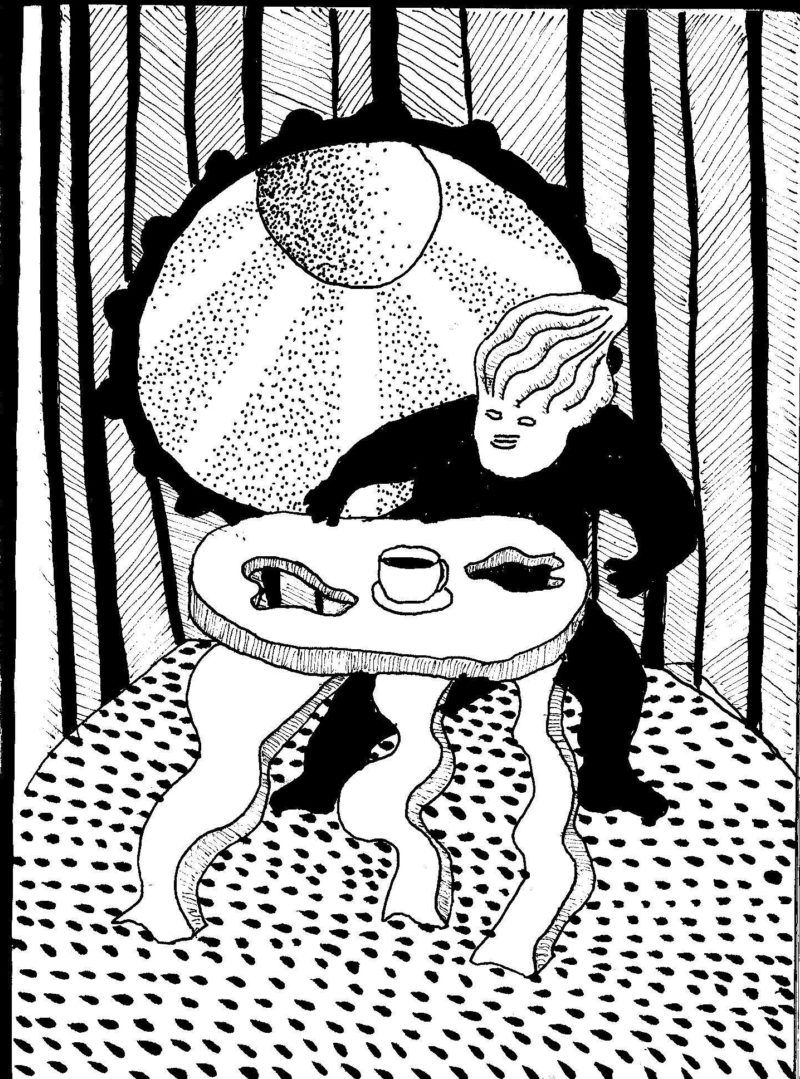 Aptly referred to as a “discreet veteran of the Brussels underground”, David Jarrin and his myriad projects have been simmering beneath the cacophony for the better part of the last two decades. But the simmer is boiling over.
by Gabriela Gonzàlez

As part of Amanita Vulva, he joins other like-minded seers in creating primal territories to explore and bequeath. As Disposición Asoleada he maintains the persona of the circumspect observer, the reserved, bespectacled presence who, much like the birds that follow and inhabit him, exudes an honest melancholy that transpires in his introspective, trance-inducing melodies. Banjo, incense, the sound of nature and the souls of the present and the departed are all elements that fuse into a reverie of Jarrin’s own making. Under the glowing lights of the Cirio and drowned by the chatter of tourists and the warmth of a half and half, Jarrin laid out his thoughts about his project and much more — not quite a manifesto, but a mindset, a place where the Andean páramo, hummingbirds, ravens, eastern European playing grounds surrounded by birch trees, and wise old men who never cheapen themselves can comfortably coexist and weave sounds into dreams and back into the soil from whence they came.

I began making music in 2001 using a computer and dreaming of doing stuff close to the Japanese and German records of the early eighties that were constantly played on Brussels’ Radio Campus. At that time, I also wanted to write, but my literary and academic endeavors were not satisfying. I love poetry but somehow my mind never materialized into something that felt personal in that domain. Whereas with music, I found a form that suited me better.

After my first EP was released by the Brussels’ label Chelonia Mydas under the moniker Desliz — and some very uncomfortable concert experiences — I realized that I could not afford better musical equipment and that I wanted to work on sound using the most rudimentary means, very much like my beloved African, Asian and Latin American records or the rural and street musicians that mesmerized me in my childhood. At that time I used to fingerpick a lot with my nylon guitar just to make sadness go away when it crawled on my lap. I decided to record those intimate and reflective moments and do something with them. And that’s how Disposición Asoleada began, like a little girl personal diary with dried leaves, little poems and drawings.

I don’t play live very often, therefore I need to create a framework where my hands and instruments can grow and wander. Incense helps me to create that space. This and my fernlike way of building my pieces may lead to think of a trance or shamanic inspiration in my work. The truth is, I don’t like how the term shamanic is used in the context of art. It implies that any work is bestowed with an unfathomable power, and its creator is beyond our earthly comprehension, which, obviously is not the case.

The Andean mountains around Quito, where I was born, are part of my story. The first sounds and images that moved me come from that scenery. I am sure we all have little instants and spaces of bliss that define what we do, what we are and to which direction our mental branches and roots will lead us. For some people, this can be an enigma, for my part, I’m sure that I know a small portion of it. For instance, I am sure that my fascination with birds comes from the days when a small brown hummingbird would wake me up in the mornings in my early childhood. It knocked at my window as it came to drink the little water drops left by the morning dew. Since then I have always loved birds and that’s why much of my studio work deals with bird songs, flutes and whistles.

Russia is something that’s really important to me, is the realm of my childhood, at least one of the foundations of my emotional universe. I was born in a Russophile household in the context of the nowadays somewhat forgotten dispute between the conservative, colonial and mostly American influenced culture and left-wing Latin America that had a heavy imprint of Russian books and referents. The first stories that were read aloud to me, and my first emotions as a reader of books come from there. Of course, afterwards I had the chance to move to Moscow and learn the language, and here, in Belgium I studied Russian literature at the University. I am by no means a specialist, I just clumsily love that culture and poetry. Anyway, through that world I discovered the very concrete reality and sweet delight of creating imaginary worlds, spaces of rich subjectivity by the swift combination of two or three words, that explode in your mind like utopias in a lightning.

This mindset is very present in my music projects, in Amanita Vulva, in Disposición Asoleada. It explains my use of incense in my live performances where I hope the smell may create a tiny crack through which listeners may visualize an atmosphere, a scenery. While I play I imagine landscapes with all sorts of details, stones, broken windows, trees, empty glasses... For me, this is a political act of briefly creating a new harmonious realm beyond the ruins of our current world, but also a modest step in the colossal enterprise of rebuilding this planet from scratch. It’s a beautiful thing to think that although this world is a mess, we carry our own world within, in our hearts, which will be there even when everything else crumbles down.

It’s an act that’s present in a lot of the music I love — in Indian music, in pygmy polyphonies, for example. We all come from different places and have different backgrounds, but when we sit down to make music we create a new world, a world in harmony. It’s funny in my case, I often get asked about my background and how it’s shaped me. We waste too much time on these questions: the question shouldn’t be where we come from but where we’re going.

There is a musician from Ecuador  named Mesías Maiguashca who started as part of the laboratories founded by the Instituto Torcuato Di Tella — a centre for sound experimentation in Argentina — and went on to become one of Stockhausen’s assistants in Cologne. He’s still around and very active. He played with Holger Czukay and a few times with Can, and he came to the conclusion that, despite his indigenous origins, he refused to play the identity card and instead decided to create a space that was his own — his personal universe where, through his music, he could transcend all of that. He went on to create his own type of cosmic music, unlike Kosmische Muzik and unlike Stockhausen’s compositions. He even told Czukay that rock is too linked to identity for him to find a place in it. It’s interesting because, afterward, he did a complete 360° turn and went back to Ecuador in his work, back to his roots in a sense. He made pieces based on Castañeda’s work, as well as on Boletín y elegía de las mitas (a poem by the Ecuadorian poet and mystic César Dávila Andrade); of the latter he made a beautiful abstract piece which conveys the suffering of the indigenous people but in such an intensely personal, out-of-this-world manner that Ecuadorians were dumbfounded when it was presented. For me personally it’s very inspiring to see a musician coming from my country who avoided making whitewashed folklore music, who avoided following the footsteps of Stockhausen, and who paved his own path to express something that goes beyond superficial identity, something deeply personal that is meant to be experienced directly and viscerally by the people who listen to his music. And while his work is not a direct influence on mine, it’s that attitude and that mindset that is completely fundamental to the way I approach the act of creation.

De Neus van God
A curated edition, compiled by David Jarrin aka Disposición Asoleada, for theoccassionn of his concert at Het Bos on September 30th.
by De Neus van God