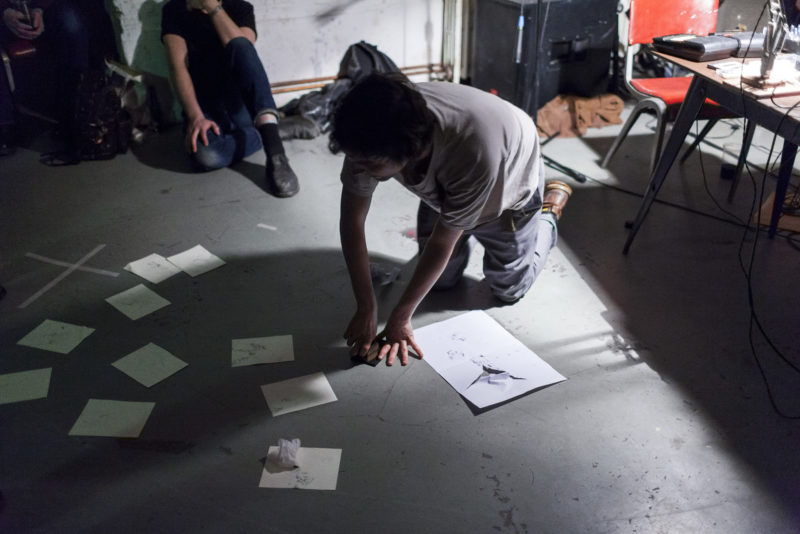 Over the last 12 years, Brighton based Duncan Harrison has been one of the driving forces in the South English Weird Noise scene. In his music, he displays a broad array of cut-up sound poetry, improvisational strategies and audio collages with sonic left-overs abstracted from daily environments. Not surprisingly, he regularly collaborates with the likes of Dylan Nyoukis, Karen Constance, Pascal Nichols, Ali Robertson and many more. As he features in the Braublff 6 program, we interviewed him about his work.
by Niels Latomme

Duncan, you’ve been around in the improv scene for some years now. Tell me how you got into music and how that lead to the music you're making now?

It’s not a very interesting story: for as long as I can remember I’ve just loved music and idolised the people who make it. I think the first thing I ever announced as a child that I’d be when I grew up was a drummer, though this still hasn’t happened. I had little dalliances with various instruments throughout childhood but began to take playing music seriously as a teenager when I saw that my efforts to teach myself guitar and bass were actually bearing fruit. There hasn’t been a time since those days where I’ve not been actively making music of some kind, be it in a band or alone.

It’s hard to pinpoint when I first discovered the kind of thing I’m making now because I still feel like I’m in the same process of finding connections between different kinds of music that I was as a teenager. Though those years were mostly filled with Metal and Punk  – which of course lead you to more extreme sounds – I was still actively checking out electronic music as well as absorbing stuff from my parent’s record collections – Beefheart, Velvet Underground, Zappa, all kinds of progressive rock and even obscure classical things. All of the above serve as routes into ‘noise’ or ‘weird’ music in some way but I suppose it was and is the overall thrill of appreciating this giant, eclectic world of music that most accurately translates into what I’m up to today.

Practically speaking I was always experimenting with whatever pieces of equipment I had amassed from playing in bands: amplifiers, guitars, microphones, keyboards, effects and so on. Playing around like this on your own gets you used to absorbing abstract noises in the space of music; blasting feedback out in your bedroom while thinking you’re in Black Sabbath or wondering what will happen if you plug some shitty casio into a multi FX pedal. All that needs to happen next is you hear Merzbow or Hanatarash and realise it’s perfectly ok to record these sounds on a tape or CD-R as it’s own kind of music. My feeling upon discovering this kind of practice was not ‘Huh? Why?’ but ‘oh, of course.

A lot of people who were into noise ten years ago started making synth music, while you released a consistent body of work of tape collage and sound poetry. What is your opinion on this evolution, do you even agree it's there?

It’s probably quite generous to say I’ve consistently released tape collage and sound poetry because there are fairly distinct patches of my back catalogue that aren’t quite as... refined as that...though I suppose to some extent components of these things have always been present in my work so I’ll accept that description if you like.

The basis of my approach stems from having backed myself into a corner creatively while making harsh noise. It was fun and I still love to listen to this kind of thing but I ran out of new places to take it myself and began to lean toward a more variable style rather than all out, high volume energy at all times. So, by the time I killed that old project off and began to release things under my own name the only goal was to develop my music and evolve as was natural rather than find one new distinct style that I’d grow bored of in a couple of years. I wanted some kind of consistency between everything I put out and I suppose that would be what I was trying to communicate or embody from recording to recording rather than just the way it sounded. For me, at least, the process of recording, editing, arranging and re-presenting various kinds of audio remains the most fruitful and engaging way to pursue these preferences.

I suppose also that while many noise artists begin as ‘non musicians’ and perhaps end up developing more traditionally musical abilities and interests, I started making abstract work as somebody who had been playing ‘real’ music for a few years already and have continued to do so alongside my solo work. Because of this, I don’t think there is much chance of my music developing into some kind of techno or synth project. Too many years spent bored shitless by guitar guys, to begin making music that is just a showcase of your equipment collection or current record purchasing habits. 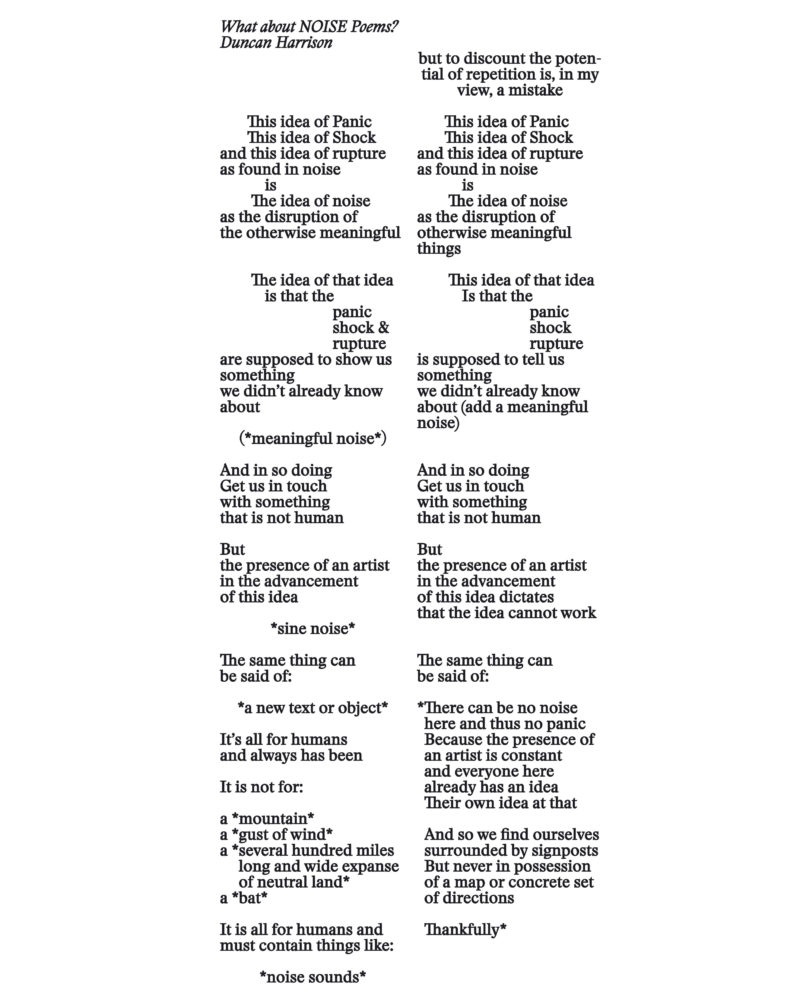 I like the way you blend performance with sound and music. Why is that? I sometimes have the feeling that music is looking to other arts (like visual/performance arts, inspired by the fluxus movement for example) to find doors to new forms and ideas. Is music in itself tired and worn out, did it run out of inspiration?

I’d agree with the statement that music is looking to other arts for new ideas and would say this has been the case for a very long time now. All these different media have been converging and borrowing from one another since long before you or I were born, for example, and I dare say they’ll continue to interact after we die. In fact, most influential thought of the last century as concerns music could, on quite a significant level, be described simply in terms of ideas more commonly associated with Fine Art and Philosophy being applied to the spaces and cultures of music, so perhaps ‘music’ in it’s more traditional forms and contexts is a rarer thing to encounter today than whatever it is we’re working with now.

Even so, music as a phenomena still seems to come under more fire than other art forms when things reach the Avant Garde; getting more frequently accused of being dead and/or having failed to progress past the glory days (ironically, each decade seems to contain any number of these glory days depending on who you ask). Maybe there is some truth to a few of these accusations from a purely methodological stand point but I don’t understand why the value of music as an aesthetic pleasure alone is so often overlooked. Many people talk about experimental music being useless and illegitimate unless it does nothing but push buttons and test boundaries yet you and I wouldn’t even be talking right now if thousands of people across the world didn’t just enjoy the way all this weird stuff sounds.

In any case, I choose deliberately to work within the awkward boundaries of music precisely because of how delicate and easy to manipulate they can be. One can pour a bottle of wine down one’s trousers in a gallery and have no problem insisting that it is art, but to do it in a rock club and insist that it is music produces altogether more extreme and noteworthy reactions.

Tell me about your last release. What does the title mean, and what is happening on the tape?

Preamble to Nihil is something of a precursory piece to an as yet unfinished full length album that I’m working on. Because it’s still being conceptualised and recorded I’ll not reveal much of what it’s about besides to say that it – in part – continues ongoing themes and questions surrounding Nihilism and meaning that have found their way into performances, texts and recordings I’ve worked on over the last few years. The tape itself is made of several shorter sketch recordings that I was keeping around in order to potentially use them in the album but as the concept of that project began to define itself further I found they had done more to distract me from it than help it along. In the end I decided to collect and issue them as a separate release in order to build the full length out of totally new ideas and materials more relevant to the themes in question. While this doesn’t necessarily need to be of note for anyone else, I’m personally quite interested in how that release was formed from a detached, blasé act of tidying out vs a separate, unfinished project of meticulous planning and crafting. It is a nice antithetical companion to the album that will come next.

What do you think of the key idea of the Braublff series, to research the zone where language/words become music, or on a deeper level, where non-musical actions can become music?

Any kind of interrogation as to where, when, why and how non musical information can be received as music is worthwhile to me. Language and voice are very basic, stripped down tools in the wider context of music making and so I find them especially intriguing in terms of their potential to base complete works on. I am always interested to see what somebody can do with just their voice and body in a recording or performance; I certainly challenge myself to expand my own use of these devices as much as possible. Beyond overtly musical or performative uses of the voice I’m also interested in how common and ubiquitous information transmitted via language or gesture can be manipulated and re-presented as art. Since nearly everyone possesses a voice and language too, there is potentially limitless variation in what can be achieved by using them creatively.

In your live performances, there seems to be a fine line between the comical and the disruptive. Do people laugh, because they don’t know how to respond, out of confusion? Or do they laugh because they think it’s funny?

I wish more people would laugh for ANY reason. Perhaps it’s mainly the audiences here in the UK but it can often be next to impossible to get a single sound, comment or reaction from the crowd until you announce that you’ve finished. Most of the time I struggle a bit with this but then again, one of the best things about playing live is seeing how long you can make an audience stand and watch something totally boring or ridiculous (or, in some cases, nothing whatsoever) with a kind of painful, nervous patience. Manipulating audience expectation can be a very effective dynamic and even compositional tool in terms of delivering a performance. The delicate balance between something unnerving and entertaining is important in this regard, though difficult to achieve.

I can’t tell how the audience feels as a whole though it must be said I’ve had nearly all positive comments about live shows so far which, ultimately, is what I want – for people to enjoy it. The thing is, even in the event that I’m somehow succeeding in appearing very funny, engaging and entertaining, performing is usually quite an intense and nerve racking experience for me too.

Editorial issue n° 12
A MANUAL FOR RETHINKING COMPOSITIONAL PRACTICES.
by Niels Latomme
De Neus Van God
The first De Neus van God emission of 2018 is all about the 6th installment in the Braublff (materie und laut) series by KRAAK and DE PLAYER and about the debut LP by Razen’s Ameel Brecht. In the firs…
by De Neus van God