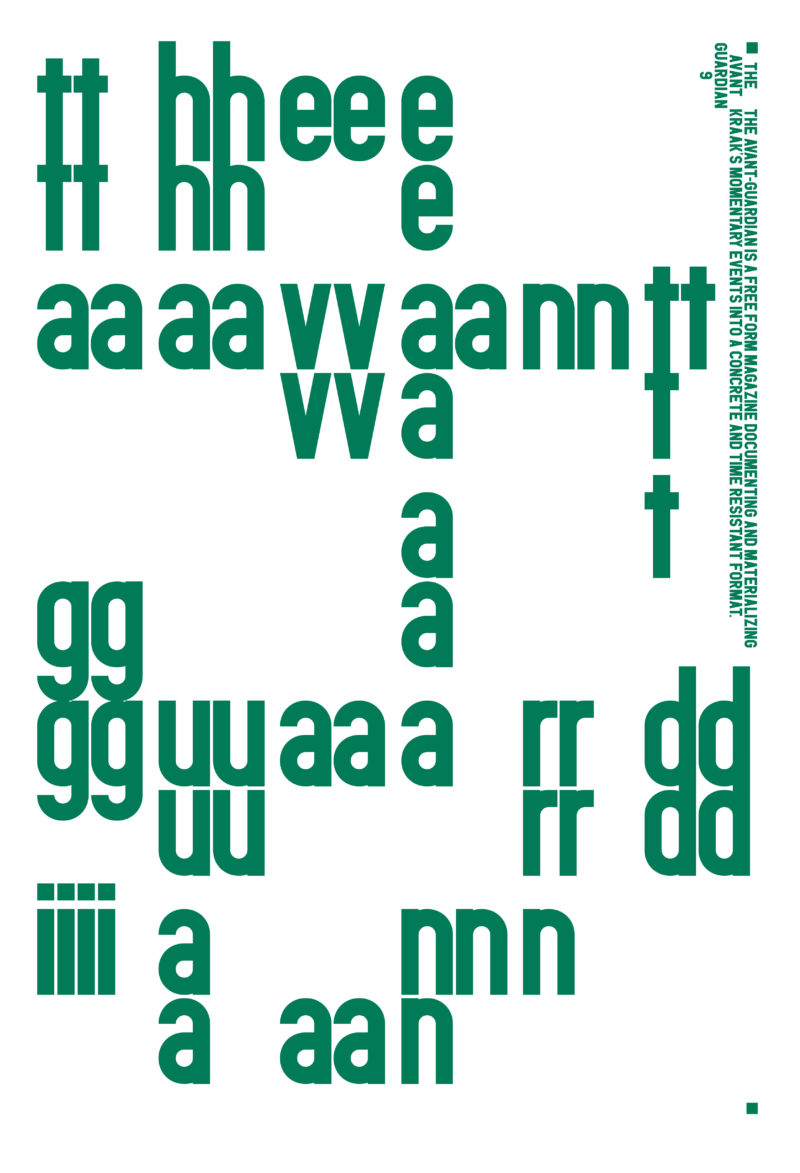 Dear Reader, The Spring is halfway through, and we are gently sliding into the Summer. This is a new edition of the Avant-Guardian, covering KRAAK’s program since January. This edition is for you. You can read it when you are sitting on a terrace, nipping of you well deserved Ricard or white wine, and mesmerize about the evolutions in off-stream music we presented last months.
by Niels Latomme

In the moment of a similar experience — sitting on a terrace — we encountered Mekhitar Garabedian. Mekhitar is a good friend and foremost a great visual artist. He was thinking aloud about this magazine, and expressed his admiration for its format.

What I remember from our loose conversation, is him telling that if you want to make something sound like it’s coming from Armenia, you just should add ‘ian’ to a name. Mine would be Niels Latommian, for instance. It stroke me as funny, but also to the point in it’s absurdism. It suddenly became clear that from that point of view The Avant-Guardian presents itself as an outsider. A stranger that curiously watches a community to which he seems not belonging to.  At the same time, The Avant-Guardian is actually part of it, as he presents himself as a trickster, by altering the sound of his name into something unkown and exotic. While he is actually deeply rooted in that community.

Meki (we call Mekhitar ‘Meki’) liked the name as well because it incorporates a paradox. It’s proclaiming to be avant-garde, but also to be the guardian. It appeared to me that this an excellent position to stand with both feet into the contemporary social state of mind. It is an old school way of distributing new information about bands and musical acts. It’s far from transparent, and it’s — due to its physical format — not available everywhere and at any time. It is notorious for its belated timing.

But that it’s beauty, as it guards and cherishes the ‘avant’, the things that came before.

That’s why it covers concerts, which already passed. The Avant-Guardian is as such a platform to let you image and dream about events in the past, wondering how they have been; or, if you were at the event, to let you look onto it from a different angle, because you finally got to know where this or that band came from, what they think, why they make certain (musical) choices.

And so we become enriched with different experiences, insights and emotions.

I wish you a very beautiful summer.