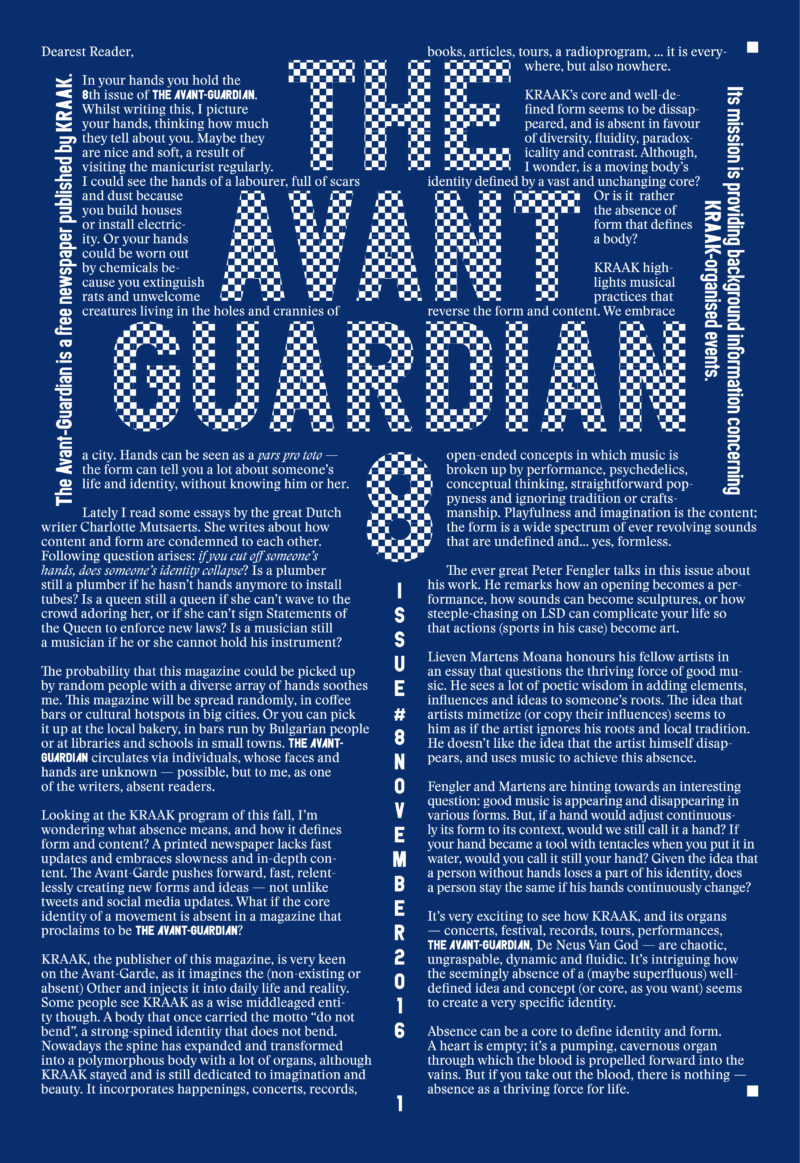 DEAREST READER, In your hands you hold the 8th issue of the Avant-Guardian. Whilst writing this, I picture your hands, thinking how much they tell about you. Maybe they are nice and soft, a result of visiting the manicurist regularly. I could see the hands of a labourer, full of scars and dust because you build houses or install electricity. Or your hands can be worn out by chemicals because you extinguish rats and unwelcome creatures living in the holes and crannies of a city. Hands can be seen as a pars pro toto — the form can tell you a lot about someone’s life and identity, without knowing him or her.
by Niels Latomme

Lately I read some essays by the great Dutch writer Charlotte Mutsaers. She writes about how content and form are condemned together. Following question arises: if you cut off someone’s hands, does someone’s identity collapse? Is a plumber still a plumber if he hasn’t hands anymore to install tubes? Is a queen still a queen if she can’t wave to the crowd adoring her, or if she can’t sign Statements of The Queen to enforce new laws? Is a musician still a musician if he or she cannot hold his instrument? 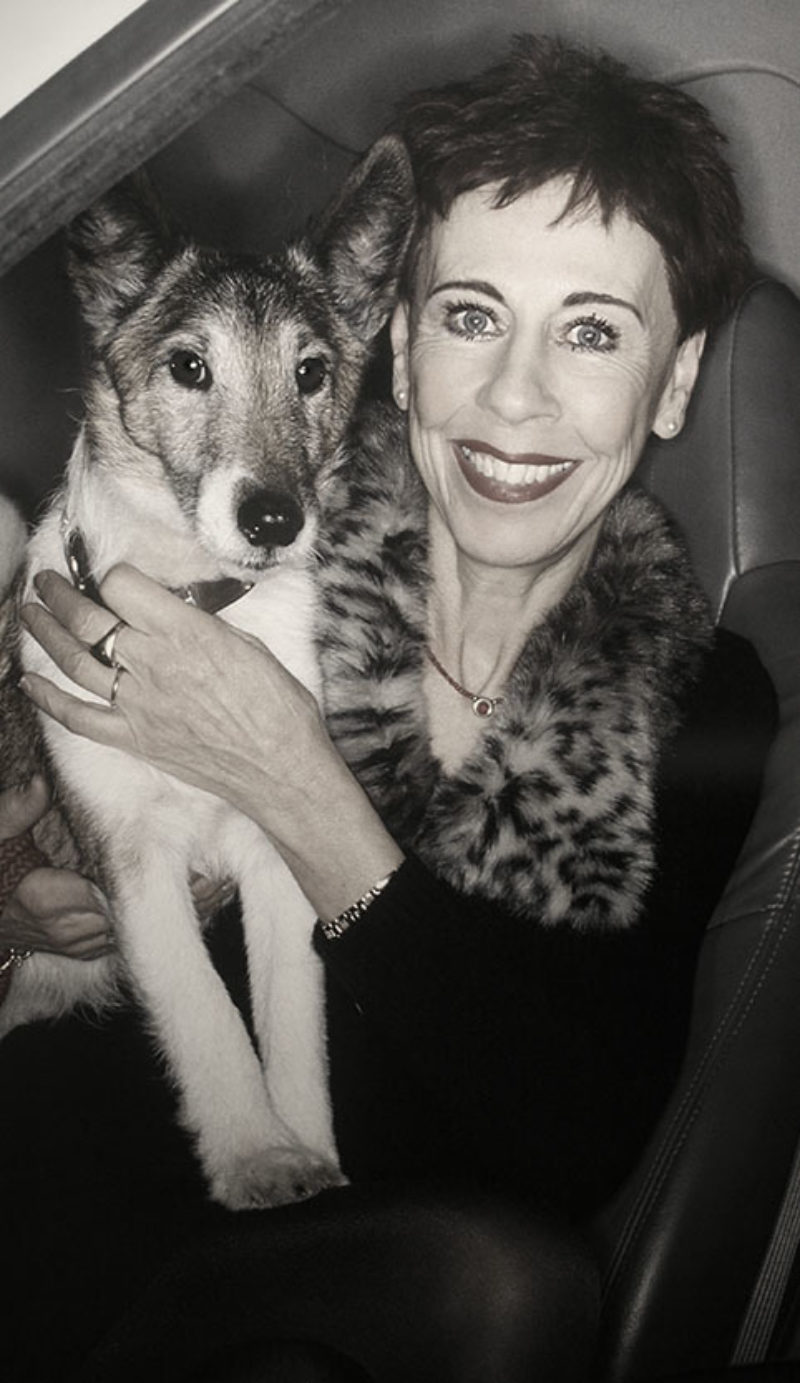 The probability that this magazine could be picked up by random people with a diverse array of hands soothes me. This magazine will be spread randomly, in coffee bars or cultural hotspots in big cities. Or you can pick it up at the local bakery, in bars run by Bulgarian people or at libraries and schools in small towns. The Avant-Guardian circulates via individuals, whose faces and hands are unknown — possible, but to me, as one of the writers, absent readers.

Looking at the KRAAK program of this fall, I’m wondering what absence means, and how it defines form and content? A printed newspaper lacks fast updates and embraces slowness and in-depth content. The Avant-Garde pushes forward, fast, relentlessly creating new forms and ideas — not unlike tweets and social media updates. What if the core identity of a movement is absent in a magazine that proclaims to be The Avant-Guardian?

KRAAK, the publisher of this magazine, is very keen on the Avant-Garde, as it imagines the (non-existing or absent) Other and injects it into daily life and reality. Some people see KRAAK as a wise middleaged entity though. A body that once carried the motto “do not bend”, a strong-spined identity that does not bend. Nowadays the spine has expanded and transformed into a polymorphous body with a lot of organs, although KRAAK stayed and is still dedicated to imagination and beauty. It incorporates happenings, concerts, records, books, articles, tours, a radioprogram, … it is everywhere, but also nowhere.

The disappearal of a core or a well-defined form is absence in favour of diversity, fluidity, paradoxicality and contrast. Although, I wonder, is a moving body’s identity defined by a vast and unchanging core? Or is it rather the absence of form that defines a body?

KRAAK highlights musical practices that reverse the form and content. We embrace open-ended concepts in which music is broken up by performance, psychedelics, conceptual thinking, straightforward poppyness and ignoring tradition or craftsmanship. Playfulness and imagination is the content; the form is a wide spectrum of ever revolving sounds that are undefined and… yes, formless.

The ever great Peter Fengler talks in this issue about his work. He remarks how an opening becomes a performance, how sounds can become sculptures, or how steeple-chasing on LSD can complicate your life so that actions (sports in his case) become art.

Lieven Martens Moana honours his fellow artists in an essay that questions the thriving force of good music. He sees a lot of poetic wisdom in adding elements, influences and ideas to someone’s roots. The idea that artists mimetize (or copy their influences) seems to him as if the artist ignores his roots and local tradition. He doesn’t like the idea that the artist himself disappears, and uses music to achieve this absence.

Fengler and Martens are hinting towards an interesting question: good music is appearing and disappearing in various forms. But, if a hand would adjust continuously its form to its context, would we still call it a hand? If your hand became a tool with tentacles when you put it in water, would you call it still your hand? Given the idea that a person without hands loses a part of his identity, does a person stay the same if his hands continuously change?

It’s very exciting to see how KRAAK, and its organs — concerts, festival, records, tours, performances, The Avant-Guardian, De Neus Van God — are chaotic, ungraspable, dynamic and fluidic. It’s intriguing how the seemingly absence of a (maybe superfluous) well-defined idea and concept (or core, as you want) seems to create a very specific identity.

Absence can be a core to define identity and form. A heart is empty; it’s a pumping, cavernous organ through which the blood is propelled forward into the vains. But if you take out the blood, there is nothing — absence as a thriving force for life.