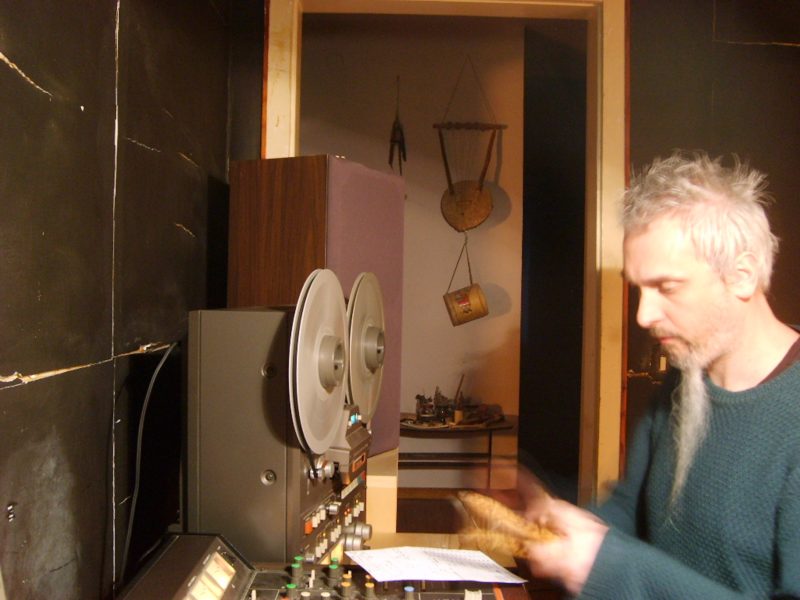 Giancarlo Toniutti is an electro-acoustic composer, anthropologist and visual artist living and working in Italy. Ever since the very early eighties he has been steadily building a completely unique ‘universe of sound’ through detailed tape collage and analogue sound synthesis. Toniutti’s solo work is well revered and for good reason; his 1985 album ‘La Mutazione’ is regarded as a missing link between the dark cosmic electronics of Klaus Schulze and Tangerine Dream and the early noise esthetics of Whitehouse and Nurse With Wound. Next to his solo work he collaborated with kindred spirits like Andrew Chalk and Conrad Schnitzler. For Eastern Daze III Toniutti will do an exclusive quadrophonic performance of his 1986 ambient masterpiece ‘Epigènesi’, a concept album dealing with new forms of languages and - in a way- new types of humanity. Expect to be taken on a trip to far away forgotten cultures that might never even have existed in the first place..
by Cristina Amelia Messer

The Internet has it that Giancarlo Toniutti’s music compositions, especially the first ones, might be a link between Tangerine Dream and Whitehouse / Nurse with Wound. The truth is, he doesn’t give a flying fuck about categories perched on a chronological and fetishised timeline (music genres, currents, western canons etc) or representation of reality. He has always seen himself as a marginal figure, never interested in dealing with what we are coerced to perceive as reality. The only word that can encompass his practice is SOURCE. He has a penchant for cosmogonies, the clash of forms and morphology. A tautological statement at first glance; however, it encompasses three of his main interests: anthropology, sonic reality and word formation (a branch of linguistics).

There is a great deal of theory the listener has to go through in order to grasp Toniutti’s sonic realities. His releases are always accompanied by long explanatory texts, diagrams and images. This might be problematic in the sense that his compositions might not stand and speak by themselves in terms of the chosen medium. But this is not just a quirk. In order to understand a form, one must try to understand how different lines of force pull it together. Research/documentation is central to his practice. No romanticist fancies are allowed in this functional endeavor. Therefore, his sound pieces should be heard as “translations” of different anthropological and linguistic perspectives.

Since the early 80’s his practice has been developed through different methods. One is his 1985 “La Mutazione” (unearthed in 2015 by Oren Ambarchi’s Black Truffle) wherein different coherent sound surfaces overlap. Here the use of electronic devices is evident since it coincides with his electro acoustic apprenticeship. “Epigenesi” represents a switch from electronics as sound source to analogue devices. This results in “layers formed with the contribution of many diverse sub-layers, so that their interaction with the other layers is more of a densifying type, creating specific niches etc. The final form, thus, is originated through the “conflicts” between the continuity points within layers and such “conflicts” mainly depend on the sonic “environment” generated by these process trajectories.”* Collaborating with other musicians could also be seen as method, and here is worth mentioning “Tahta Tarla” with Andrew Chalk and” (source) KO/USK” with Sigmar Fricke.

His sonic realities bare no images, as sound is vibration and therefore abstract. The use of field recording is strictly functional. Toniutti is not emotionally attached to this tool, nor to what is being recorded. This attempted divorce from representation, and therefore his ego, wants to open the gates of objectivity. Where does sound come from and what kind of syntaxes space can generate? The arbitrary element is at the core of these enquiries.

To summarise this for the neophytes, I will leave the man himself speak:

“I consider myself more like a culture within myself, in the sense that I compare myself, and I confront myself, with the cultures of the world, preferably those on the margins: like Siberia or the Arctic, like Chukchi, Nganasan, Yukagir, Ket, Tuva, Eveuk, Koryak, S·uni, Aleut, etc., or also Mongol, Tlingit, etc., those with which I find to have a greater continuity, on the cosmogony plane… I view sound like an acoustic phenomenon and not like a codified language that implicates any hierarchical codes like the taxonomical dependence of instruments, the existence of measuring models, questions of literary supremacy, et cetera. This is part of a culture I don’t share anything with.” (source)

Editorial issue n° 8.1 — Eastern Daze III
We proudly present you the third edition of the Eastern Daze festival, a co-joined effort between Sound in Motion, Vooruit, and ourselves. This edition is again loosely inspired by the common and para…
by Niels Latomme