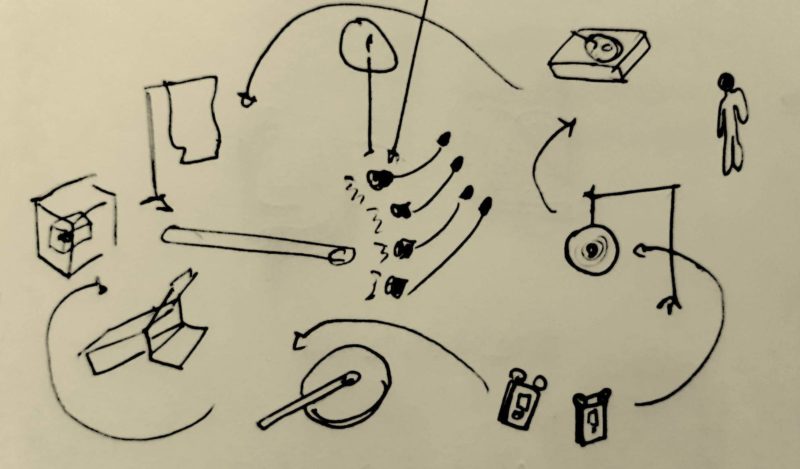 Next week, on October 10, KRAAK will put out a new release. In most cases, this is a rather slow process: we invite somebody to play a concert, we keep in touch, start to ask for more recordings and, eventually, a record comes out of these ongoing conversations and meet ups. This might also explain why KRAAK is such a ‘slow’ label with a somewhat ‘low’ output. Still, we do maintain a highly personal relationship with the artists featured in our catalogue, which also explains why some of them continue releasing their work here. In the case of the cassette by Italian but Berlin-based self-taught composer Giorgio Dursi, it was the other way around. Like many other labels, we get quite a lot of unsolicited demos in our mailbox and hardly have time to go through them all (same old story, I know). But it turns out that the Soundcloud link to this guy’s music got stuck in my browser, and I found myself returning to it a few times a day while hassling with the lump of rather boring things to do here at our HQ. As one thing led to another, we’ve now reached the point where we can celebrate a new release! Since I didn’t know the man behind this music in person, I thought a short write-up at the AG was the best way to remedy this. I sent him a few thoughts and related questions I’ve been elaborating on personally lately.
by Pauwel De Buck

When listening to your demo, I immediately felt a very personal - even emotional - and radical approach in your musical process, almost therapeutic, with a high sense of outsider attitude. How did you come to create this kind of music? What’s your background in music or arts?

I started making music relatively late in my life. Even though I took violin lessons as a small kid and (badly) played guitar as a teenager, I eventually ended up abandoning music making for several years. Then a few years ago I attended university classes on musicology, but it was all about history, aesthetic philosophy and interpretation of classical and avant-garde music. A lot of words on music, basically. Then in the spring of 2015, I bought a cheap microphone, an audio interface, installed a DAW and started to record the sound of objects in my apartment and my own voice.

Can you think of a few key elements your musical practice is based on?

A general vision of the final output is essential. It all starts with a seed idea: a very rough, almost vague perception of something that I have to nurture and develop. It requires time. Then micro improvisations come in and they trigger new paths within the general vision. It is like biological forms. This seed idea is like the DNA code, in which virtually all future events are predicted but then, along the way, a lot of circumstances and accidents happen which change the final shape.

There is also a lot of listening back. I can spend hours or days listening to some recorded part. I have to metabolise it and imagine how it can evolve. While listening I want to see how this biological form reacts with some extraneous entity. So I put a new improvisation inside, like injecting some bacteria, and maybe something unexpected comes out.

Improvisations are the atomic parts of the assemblage. Not having any technical skills in playing any particular music instrument, my main ‘instrument’ is improvising with whatever I find at hand: it might it be my voice, found objects, toys or classical instruments, analog electronics or digital instruments, recording and mixing techniques and so on. This total lack of any particular technical skill may get frustrating, but most of the time it’s very liberating.

However, what I use the most is my own voice. Voice is great, it’s the more ductile tool and can create a plethora of crazy sounds and timbres. It can be deadly serious one moment and the second after ridiculously comical. And it naturally follows the flow of my thoughts. Sometimes I use it as an imaginary drawing tool. A certain amount of humour (sometimes black) also plays an essential part in the process.

Do you think your music relates to your own personality? How do you relate to your own musical practice?

I have mixed thoughts here. In music, for example, there are people concerned with the study of the pure physicality of sounds which is a rather ‘scientific’ approach, where personality is banned (for example Hermann von Helmholtz, who was indeed a scientist or researcher back in the days at IRCAM). My case is quite the opposite. I use and manipulate language and sound at my arbitrary and often incoherent will. I’m not part of a scientific community where I offer shared solutions to shared problems with a shared unambiguous language. I do whatever I want the way I want to with a language that I constantly reinvent. So my reply to your answer  would be yes, my personality is very important to my practice.

But then it gets more nuanced. Because in my case is not about egotism, about talking of and about myself. It might seem so because I use my own voice, so it seems very related to my personal life. But it’s the opposite. It's more about the search for archetypes. I'm like a tragic (mostly tragicomic) actor who wears those mythological masks and has to dig deep into human nature to make those masks alive.

In Side B of Intestinocephalo I recite/sing  ‘Elucubrazioni di informazioni memorizzate... memorizzazioni di informazioni elucubrate…’ which loosely translates into ‘over-elaboration of memorized information… memorization of over-elaborated information…’ This continuous over-elaboration of information is something we find normal in a computer but in a human being it becomes excessive, tragic and, at the same time, comical. Surely it was a state of mind that I was deeply feeling at the moment, but it’s not properly mine: it’s an archetype. I like to think about it as a postmodern Melancholia I from Albrecht Dürer (I’m sorry, Albrecht.) 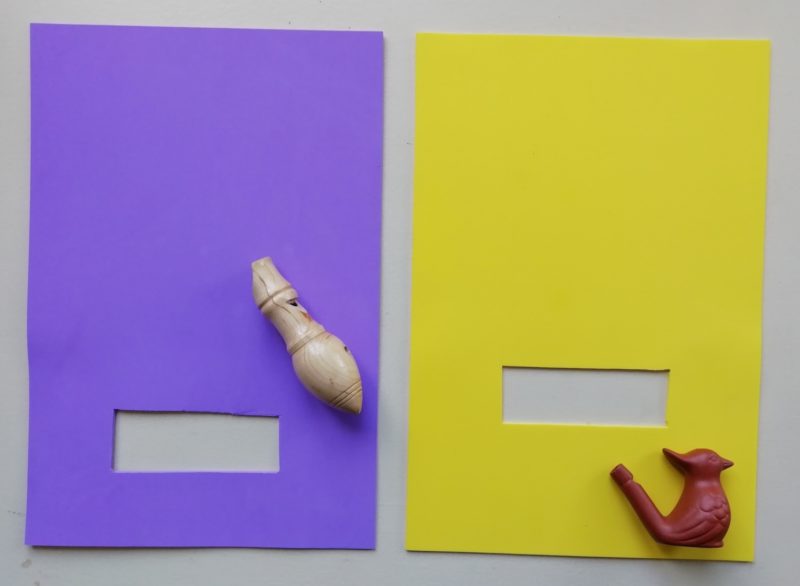 As stated earlier, here at KRAAK we’re not used to working with demo material. The releases we put out are mostly a result of a long and personal process prior to it. I wonder how you, as an artist, relate to this kind of attitude from a label. Do you often send out demos to labels you don’t have a direct connection with?

Not so often, since this is only my third release so far. But it’s possible that I will do it again in the future, so be prepared! When I started recording in 2015 I didn't know anybody involved in music production, so I sent the material to some labels that I found interesting. I didn't even know all this tape scene existed. I’m actually an outsider in that way. Elia of Das Andere Selbst was so kind to want to publish my first material, then one year later he got me in touch with Artetetra. And now here I am.

If you do, how do you decide which label you want to approach?

If they have published or collaborated with artists that I like and/or feel ideally related with. Also the (possibly wrong) assumption that the label may appreciate what I propose.

Do you think it’s necessary to know the people behind the label before sending music to them?

Absolutely not, the same way one doesn't have to personally know an artist in order to appreciate their work. I understand how it may be useful on a practical level though. 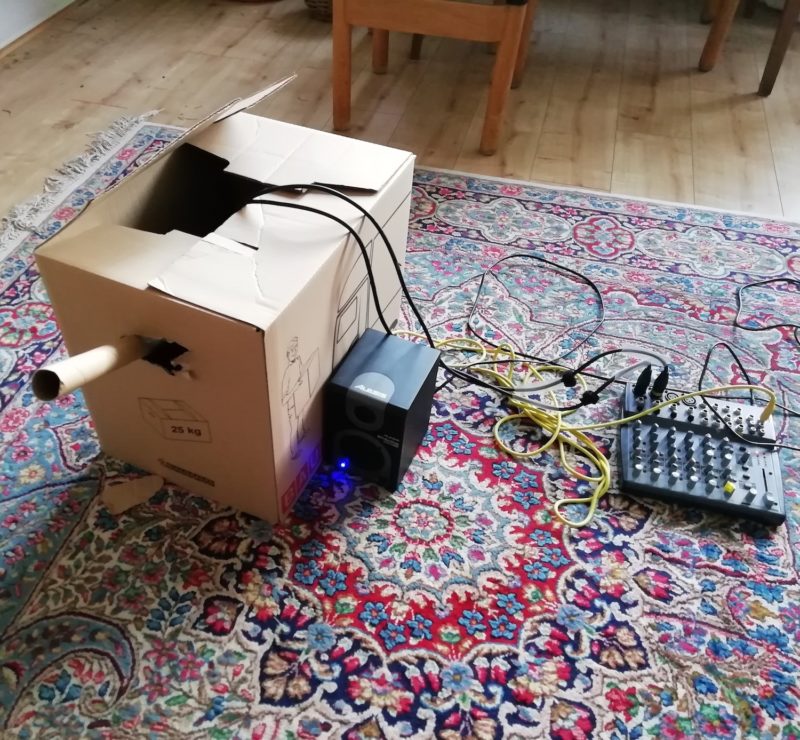 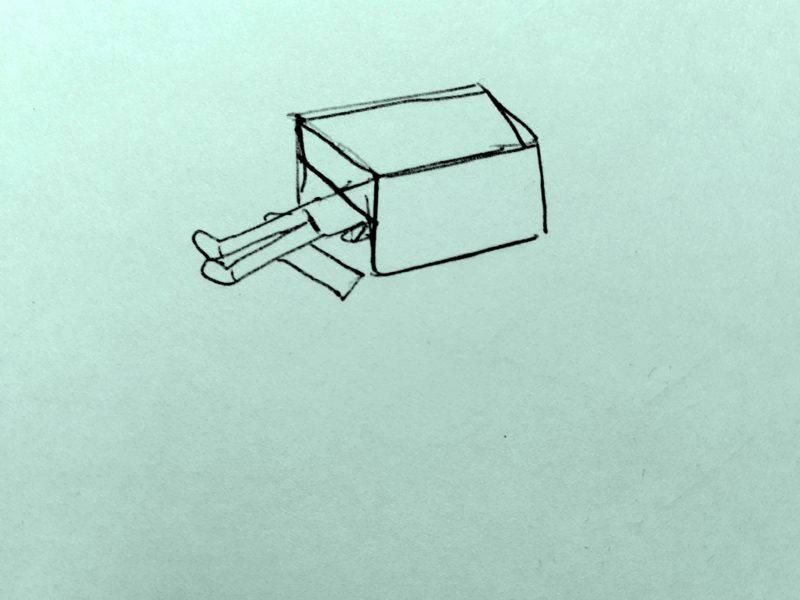 People still intend to renew musical conventions, but the further we develop our musical landscape, the more difficult it gets to speak of a ‘new’ approach, as most of the ‘experiments’ have been done by now. It’s something which strikes me often when reading ‘new’ music magazines. I’m not sure if I still believe in it. What do you think of that? Are you concerned by innovation and rethinking the existing world? Do you think it’s necessary to act towards it?

This is a very interesting and complex question. I’ll try to reply but it might not be my definitive take on this topic. And I apologize in advance if my discourse is fuzzy and incoherent.

I don’t mean to be an anti-technology person. I truly believe in the power of technology to innovate and improve people’s quality of life, but that’s a totally different context.

Often ‘innovation’ in art means looking back to the beginning of art (or its supposed beginnings) rather than embracing a new shiny tool. That’s why if we look at the history of technology we see a straight line going into one direction, which is still unpredictable.  If we look at the history of art, we see recurring patterns and a constant move away from and back to the center/beginning.

Does the term ‘new’ or ‘avant-garde’ music count for your own practice?

As I said before, I’m not concerned with the term avant-garde which implies the existence of a ‘retro-garde’ or a ‘middle-garde’: something to oppose or surpass. I don’t think in terms of opposition to something or someone.

I prefer the concept of ‘individuality’ or ‘originality’. I see human beings in terms of biology: every human being is a unique biological experiment in itself and art is where this complex organism, capable of both basic vital impulses and high speculation, can be transfigured and can be communicated to other human beings. So it’s important to nurture originality in its own peculiar way. And so we come back to the concept of ‘personality’ that you mentioned before. Also I’m getting too mystical now, and it’s better to stop and eat a sandwich.

Ok! I’ll let you eat. But one more thing, do think there’s any danger or downside to the ‘innovative’ approach?

Desperately starving until you cut off your left ear, you mean?

Get the tape at our Bandcamp!