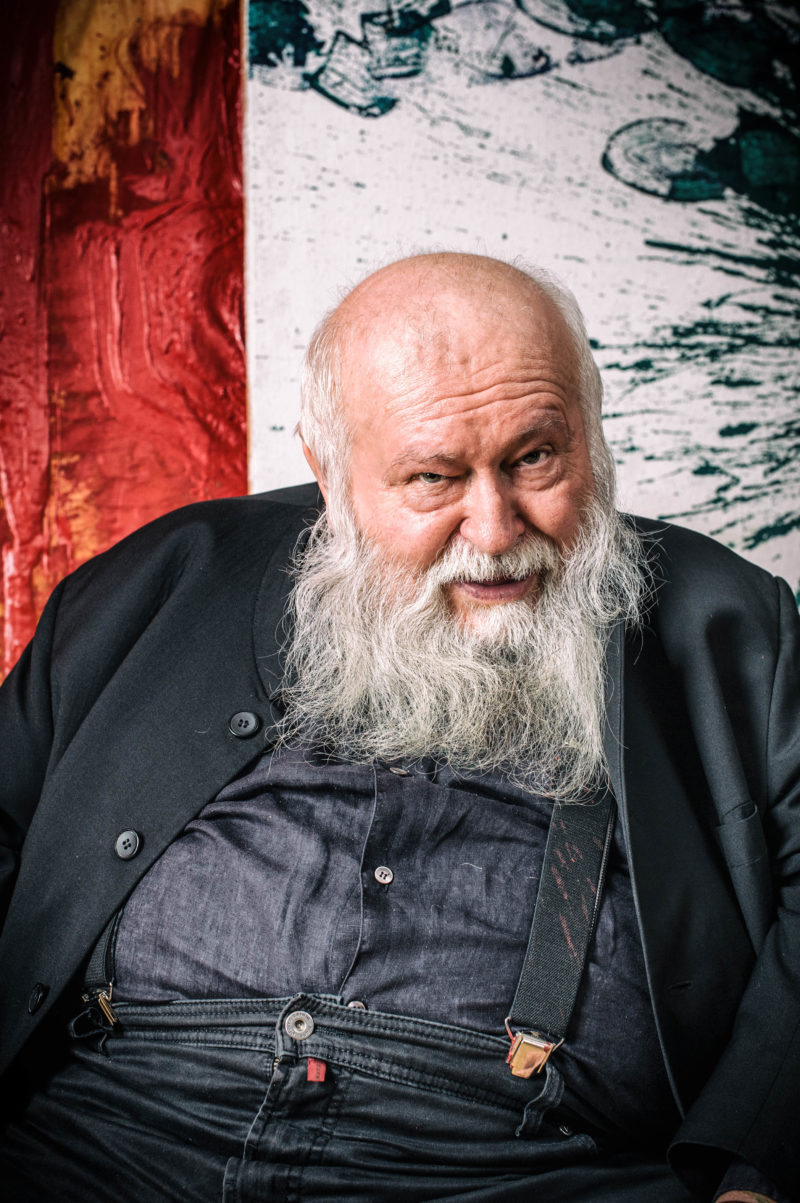 Nitsch received his formal artistic instruction as a painter at Wiener Graphische Lehr- und Versuchsanstalt in Austria. His large-scale canvases are drenched and splattered in reds, browns, and grays. They look as if he pulverized a large mammal in a giant blender and tossed the outcome haphazardly onto a wall. A closer examination reveals that great care and meticulous palette selection went into the finished pieces. He is frequently cited as a Vienna Actionist—a loosely affiliated group of off-kilter and confrontational Austrian artists that also includes Günter Brus, Otto Muehl, and Rudolf Schwarzkogler—but Nitsch long ago transcended any identifiable “movement” and began honing a gory craft that is solely his own.

Of course, Nitsch’s work pisses off all sorts of religious and conservative folks, but they are completely missing the point. He is only holding up a mirror to his detractors’ own hang-ups with religion and the weird, antiquated ceremonies inherent to their beliefs. And besides, anyone who thinks that a fictitious six-day festival of naked people, mass intoxication, and stomping on animal intestines inside an ancient castle doesn’t sound like a good time is so boring that they might as well not exist. Still, lots of questions are raised by Nitsch’s work regardless of one’s faith. So we meekly asked for some answers after presenting him with a sacrificial offering of three eviscerated lambs and a big jug of mead.

“the essentially new dimension of my theatre is the overcoming of role-play by staging real happenings. real happenings automatically call for the gesamtkunstwerk. they are to be experienced tangibly through all five senses. they can be tasted, smelt, they are to be heard, to be seen and to be touched. besides the visual dominance of my theatre, which strives to uncouple itself from language, NOISE is a key factor. noise takes over for the moment the role of music in my gesamtkunstwerk. my music has its roots in crying out, in clamor, it is tied to the most extreme excitation, which is a necessity of theatre. in terms of human history, the scream precedes the word, it occurs whenever excitation is so intense that the word is not enough. my music is in no way illustrative or imposed on the actions. it comes literally from the excitation generated by what’s happening and its commotion. it intensifies the action, the action activates the music. it digs deeper into the abysses of the drama’s catastrophe. subsequently my acoustic composition has moved beyond the extreme archaic possibilities of expression, which i would nevertheless leave entirely. the acoustic color has become increasingly crucial. a kind of organ sound emanating from the whole orchestra is being sought. i came across the music of the o.m. theatre directly through my immersion in the action.

before my efforts there was the music of the second viennese school, schönberg, webern, for whom i have so much respect that i did not want to simply rehash them. an eruption out of them had to be found. something newly born arose out of the action. chance acquired an important role. john cage contributed to this opening. on the other hand, very different sound dimensions were needed for the length of a 6-day play. enormous blocks and walls of sound were employed. the orchestration tends towards the gigantic. almost a turn back to wagner, bruckner and scriabin emerges. an orgiastic music is to transpose us to an intensive state wherein we find being. the o.m. theatre is comparable to a giant symphony with six movements. the sensory intensive impressions brought about the orgiastic disembowelment actions of the o.m. theatre, the experience of blood, flesh and intenstines, seen, smelt and tasted, is to escalate into roaring, belling sounds.

just as intrinsic to my music is the meditative calm of the adagio. the tranquility of the starry sky, the serene orbits of the heavenly bodies are to be savored and the universe losing itself in the infinite is to be sounded out. the music of this gesamtkunstwerk is the life-affirming mysticism of being.”