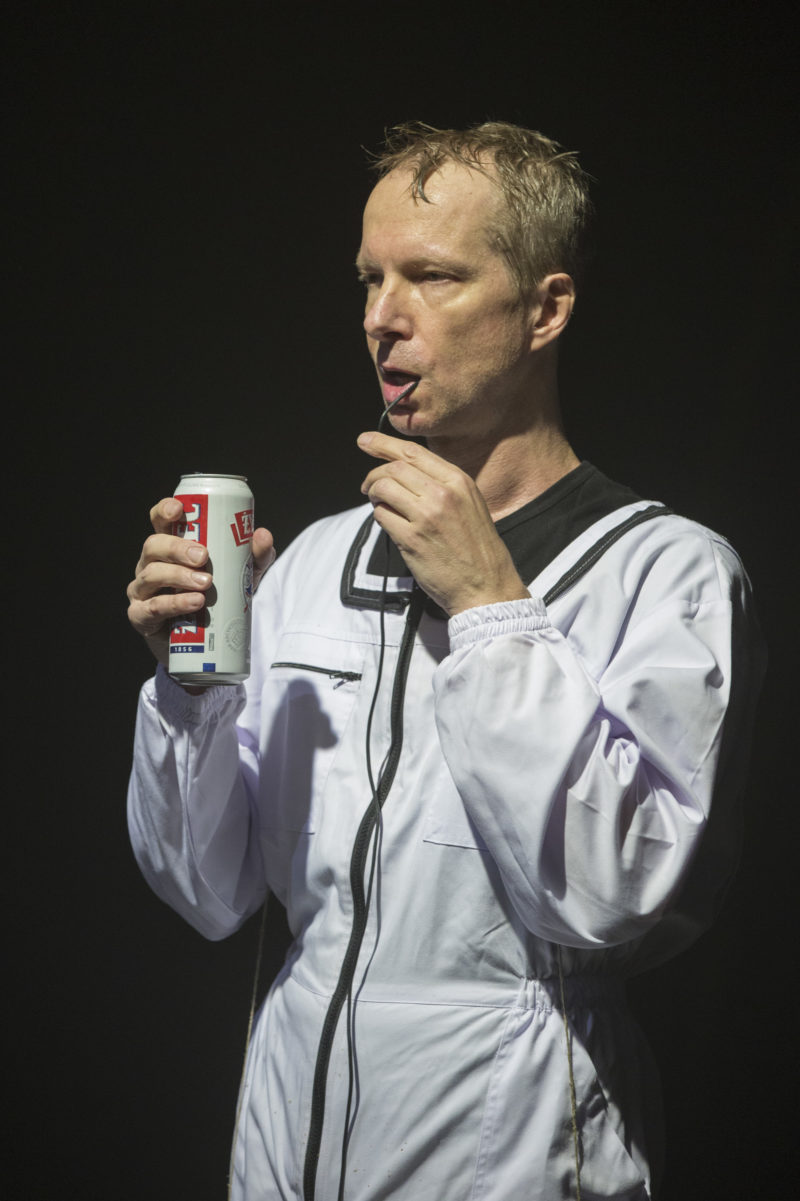 Bergmark is a Fylkingen affiliated sound artist, instrument builder and piano technician. His performances have been described as surrealist puppet theatre, in which the characters are amplified objects such as old tools, kitchen utensils, toys, springs and decorative kitsch. Using contact microphones, Bergmark reveals their hidden acoustics, dynamic scales and unique timbres. Bergmark is the ultimate rethinker of what music can be, in sound and in performance, as you find him sometimes hanging on 2 piano strings from a ceiling.
by Marijke Loozen

Memories are strange things… In preparation of this I suddenly had a flashback to a set you played together with Tippi Tillvind at the Colour Out of Space festival in 2011. It was a purely visual memory, a sort of reconstruction of the shapes, colours and composition of objects placed on your table. A few months ago I saw you perform again, hanging from the ceiling of the Salisbenny theatre in Brighton on two pianostrings.

How do other fields like performance, visual arts, poetry or maybe even politics usually merge with the music you make?

That’s been, in different forms, a permanently returning question. I have never really believed to be anything like a professional musician, composer, artist or anything else really. If I’ve said so, I lie (or at least simplify) out of conveniance or survival reasons: to comply with funding institutions and their need to compartmentalize. I fundamentally disbelieve professionalization of creativity. Money issues are about survival in this wicked world of wage slavery economy but creativity, invention, inspiration, the poetic power of imagination, can never be counted in economical terms. So people usually mistake me for a musician, and also often as a performance artist, composer, visual artist etc. I tried to call myself a puppet play maker once, but I’ve also in periods or occasionally been a butoh dancer, an actor, a jester, an organizer, technician, essayist, critic, piano technician etc. Not politician fortunately. I would perhaps prefer to be called a poet, but I would never call myself that either. I just try to live a life that is as inspired as possible, and I think all are equal in their basic needs and potentials.

The relationship to politics is a different thing: sometimes certain political issues have been the theme for title, a text-sound composition, and it’s an expression of feelings, satire or implicit critique, but I’m skeptical of art as a means for political change. If that happens, fine, but it should never be the slave of a political agenda. Most of all, I believe inspired, passionate art can be contagious, and that potential is partly political if it results in people becoming inspired to take liberties, to invent, to create. I believe in the power of DIY and low-budget, trash solutions. I believe in sharing knowledge and of collaborating. The competition of the personality market, careerism, professionalism, is the enemy of this.

‘Platform for amplified objects’ is the name of one of your self-built instruments, ‘Surreal Musical Object Theatre’ the title of a performance… In a way I have the feeling they could also pass for shortest ever possible description of your work.

Can you tell us when or how this journey in inventing musical instruments and making free improvised music started?

Forgive me if I correct you on a small but important detail: “SurrealIST Musical Object Theatre”. I detest the word “surreal” which usually has nothing to do with surrealism but rather has become the adjective for anything strange, weird, overwhelming or even scaring. And, to continue with the question – yes, they both started with surrealism for me, which is probably an extremely unusual path to go – but as I suggested before, I never wanted to confine myself to having “become” something, I will continue becoming and evolving, and try everything that sparks my curiosity (even old works). That makes me less interested in specializing or getting stuck with trying to be a virtuoso on a single instrument.

Back in 1985, at the age of 22, surrealism became the solution for an impossible conflict (for me) between my political interest and my musical interest – I wanted to have both as parts of the same human drive or philosophy, and only surrealism could solve that for me. I was one of the founding members of the Surrealist Group in Stockholm the next year, and started travelling the world to meet all active surrealists – especially the ones also active in music. In 1987, I met Hal Rammel in Chicago, which was crucial for me. His music and instrument inventions inspired me enormously and changed my life completely. (He also taught me how to play the saw.) I also went down to Alabama to meet Davey Williams, LaDonna Smith and their group of inspired friends.

I soon began to invent and build my own instruments, deeply inspired by Hal, and to start improvising with an attitude radically different from the one that the free improv movement in sweden had at the time. I reached out to them, and they slowly and reluctantly had to accept my existance, but I’m sure with a lot of suspicion. They were strongly professionalist and despised amateurs, although they encouraged a lot of people to start playing improv so that the scene after some years became too big for being included in one single festival, as the case had been not long before. I always, and still feel, like the freak in their world view. I could never play an Albert Ayler song with them. But perhaps I’m the only sane person!

To go back, my “ideological” decision to only play free improv was a step based on the passionate surrealist theory of “pure psychic automatism” and inspired by the AACM and others in the black free jazz movement, especially Cecil Taylor. I was mostly a pianist back then and left Chick Corea behind. Over the following years, I gradually realized that there is far from an equals sign between automatism and improvisation; they might be overlapping sometimes, or rather occur simultaneously, but that’s it.

Another thing I gradually realized is how much concepts like instrument, tool, composition, improvisation, musician, game, play, can float into each other and that we’re basically talking about an activity and not about objects.

You have quite an impressive discography going back to 1983. Which of the releases is your own favorite and why?

Impressive? Still, I feel that my favorite projects still didn’t find anyone that wants to release them: duos with Hal Rammel, with Gino Robair, with Guido Hübner and a second one by the trio Fågelpingis. All recorded, but I’m fed up with chasing record labels. Any volonteers are welcome to contact me!

But I would reply: one that is not yet done. I’ve been commissioned for a solo cd on Fylkingen Records since around 2000, but I still didn’t manage to put it together. I have a problem with editing recordings, it’s too boring to me. I’d rather play, and most of all construct things. I guess I’m similar to Michel Waiswitz in that respect.

If I would choose an existing one it’s perhaps my duo with Martin Klapper, “58 Tracks From A Common Orbit” on musica genera. We’ve collaborated since many years, often in trio with Adam Bohman, and these two wonderful people always inspire me.

In which way has getting to know Fylkingen and being part of it influenced your own creations throughout the years? I can imagine it has literally been a ‘platform to amplify things’… & how about its effect as a community?

You’re right, it has had a big importance for me. The long history and it’s wide scope of experimental music, intermedia art, performance art etc – often in close relation to the EMS Electronic Music Studio – has inspired me a lot. I could say like Ilmar Laaban, the surrealist sound poet, that they have been my “two homes” in many periods. I’ve arranged concerts for myself and collaborators and have seen so many important musicians and artists there. I know the importance is very different for other members or visitors, but for me, I’d like to regard it as a proto-ideal utopia for community creativity and inspiration, for sharing and learning about everything. There is an organic relationship between all parts of an arrangement: from deciding about economic levels, PR, decorating the venue, setting lights and installing sound technology, meeting the audience and colleagues in performance as well as in discussions around the bar, taking care of overnight guests, cleaning the floor etc. Every member can do basically anything they want and they often need and help each other for artistic as well as practical exchange around the events. It’s been a great school.

But such places are always needing, many members use it only for their own career and refuse to lift a finger for any other colleague – it’s easy to get burnt out after a couple of years of enthusiasm. I’ve been the chairperson twice and often worked in boards and committees in other roles. For the moment, I’ve retired from those duties and am again just a “simple member”, admiring the energy of the younger ones that take over. 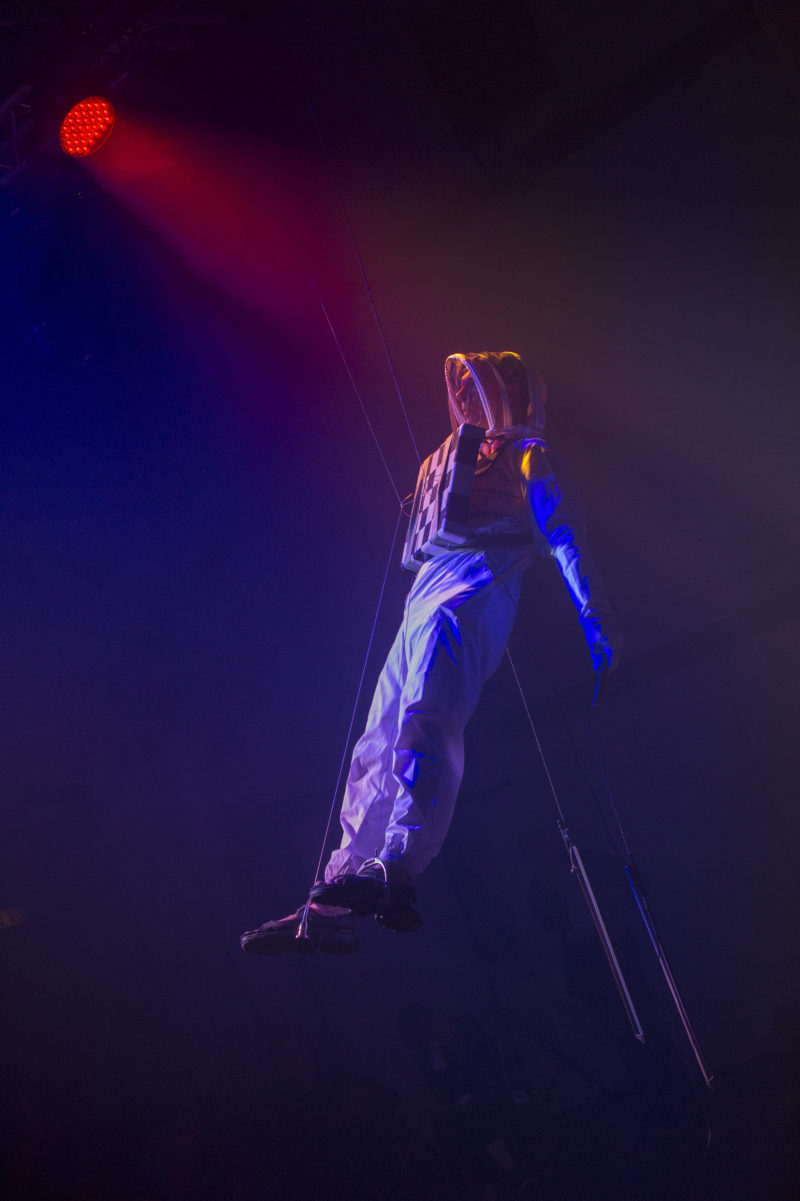 From an early age you were very interested in new, unknown music (things you’d never heard before) and especially the structure of it. On the other hand there was a severe interest and engagement in politics also. Where, when or how did these 2 come together?

I think I already managed to talk about that in my earlier response! The surrealist quest for love, poetry and freedom became my leading star around 1985.

I might add that I’ve changed my attitude quite a bit to the question of “structure” in music. I think the surrealist Paul Nougé and the music sociologist Christopher Small put them in the right perspective: as mirroring other human structures, among them social, ideological, economical etc. The musical drama is played out inside the listener and the feelings aroused correspond to the hopes, illusions and pretentions they have – not only as individuals but in the setting that is the confusing, complicated network of the musical ritual.

How important is humor in your work?

It’s not an eternal principle, but certainly one of the things I care for under the banner of the poetic phenomenon. I’d like to think that I’ve found out that it suits my personality better to be the straight-faced musician (like Sven-Åke Johansson) that allows himself any “weird” action instead of being a jester with a silly or crazy face (I’ve tried this in periods! Other people that I admire very much are very good at this, though, like my friend, the largely unknown comic avantgarde stage artist Tomas Halling).

Which contemporary musicians / performers are an inspiration for you in the process of personal creation?

If I don’t stop I would surely add 100 more people.