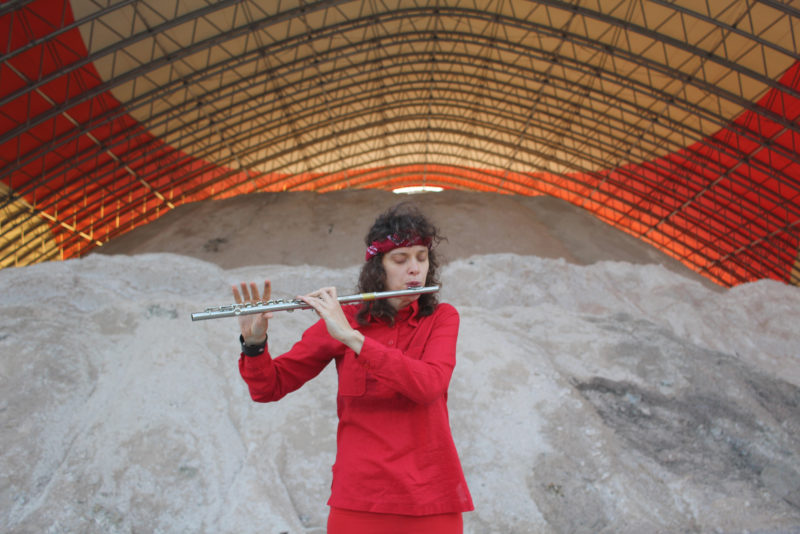 Ka Baird is one of the founding members of the long-running avant-psych project Spires That in the Sunset Rise, a band the late Jack Rose described as “female Sun City Girls”. Currently Spires consists of the duo Ka Baird and Taralie Peterson. A few years ago Ka relocated to NYC and set off in numerous directions other than Spires. Her current solo work, which she will present at the KRAAK festival, ventures in piano improvisation, extended vocal techniques, physical movement and electronic manipulation of the flute.
by Hans van der Linden

Which artists influenced you as a musician?

I am influenced by so much. One inspiration that comes to mind for Sapropelic Pycnic was the reissue put out by Editions Mego called Sacred Flute Music from New Guinea: Madang/ Windim Mabu originally recorded in April-August of 1976. These sacred flutes, made mostly from bamboo, expressed the cries of the spirits, and the breathy, primal quality of it as well as the singing through these tubes, was hugely inspiring. Another flute record that had an impact was Phil Niblock’s Four Full Flutes, which incorporates drones with adjacent tones colliding into eachother with a whole array of harmonics hovering above, that world that Phil Niblock does so well.

It feels like the flute has become an extension of my voice. I love working with breath so much.

Spires definitely still exists! We are shifting more and more towards improvisation. We have made so many recordings in the last couple of years, some in our own spaces and one in a church in my hometown where we used the piano. We use piano, saxophone, flute, hand percussion and of course our voices. We are hoping to release some of that material in 2018.

Although it has been liberating in many ways to develop my solo project, collaboration still remains extremely important to me and especially with Taralie whom I have been writing music with since I was 16.

In what way did your move to New York have an impact?

Both in Chicago and Madison I had played/performed solo. It just was heavily deprioritized to Spires. So moving to NYC and away from Taralie was a big shift artistically. It now became the priority and was my chance to essentially make all the decisions after years of collaboration.

Moving to NYC was also an ultimate step in reaching my state of bliss. At 38, I was ready and willing to make the next step in dying for my art form, that is to say I was done making compromises and harbored no illusions anymore about who I should be or what I should do. I was ready to be what I am: an artist. I was done looking for anything else. And although it has taken some time, NYC has responded loud and clear that this is where I belong. I love this city. So many artists of all gender identities, colors and ages to collaborate with and be inspired by. I thank the universe that all the stars were aligned for this to happen.

In which way does your solo work differ from the approach pursued with Spires That in the Sunset Rise?

I think one thing in particular I wanted to explore further was the performance aspect. In the last few years with Spires my live performances have become more and more physical, sometimes creating some inconsistencies in the Spires set that would not always please bandmates. Going solo, I was granted free license to explore this spontaneity and create the sounds I needed to lose myself in. For instance, with my solo set I like to create one long thought with seamless transitions, crafting one long breath of thought as opposed to the choppiness and awkwardness of breaking between songs. I do not want anyone, including myself, to lose focus. So I create this river and I lure you into staying with it. Add to that my attraction to trance music, the idea of simple structures that build and change over time with rhythms that allow movement and physical catharsis; I essentially seek to shut up my internal dialogue and hope that my instant and direct involvement will prove infectious. I want everyone to be completely present.

Sapropelic Pycnic seems to be a recurring title. It has been used both for the recent album and as your recording name on previous ones. If an overall concept, what does it express?

The name comes from sapropel which is a contraction of the Greek words sapros and pelos meaning putrification and mud. Sapropel is the dark nutrient rich sludge at the bottoms of rivers and oceans. Pycnic is a science term meaning “relating to or denoting a stocky physique with a rounded body and head, thickset trunk, and a tendency to be fat.” The word play refers to engulf or gorge oneself on this dark sludge, this unseen substance in the mysterious depths of the oceans that has so much vitality and power. A metaphor for the subconscious.

The album has an energy flow. It flows from the material to the immaterial to the spirit to the unconscious to the physical to the emotional. To be more specific, it starts from the earthly plane with Tok Tru and then eventually dips beneath the surface during Transmigration into another body of reality beyond the physically tangible. This proceeds into Metamorphoses which is a push and pull between the material and the spiritual planes, the reality of day to day life slowing down and speeding up, an homage to balance and the absurdity of life. Oneiric comes from land of dreams and the shadow side, with an earthy, primal quality to it followed by the physical release of Ka, a total explosion and complete erasure of mind and thought through physical catharsis and movement. And finally the last track, the melodic You Are Myself provides the emotional catharsis and release, a sense of closure.

You did mention that your performances have become more physical...

At the beginning of Spires I would get extremely nervous for performances. Around the time that Spires started to compose and perform Mirror Cave I became naturally more and more attuned to my body on stage and found that in order for me to “sober and quiet the mind, thus making it susceptible to divine influences” I had to become very physically engaged with the music. I felt like I had to match my mental energy in a physical sense in order to overcome it. So more and more my performances became close to a possession, with the main criteria being to create a sound that could shut up my internal dialogue.

Editorial issue n° 11
Dear reader, Recently I stumbled upon an interesting article, published in the mid-60s. Reading old essays about art is something of a habit of mine. It helps filtering out the noise that is inherent…
by Niels Latomme
Best records of 2017
De Neus Van God handpicked a fine selection of records and concerts that impressed them during the year 2017. In a random order.
by The Avant-Guardian HQ's