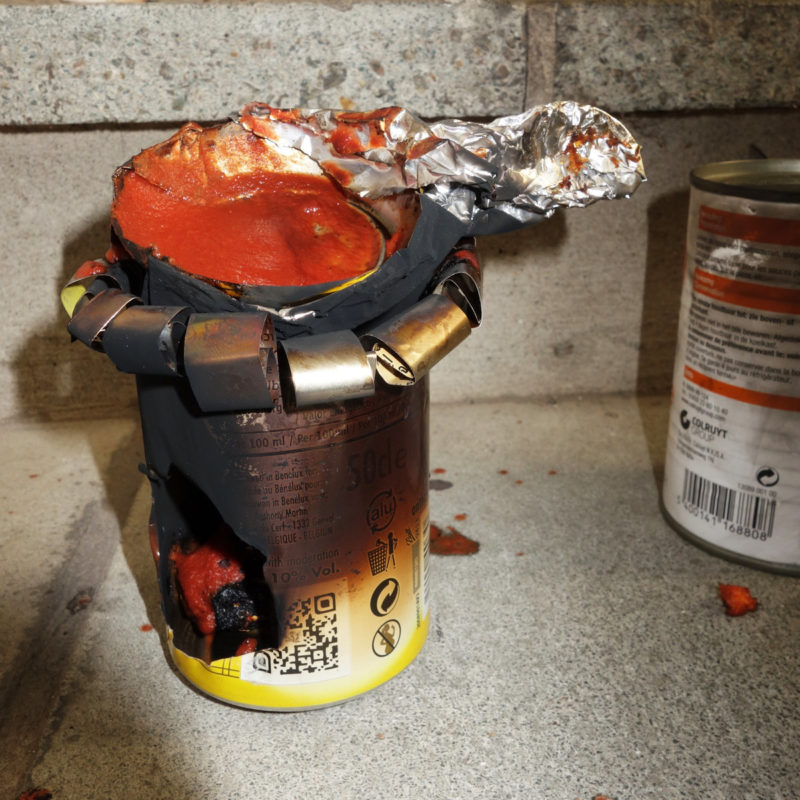 is born in the bedlam of the highly dynamic underground of Brussel. A (so-called) crap wave explosion that impersonates the best of no wave and dada performance — although they are too unique to reduce them to one or two art movements. Lemones practice the absurd as a highly form of art, rock ’n’ roll becomes a readymade in which self build instruments, chaotic songs and brutal energy are channeled towards a next level; be not mistaken, there is serious poetry in play!
by Niels Latomme

Rock music comes in different forms and outfits. Since its existence in the late 50s, rock wanders along a fragmented and bumpy path of movements and counter-movements. It follows parallel roads, exploring new terrains or chasing its own tail. Each evolution either proclaims to (1) invent new forms, authentic and original; or (2) declares itself dead, and finds refuge in the inauthentic, the uninspired and the nihilist; a (3) third, but no less interesting variation is the one blending old and new forms. Rock ‘n’ roll is a continuous back and forth play of old and new ideas. The actors are mostly born out of local scenes, taking inspiration from previous styles or forms, or from other arts. They are sometimes informed by their locality, molding the local and the personal into a universal appealing form. In contrast, other rock bands assimilate American culture to transcend their European, Asian or African roots.

The Brussels-based power trio Lemones could be seen as a perfect case study of what rock ‘n’ roll has become in postmillennial times. In this essay I’d like to follow some thoughts about rock music and its current state; I argue that complex mechanisms can be used to deliver (a) simple and direct messages. I’d like to point out that this essay is a thought experiment on my behalf, more than it claims to unvail a well-defined truth, neither it claims to express the artistic vision of the artists.

Lemones are Maarten Raskin, Steven Bertels and Paul Boudeau. The band sounds unpolished, brutal and trashy. To this end they developed self-built, lemon-shaped instruments. In 2016 they debuted with 'Parasites by the thrashboard side'- a 7” single on the label Swallowing Helmets  that Maarten and Steven run – under the same name they also organise  one-day exhibitions and concerts in their studio in Molenbeek.

Since their existence, Lemones played a series of concerts that are critically acclaimed for their highly energetic character, standing out in its absurdist performance quality, but also as equally pure rock ‘n’ roll in its most brutal and inspiring form.

A crucial part of the Rock ‘n’ Roll ritual is choosing a name. For Lemones the name could be seen as a warped take on the great rock tradition of ‘the-bands’. In the past we had ‘The Rolling Stones’, ‘The Wipers’ or ‘The The’. In 80s underground music this tradition gave birth to ‘The Screamers’, ‘The Dead C’,  ‘The Mentally Ill’, ‘The Frogs’, ‘The Cramps’, ‘The Germs’ and ‘The Flesh Eaters’. In this lineage, ‘The Lemones’ would have been an obvious choice.

The band and its name are actually born out of a complex interplay of associative thinking, wordplay and elaborated work. On a certain point in recent history, the wordplay ‘Lemones’ got stuck into Raskin’s head. An old guitar with a broken neck was converted into a lemon-shaped instrument, originally conceived as a more conventional version with a neck, but soon reduced to its bare minimum. Together they rethought the fundaments of rock instrumentation, using the lemon shape as means to realize a stripped down, poor sound. They built a similar metalic bass and a lemon shaped open drumkit without cymbals, only containing the bare minimum — Bobbie of Guttersnipe even thought it looked like a pregnant lady. The lemon and its specific form becomes as such the mold to lift limitation to an absurd, but equally poetic level.

This limitation is crucial for their music, as it enhances a new interplay in between structure and chaos. A song and its structure are born out of collective improvisation. Due to the ‘poor’ qualities of the instruments, it is impossible to play a song exactly the same. This creates an open space where songs can be extended, deconstructed, changed, built up, without losing the power.

It’s tempting to reduce rock ‘n’ roll and Lemones to a couple of taglines; or relate them to historical movements (if you like to read about music and art history). Or you can apply descriptive strategies to give rock ‘n’ roll a righteous place in the history of arts, analyzing the aesthetics and the socio-political content. In this part, I’ll use these three approaches to frame Lemones, to argue that those are partly insufficient to describe what is actually at play in this band.

Lemones are the next revelation in the infamous Brussels crap wave movement.

Lemones are born in the long history of Dada and Fluxus inspired art rock, their sound and approach are not unlike No Wave music.

It’s easy to describe this band as part of these traditions. On the first level there is the deliberate use of self-built, ‘crappy’ instruments that could refer to the Dada costumes or the Futurist Noise-Intoners of Russolo. Both sound-wise as context-wise Lemones are related to No Wave music. Their brutal stripped down rock ‘n’ roll primitivism sounds a lot like the detuned, short outbursts of deconstructed rock music by DNA, Teenage Jesus and The Jerks, Vertical Slit, Drunk with Guns, Axemen, Black Humor, Killslug and Demo-Moe. The nihilist and deconstructed approach of those bands was clearly informed by conceptualist approaches, borrowed from visual art.

The content-based and aesthetic analysis:

Lemones inject ironical, absurdist and trans-medial strategies into the standard rock outfit to establish a highly conceptual performance body, that acts as context to express pure, primitive emotions. This framework is built out of different layers, which I will explore briefly in the following parts.

The first layer is the use of trans-medial strategies. The self-built instruments easily could be exposed as autonomous objects within a visual arts context.

The second layer: one could point out the big chunks of irony and absurdism in their work. The band name is the most obvious example (and the name of their single, which refers to one of the great hits in rock ‘n’ roll machismo). As pointed out in the second paragraph, the band could be seen as a parody (and for that part, criticism) on rock ‘n’ roll clichés. Musicologists analyzed rock ‘n’ roll as male dominated, white and middle class as it tends to express overt sexism, and use phallus-like symbolism.  In this musicologist approach, Lemones’ removal of phallus-like elements of their instruments — i.e. the guitar necks — could support an ironic take on rock ‘n’ roll.

A third layer is about aesthetical strategies. Dada, Futurism and later Fluxus used to be framed as anti-art. As stated before, Lemones could be anti-rock. One of the dangers of focusing on the ‘anti’ in so-called anti-arts is that people tend to neglect the complex aesthetics in actual works of Henry Flynt, Tzara and alikes. Those artists were conducting a serious research to form; their aim was not to make ridiculous anti-art. Those artists were on a quest for new forms of beauty. The music of Lemones could be analyzed as a similar research. In my opinion they rely on the same aesthetical strategies invented by Dada, Fluxus, and No Wave to create new rules and forms in order to find a new beauty.

5 — The Problems of Interpretation

In this part I’d like to refer to Susan Sontag. She fulminated against ‘interpretation’. She was strongly averse to what she considers to be contemporary interpretation, that is, an overabundance of importance placed upon the content or meaning of an artwork rather than being keenly alert to the sensuous aspects of a given work and developing a descriptive vocabulary for how it appears and how it does whatever it does.

Reducing Lemones to a tagline; or framing them in the lineage of Dada, No Wave and Fluxus is ignoring their inherent qualities by ‘explaining’ them in the grand scheme of history. Using witty words and concepts like 'irony' or 'performance' is interpreting them in concepts used by more explanatory arts.

When we talked with Raskin, Bertels and Boudeau about these topics over a home-made spaghetti, it soon became clear that the concepts described above are in one way or another insufficient to describe what is happening.

On questioning their relation to visual arts, they stated that Lemones are all about music, not about performance art, happenings, nor detachment or irony.

“It’s really important that the core stays about music, that it’s a band, that it fits in the concert space…"

This framing into a lineage of important historical movements feels to Lemones a bit uncomfortable.

“We really appreciate these art forms, and we agree that people could refer to Dada/No wave when describing our sound. But it has never been a deliberate choice to put ourselves into these traditions. We don’t want to copy No Wave/Dada sounds because those are too hard to grasp, and non-existing as those definitions are too generalizing. These genres are used to label a wide range of bands and artists, each very different and unique. Dada has always been there – even before the art movement. We all three really love No Wave bands, but there’s much more subconscious shit in the sounds and ideas?”

Writing about Lemones is highly complex, I tried to describe their work by setting out a complex of thoughts (or interpretations) in which the sensuous, the art historical and the contextualized approach flirt with each other. But in the end I’m left with these short ideas:

My idea is that Lemones is all about music and about being in a band. In that sense, self-built instruments are an intuitive choice for limitation — no other than the decision to use only three chords; limitation enhances imagination, too many possibilities apparently kill the capability to invent new forms.

Everything I pointed out in the previous chapters is contextual. Absurdism, Fluxus and Dada-inspired strategies, and trans-medial approaches are not used consciously.  They are a a consequence of expressing direct and raw poetry; in their own words:

“At first sight, the band looks a bit absurd, but the music and lyrics are serious. The lyrics are not about love, it's about pretty serious things, intense kind of rants with a dose of humor and absurdity that tell where we stand for.”

Lemones are the manifestation of the current shape of rock ‘n’ roll, not unlike bands as Sweat Tongue, Guttersnipe, 75 Dollar Bill or Zad Kokar. They share a similar approach (not so much a similar sound), which is defined by a confusing, multi-layered complex to channel brutal and vital energy. History and strategies from other arts create an outfit in which pure and direct expression is possible, concerts tend towards happenings in which the ritual of rock ‘n’ roll is re-invented, shaking off its worn-out clothes. But as stated in the first chapter, rock ‘n’ roll tends to chase its own tail: when it was born in the 50s, Buddy Holly banged his instruments, and produced sounds as direct expression of his body. Equally so in the decades following, with the rise of psych rock, punk and no wave: The audience heard this, and danced. Welcome to the Gutter Party.

how I became a member
of the gutter party

stop biting your lips
and shaking your hips
this party is over!!

Photo report of KRAAK festival 2018
by Lyse Ishimwe
Editorial issue n° 11
Dear reader, Recently I stumbled upon an interesting article, published in the mid-60s. Reading old essays about art is something of a habit of mine. It helps filtering out the noise that is inherent…
by Niels Latomme
De Neus van God
Post-KRAAK festival chill down edition, with a smooth summer vibe and shout outs to our volunteers.
by De Neus van God