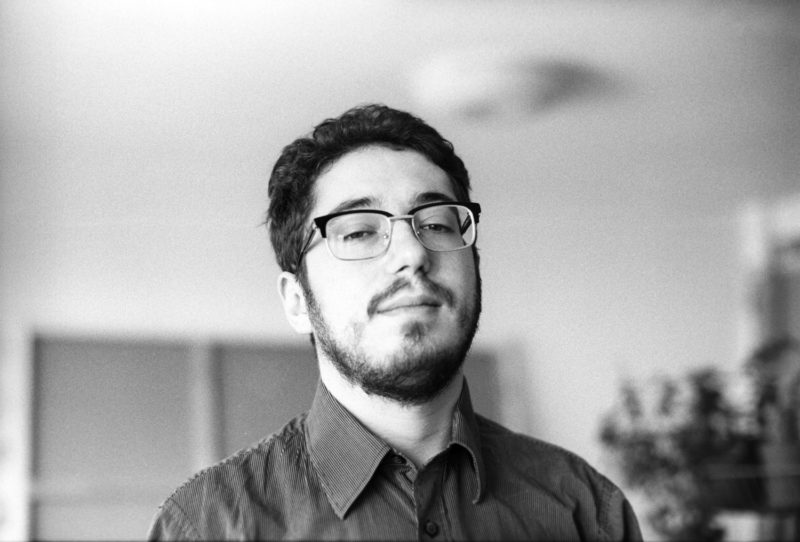 MOVING SOUND. Piano player and accordionist Leo Svirsky is an ex-punk with Russian roots who dwelled from Russia to Washington DC to end up in The Hague. He specialized in contemporary classical and avant-garde music — collaborating with Christian Wolff, Marshall Allen, Jaap Blonk and Veryan Weston. He just released a highly recommended album that displays a deepened meaning towards deep listening accordeon music inspired by the innovations by Pauline Oliveros. Right before Leo went off to Düsseldorf to play at Klangraum, we talked about his love for accordion and the mystical side to his album and his use of the accordion.
by Robbe Van Petegem

How did you end up playing the accordion?

Ah. My background is as a pianist and I was working a lot as an improviser, but a lot of the venues for that kind of music don’t have really great instruments. There are not a lot of opportunities to do your thing properly. So I thought: what’s something portable that I can still use some of my keyboard skills on? I picked up a second hand accordion and just started working on it. Then I fell in love with it. Most of the interesting things about accordions have very little to do with it as a keyboard instrument, but because you produce the sound by moving the bellows from the left to the right.

I found that I was able to do all the things that are normally associated with electronic music. My accordion goes one octave higher than the piano, which produces these very high pitches, very close to sine tones. They do strange things that you could do by moving speakers around. They are more exciting sonically, because they are produced physically by pushing air through metal.

This is really a exciting aspect, compared to piano. With accordion, you have to make it move to keep on making the sound. It is also very good for playing fast stuff, but it is really unique how you have these two pitches that are static but are moving away or apart from each other. Pauline Oliveros is probably the first person to just use that aspect of the instrument. I don’t think it is possible to write for accordion and not think about her.

Is Pauline Oliveros’ Deep Listening an inspiration for your work? Are you trying to create a meditative space?

I think about it more as a kind of tension. My latest record [Heights in Depths] has these two pieces with very different strategies: the first piece is about pure sound. In the second piece the same intervals get reused: chords and melodies come back. But I’m really interested in this feeling when you are listening to something as music: you’re following the harmony and the melody, but all of a sudden there is something about it where its aspect as pure sound comes out. So it’s this tension between music as a kind of construct and then hearing this as pure sound, which is similar to what happens to people who recite mantras or something like that. I’m after this feeling of the uncanny: “oh, that is still an accordion” (laughs).

Is this where the connection with mysticism comes from? Since your album Heights in Depths takes its name from a mystic text.

It’s a funny text, and it’s a difficult one to read because there are many layers of meaning. Originally I came to it from A Revolution of Everyday Life by Raoul Vaneigem, the situationist-international. He got it from Norman Cohn’s book The Pursuit of the Millennium. Cohn’s book is about all these medieval heretical movements, which are kind of anarchist movements.

This is a time before there was any atheist materialism, so this kind of criticism of the church was phrased as a direct mystical experience: there is no authority but yourself. Before the 19th century this was necessarily coming out of a private mystical experience. Heights in Depths and Depths in Heights comes from the English civil war and was written as an apology, a sort of “I’m sorry but not sorry”: it is him recanting his heresy for the church of England. After he spent years in prison during the war writing these mystical texts, the writer actually ended up becoming a middle class doctor. It is this “I prophesied but I don’t prophesy anymore, but this is what I saw.” The text is about how…. Well, I don’t know what is it about, but it is narrating an experience of the unity of all things. So, it is coming from a single point in seeing how all difference radiates from this one point.

In a way the A-side is like this one, the unity, and Depths in Heights, the B-side, is the diversity, when you see the world when you come back down from this experience. It’s also cool, since in a way it is a forerunner to Pauline Oliveros’ practice.