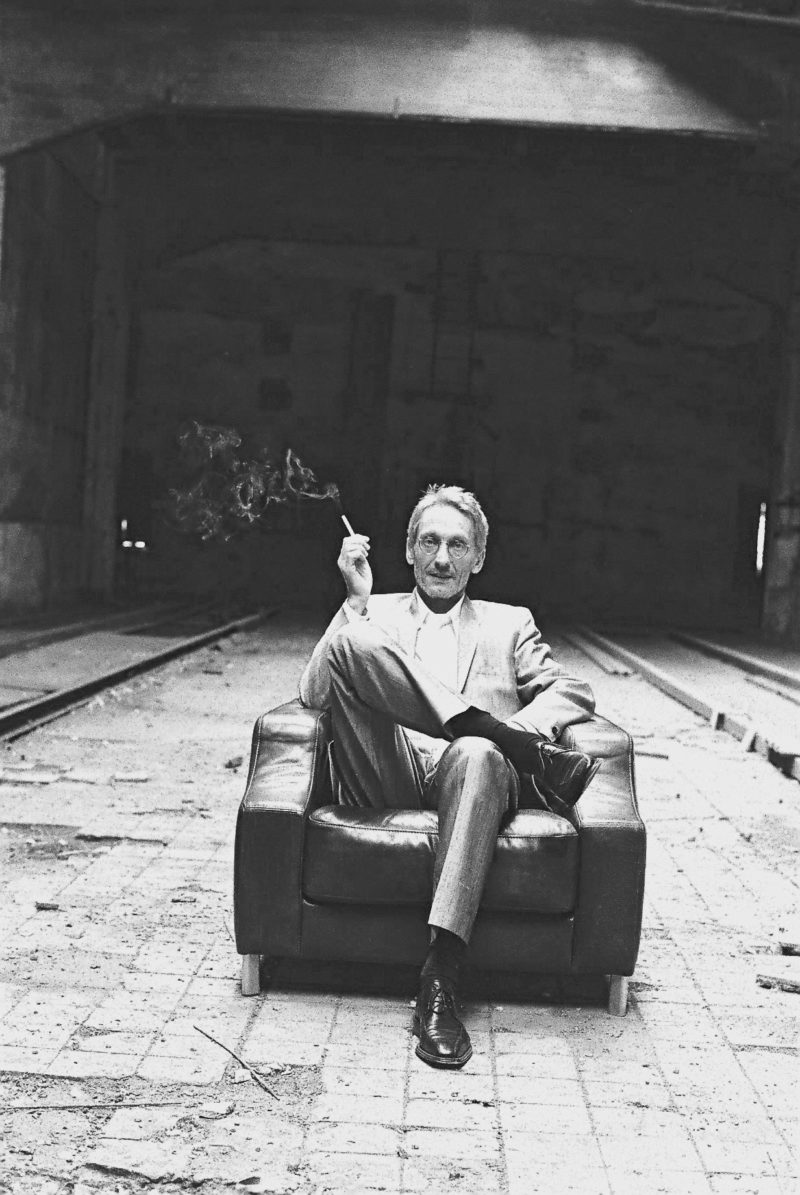 AN ESSAY ON E2-E4, AN OPENING MOVE IN CHESS OR A HIGHLY INFLUENCIAL RECORD IN CONTEMPORARY MUSIC. Manuel Göttsching is pretty much a living legend. The man behind krautrock pioneers Ashra Temple (with Klaus Schulze) and Ashra, is basically one of the founders of Kosmische Musik, post-Eno ambient and electronic music. With his 1984 solo masterpiece ‘E2 - E4’ he created a 58 minute trip through icy synths, metallic percussion en spacey guitar solo’s. Göttsching geniusly combined the minimalism of composers like Terry Riley and Steve Reich with an irresistible groove. Thus the German musician – along with colleagues Kraftwerk – unknowingly inspired an avalanche of imitators on the other side of the Atlantic who would pioneer genres like house and techno.
by Niels Latomme

Let me tell you something about the millennium old game of chess. Some people find chess incredibly dull, others are addicted to it. The game fights a war between two minds, equipped with the same weapons, and the same limited amount of moves. It’s a war ruled by restrictions, and it is incredible poetic; or, depending on which side you’re on, it’s a game for nerds, boring, slow and abstract. No matter which angle you look into it, although it’s an extremely dry game, it earned its place in the history of mankind. It even provoked a complete mythology, as it was a huge shock for mankind when a chess champion got beaten a computer. Not to speak about books like The Chess Novel, by Stephan Zweig, or the records by Wu-Tang Clan.

Some people feel the same about the record E2-E4 by Manuel Göttsching, recorded in 1981, but released in 1984 — in some ways a pivotal year. I was talking to Spencer Clark and he finds the record incredibly dull, and values Ashra’s output way more than this piece. But other people think it’s one of the best records ever made. This record, not unlike the game of chess, earned its place in musical history, being considered as the first house or techno record. (A side remark: Göttsching admitted that he not really likes dance music.)

The record is loosely inspired by chess. But, it has more resemblances to chess than the cover and the title. Let’s start with the title: “E2-E4” is an opening move in chess, it’s called the King’s Pawn Game. Wikipedia says:

White opens with the most popular of the twenty possible opening moves.
Although effective in winning for White (54.25%), it is not quite as successful as the four next most common openings for White: 1.d4 (55.95%), 1.Nf3 (55.8%), 1.c4 (56.3%), and 1.g3 (55.8%).[2]
Since nearly all openings beginning 1.e4 have names of their own, the term “King’s Pawn Game”, unlike Queen’s Pawn Game, is rarely used to describe the opening of the game. Advancing the king’s pawn two squares is highly useful because it occupies a center square, attacks the center square d5, and allows the development of White’s king’s bishop and queen.
Chess legend Bobby Fischer said that the King’s Pawn Game is “Best by test”, and proclaimed that “With 1.e4! I win”.[3] King’s Pawn Games are further classified by whether Black responds with 1…e5 or not. Openings beginning with 1.e4 e5 are called Double King’s Pawn Games (or Openings), Symmetrical King’s Pawn Games (or Openings), or Open Games – these terms are equivalent. Openings where Black responds to 1.e4 with a move other than 1…e5 are called Asymmetrical King’s Pawn Games or Semi-Open Games

The title of the record might be misleading. The code is just one of the 18 possible opening moves, and is not as defining as such. Depending on the players, each game goes its own path. If you think deeper about cause-consequences, each opening has its consequences for the rest of the game, and I think you can apply this to the E2-E4 piece too.

Chess is a rigid game, a closed circuit with very defined rules. Each piece has its own movement, weaknesses and strengths. The board has only 64 places and the goal is very simple: you have to conquer the other party’s king. Paradoxally, its very rigid set of rules and limitation creates a field in which endless possibilities appear. It’s a field in that enhances imagination, psychology and poetry. You start a game, and by intuition you move pieces. You can learn about the best opening moves, and how to respond to the other’s moves, and eventually threats and attacks, but you can never rationalize the game completely. A game develops by having unconscious preference for certain pieces and their moves. Some people even claim that you can be read through the moves you make on the board.

E2-E4 is like the game of chess, meticulously composed. It’s a truly teutonic musical composition, more dehumanized than kraftwerk ever will be. If you listen closely, the piece is made out of 8 layered sources. The sources — synths, delay’s, drumcomputers — are synced together, by a very influential invention called MIDI. It allowed the composer to prepare a set of limitations and defined rules, and let every source slowly fade in and out. During each part Göttsching tweaks and triggers the sounds, so that a slowly shifting structure appears. It’s not unlike minimalist avant-garde music, in which the base structure is founded on a few basic notes or structures that are repeated with a very limited amount of variations. The context creates this extraordinary effect in which the slightest change of the parameters —could be the note, the cadense, the rhythm, or the filter and the frequencies — has a maximum of consequences in the sound; the minimum of changes even defines the nature of the piece per se. The revolutionary aspect is that he applied minimalist idea’s to new technology, and showed the way for Derrick May, Juan Atkins, Jeff Mills and likes how to let people dance themselves towards transcendental salvation.

Although the record suggests a defined start and end, and even though it has 8 defined parts (again 8; 8 x 8 = 64, the same amount of squares on the board of chess) with names that suggest a specific mood, there is more to it. On a deeper level, you can consider E2-E4 as just one possible output. Göttsching could have started with other filters or other tunings and drumrhythms. As if every game of chess is one possible outcome of the very rigid system beyond it.

The emotional and the psychological plays a very big role in equally chess and E2-E4. As I pointed about above: the game of chess thrives upon rationalized rules and limitations. The concrete output is influenced by the players consciousness and even more, as we are not the rational creatures we want to be, but driven by forces that are the result of thousands of years evolution, by our subconsciousness. Every minor change creates a maximum of consequences. This defines the way we perceive the composition. He himself meant it as a abstract, minimalist piece. But history taught us that the record influenced a stream of dancers and techno musicians. You can either listen to it, or dance to it. But the complexity of sounds, created by a minimum of sources, let’s you drift away in it’s sheer beauty and emotional warmth. The record does not contain emotions, but I’m sure it conveys a lot of emotion.

One last thing I’d like to point out as a striking parallel in between the game of chess and the record. On minute 32.00, or just 2 minutes far in the part that is called Promise, somewhere in the beginning of the B-side if you’re used to listen it on vinyl, suddenly a guitar kicks in. Göttsching is a master guitarplayer. His work with Ashra Temple, and even more the album Inventions for electric guitar exemplify this. Moment 32.00 is a flipping point in the record. It suddenly changes the complete mood of the album. Depending on your mood, it could make the timeless sounding synthesizer structures sound like a cheesy, kitch, outdated lounge track. Is it the guitar shredder Göttsching coming in, as a persona, pointing out that electronic music is minor to real instruments? Or couldn’t he just resist to show off his guitar skills?

It could be also another equivalent to a game of chess. Every game of chess has a flipping point. The point of no return to which everything before was building upto. The point that makes clear who is losing and who is winning. Mostly the gameevolves pretty quickly after that point, one of the parties will lose his or her important pieces and the game falls apart till it reaches the hunting phase. Even then the game can be equally dull or exciting, depending on how you look to it, or on your personal subconsciousness. If the Guitar Part is consciously conceived as the point of no return in the Göttsching record, I think he truly understands the game of chess, and its merits. He could have kept on building up towards the so-called ‘drop’, the point in which the beats falls away on clubfloors, to pimp up the dancers. But he didn’t…he choose to use his master guitar skills to change to mood, as one of the possible outcomes of the rigid game. To point out the endless possibilities and to prove that a rigid structure can be the portal to deepened aesthetic beauty.

Editorial issue n° 8.1 — Eastern Daze III
We proudly present you the third edition of the Eastern Daze festival, a co-joined effort between Sound in Motion, Vooruit, and ourselves. This edition is again loosely inspired by the common and para…
by Niels Latomme