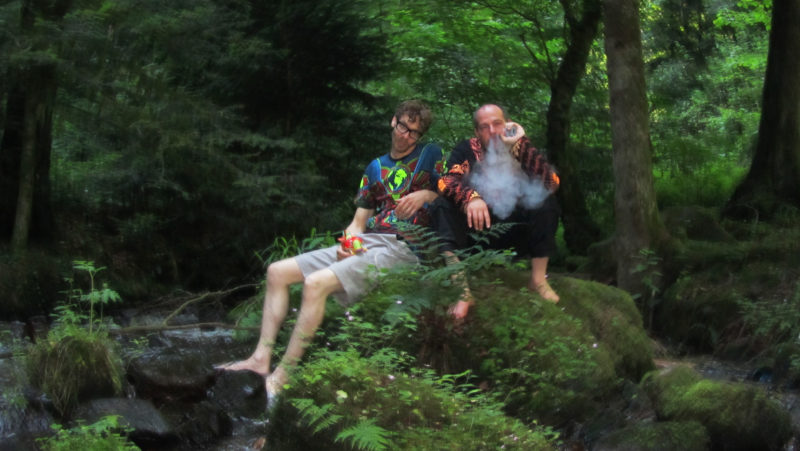 Paradon’t is a German duo that hails partly from the Black Forest, partly from Southern Germany. The duo — Don’t DJ (part of The Durian Brothers) and Paraklang, both renowned solo musicians — met each other through love: Volker (Paraklang) was the boyfriend of Florian's (Don’t DJ) sister, so when Florian visited his parents (who lived in the same city), Volker's studio became the natural hangout for the night-time. They developed a new form of techno music, for which they infused graceful formal experiment with trance elements and polyrhythms.
by Niels Latomme

Historically (if that still means something in the second decade of the third millennium) their music can be put in the lineage of the experiments of 60s avant-gardists like Stockhausen, or the sonic experiments in rhythm and texture of Autechre in the late 90s and early 2000s. Equally they are part of the current revival of computer music, although the brutal and hard-core take on electronic music reveals an urge to detach from history, meaning, function and context.

The revival of abstract electronic music in the late 2010s was curious. In the late 90s, the computer was praised for its endless possibilities, musicians embraced it, maybe blinded by the shining light that every possibility was within reach. After tons of glitch, clicks ‘n’ cuts and breakcore records, musicians started to realize that actual musical imagination is enhanced by limitation. In the early 2000s, noise musicians leaned towards non-computerized music, using scrap metal, found objects and B-grade instruments instead of the computer.

15 years later, with the rise of platforms such as bandcamp and the growing importance of social media, the computer re-established its role as a full-fledged instrument. Maybe social media pushed human interaction into the terrain of the non-physical and the virtual; the computer acts almost as vital tool to be connected, and share your feelings and humanity. Paradon’t can be seen as exponent of these developments. The members live in different cities, and also their tracks are mainly created over the highway of ones and zeros.

Paradon’t stands out compared to their fellow electronic musicians. A lot of electronic outfits tend to reinstate the synthesizer experiments from the 70s and 80s, diving deep into well-known retro-futurism; other forms of electronic music researches the role of human emotion in this virtual context. Paradon’t, in contrast, limit their practice to a hard-core exploration of the basics of music: rhythm and texture. Electronic and computerized methods clearly enable this.

On theoretical level, electronic music equals the dissolution of humanity in the Absolute. Computerized music promises an endless array of possibilities: besides billions of options to manipulate and create sound, it is possible for algorithms and even AI to autonomously produce music. One could state that electronic music conveys a purification of music, as it enables a detachment from emotion, (post)romantic narrative, meaning and even human involvement; music can transcend to pure form. In the late 18th Century, some musical thinkers like Wagner coined the idea of Absolute music: music as a self-regulating and detached organism without any reference to external, meaning phenomena and realities. In the past composers like John Cage, and the atonal school, experimented with strategies to create such music. The compositions where sometimes impossible to perform, and the most radical applying of this idea led to music that only exists on paper, in the form of a score. Cage even developed strategies to shut down human choice and free will, by using chance operation, or using star maps to create scores. Electronic composers in the post-WO II avant-garde, developed technological means pursuing automatic music, independent from human musicians, freed from their errors and limitations.

One might argue that such formal art bears no relation and as such no relevance to the “real” world. Upon this question, Flo Meier a.k.a. Don’t DJ answers:

“You don’t even have to call Paradon’t music! In the end it’s all up to the listener! However we would be delighted if some listeners regard our stuff as deprived of meaning: Like all music it certainly has some internal structure that resembles language in parts. And music is often loaded with meaning — from very distinct like in national anthems to vaguely emotional ones like the blues-scheme in general. However a music without meaning would be a vessel to travel beyond the realm of representation which normally encompasses our ability to think — we would be honoured if to some listeners we could provide a useful tool for those kinds of explorations into realms hardly ever accessible to human consciousness!”

The sole reference (or meaning, for that matter) to an external world might be the Exotic. Paradon’t sounds like an electronic version of African polyrhythmic music. Also the titles might refer to exotic language (it could be Asian). When we asked if they are referring to an external reality outside music, more specific to existing non-western polyrhythms, Florian opts for a vague answer:

“Maybe. Maybe not. We never checked. All rhythms we use are self-written or produced by algorithms or a combination of both, some are played live, too. It is quite possible that some have been used before (in 200000 years of supposed musical history someone might have come up with them...) and it is also entirely possible that there are some rhythms in there that have never been heard on earth! If the universe would be infinite (no idea if it is but it might as well) and we consider the rotation of planets around stars and that of solar systems around galaxy centres and that of galaxies around whatever as non-western rhythms, chances are that all the rhythms we used were or will at some point occur in that infinite variation of rotation-systems.”

And what about the track titles? Florian is outspoken on the fact that their music is absolute, as even the language surrounding it is non-human:

“The track titles are in non-terrestrial languages - as far as we know. We did not want to reference any culture known to us - neither in artwork, nor track titles, nor rhythms or harmony!”

The last resort might be the techno club. Original techno music envisioned an almost dystopian, or at least a highly futurist vision on mankind. Techno would be the soundtrack of the dissolution of the individual into the collective. The dance floor stood as a symbol for this. People who visit a techno club might recognize the feeling of being part of one great, dancing collective, in which the Self is dissolved into one big consciousness. The DJ is the enhancer of this ritual. Also he is absent, turning records in a dark corner and releasing anonymous white labelled 12-inch records. In the late 90s and early 2000s Autechre expanded this, and conceived their concerts as pure experiences in which the individual dissolved in the environment of a darkened concert venue. The only option was to submerge as individual in their brutal, sprawling, highly too-complex-to-rationalize rhythms and textures. Also Paradon’t feel at ease in this dehumanized context: “We do, we are! We enjoy dancing for long nights. We love the aesthetics of techno and psytrance.” They remark though, that they want to take techno further:

“Yet in long nights the predictability of rhythms and track-structures sometimes bore us - we tried to make stuff we’d like to listen to in the club. However that’s just us — some listeners might better enjoy it somewhere else or for different reasons, which we are perfectly happy about. We are quite happy that anyone listens that stuff at all ;-)”

In short, no hope for humanity, music’s future is meaningless and computerized. Music will be stripped down to its penultimate form: an immersive, brutal and inescapable experience of the Absolute. Paradon’t will be the masters of this experience.

Editorial issue n° 11
Dear reader, Recently I stumbled upon an interesting article, published in the mid-60s. Reading old essays about art is something of a habit of mine. It helps filtering out the noise that is inherent…
by Niels Latomme