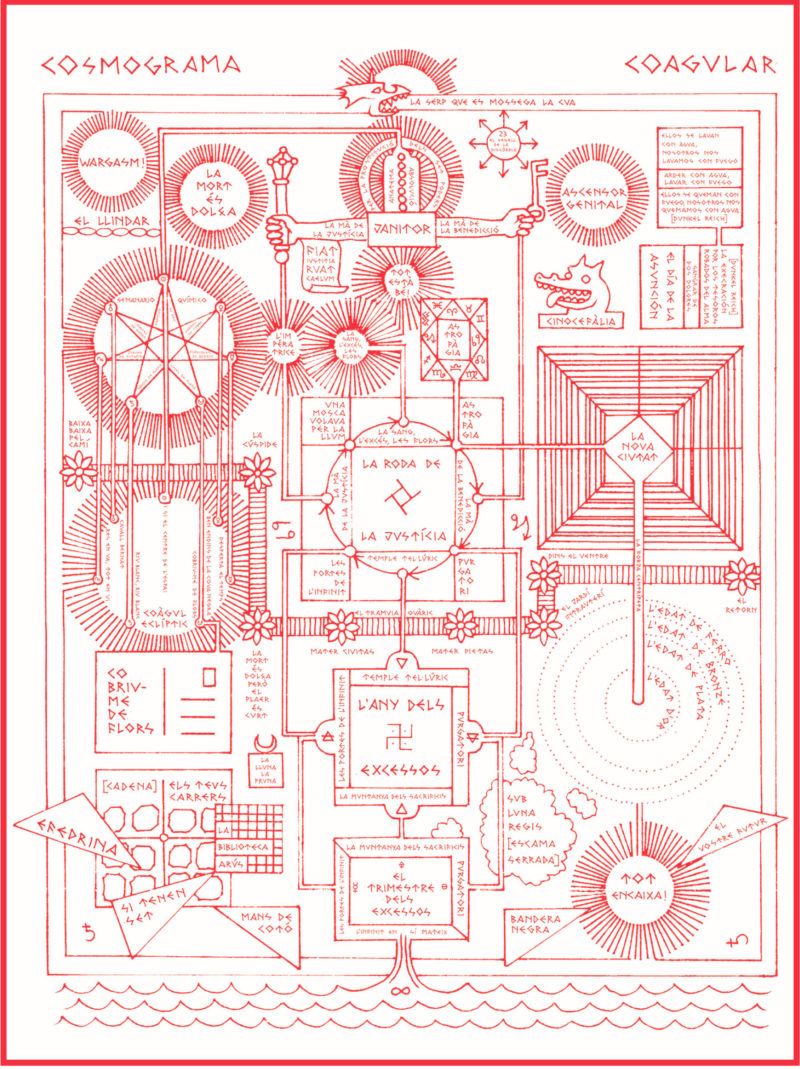 It all started with a WARGASM. Once I crossed THE BORDER I passed through THE GATES OF INFINITY, descended unto the TELLURIC TEMPLE until I fell trapped at the PURGATORY, to later overcome my own condition and climb back to THE MOUNTAIN OF SACRIFICES. It was THE YEAR OF THE EXCESSES, which preceeded the moment when I summoned THE SNAKE THAT BITES ITS TAIL. Then I jumped into THE OVARIAN TRAM: going DOWN AND DOWN THE ROAD, I don't know how it suddently drove me to THE APEX, where I realized that DEATH IS SWEET BUT PLEASURE IS SHORT. This enabled me to enter the deeps of MATER CIVITAS, until she revealed me that she was also MATER PIETAS. She showed me the way to the opiaceus flowers of THE INTRAUTERINE GARDEN, where I drank the wine that finally brought me INSIDE THE WOMB. All this initiation process prepared me for THE COMEBACK. After that, I took the GENITAL ELEVATOR to check once again that DEATH IS SWEET. I got nothing more than twenty-three seconds of time to pronounce the sixty-nine words required to charge the SEAL OF DISCORD. In that industrial building I became the JANITOR: I had a key to open the Gate of Heaven with THE HAND OF BENEDICTION and I had a scepter to open the Gate of Hell with THE HAND OF JUSTICE, only when it was of extreme necessity. Then I met with my frater at his Dvnkel Reich, where he claimed that THEY GET THEMSELVES BURNED WITH FIRE, but WE GET OURSELVES BURNED WITH WATER. A daring claim to which I replied that more likely THEY WASH THEMSELVES WITH WATER, but WE WASH OURSELVES WITH FIRE. Two assertions that lead us to get used to BURN WITH WATER and WASH WITH FIRE. Already into the Demonodrome, I remembered how to play with THE BLOOD, THE EXCESS, THE FLOWERS... I incarnated myself as THE EMPRESS, to saturate the mechanisms and make sure I had the necessary teenage lightning to keep on doing what I wanted. This situation got to the point that I even learned the virtues of the CHEMICAL WEEKLY: from then onwards, every Monday would be a SILVER MONDAY, every Tuesday would be an IRON TUESDAY, every Wednesday would be a QUICKSILVER WEDNESDAY, every Thursday would be a TIN THURSDAY, every Friday would be a COPPER FRIDAY, every Saturday would be a LEAD SATURDAY, and every Sunday would be a GOLDEN SUNDAY. As I saw that each thing was in its exact proper place, I couldn't restrain myself to scream: EVERYTHING IS ALRIGHT! I also got the priceless opportunity to learn the sacred art of ASTROPHAGY, a way of feeding myself with the twelve powers of Heaven to become a star. FIAT IUSTITIA RUAT CAELUM. But then I came back to shave the dog with my frater at the Dvnkel Reich, and we started TO BLEED FROM TWO PAINS: while he was into THE EXECRATION FOR THE ROBBED TREASURES OF THE SOUL, I simply consecrated that it was THE DAY OF ASSUMPTION. In case it was not enough, I went up to the Observatory to attempt an ECLIPTICAL COAGULATION. This operation implied to AWAKE TIME for Mercury, spending NOTHING IN VAIN, EVERYTHING IN WINE for Jupiter. It had to be done with Venus AT THE VERY DEEPS OF THE BLACK CAVE, to later be able to emerge through the WHITE RIVER, WHITE RIVER for Saturn. I wanted to ask the Sun: WHAT IF THE CENTER OF SPACE WAS NOTHING MORE THAN A VERTEBRAE OF A LAMB? But what I really did was just asking the Moon to COVER ME WITH FLOWERS while riding the BERNARD HORSE with Mars. It was too much for me, so I took in consideration to pronounce an ANATHEMA (but also an ABSOLUTION) FOR THE PROSTITUTION OF THE SEVEN POWERS. One day I was distracted singing a song I remembered from when I was a child, that spoke about the dangerous fact that A FLY WAS FLYING THROUGH THE LIGHT, when suddently I saw THE WHEEL OF JUSTICE rolling down the steet. Fiery and powerful as it was! It contained so much of the work already done: on the side of Capricornus, altogether with the trapped FLY there was THE BLOOD, THE EXCESS, THE FLOWERS, the ASTROPHAGY and THE HAND OF BENEDICTION; and on the side of Cancer there I meet again (oh since how long!) with the PURGATORY, the TELLURIC TEMPLE and THE GATES OF INFINITY, and also with THE HAND OF JUSTICE. It was time to learn the sacred art of CINOCEPHALY, which gave me the strength and kindness of dogs. With lots of suffering and fruitless efforts, I worked hard until I finally found THE CENTRIPETAL FORGE, a device that enabled me to start a pilgrimage through the four ages in search of THE NEW CITY: I walked and survived the dreary regions of THE IRON

AGE, learned about the numbers of all things at the palaces of THE BRONZE AGE, died while fighting at the holy wars of THE SILVER AGE, and released that EVERYTHING MERGES at the timeless seas of THE GOLDEN AGE. But it is not with COTTON HANDS that you can hold the BLACK FLAG. With EFEDRINE or without it, even if THEY ARE THIRSTY, your ultimate goal should be to provoke the effective attainment of YOUR FUTURE.