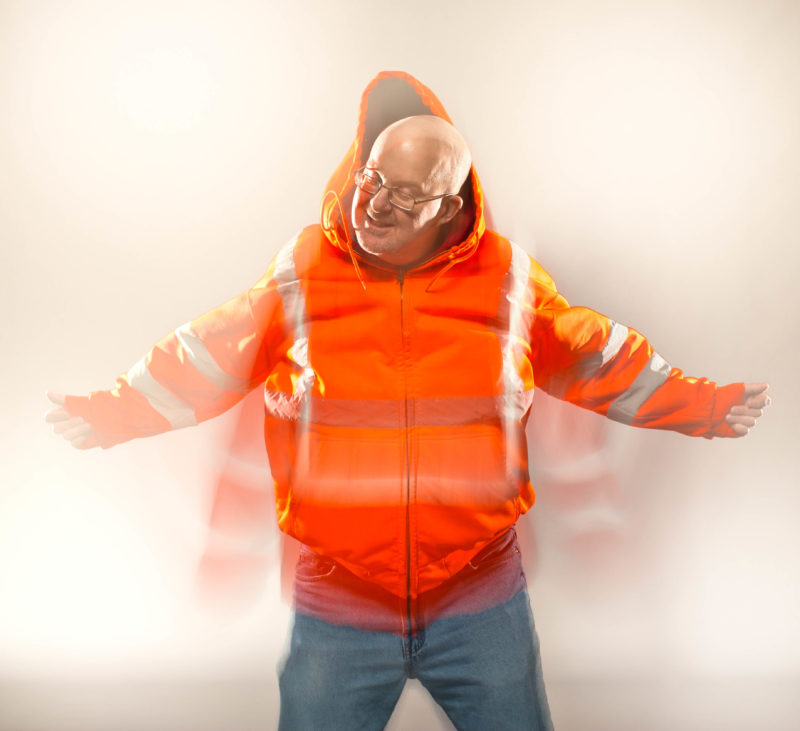 Bryan Lewis Saunders is an intense performer and visual artist. He searches the dark corners of himself and mankind in general. He goes to places where average people are not willing to go. His life seems to be a continuous per- formance in which taking drugs to make self portraits is a logical thing to do. Or regardless of what people think of his disturbed mind, he records himself while sleeping and uses the recordings as source material for albums. He has collaborated on performances and other recordings with fellow dark hunters of the true grotesque John Duncan and Leif Elggren. Most interesting is the unconscious book on tape called, The Confessor, in which our own Razen provided the soundtrack for the title chapter.
by Niels Latomme

Obsession seems to be a big issue in your work, how do you relate to it?

I would say obsessions come in different forms for me. In drawing and painting it’s about forced obsession. I make myself to do it everyday. The drawing is of course consciously obsessed. For the dream recordings, the sleep works, I have developed a technique to press the button and record myself sleep-talking while I’m unconscious. The regular spo- ken word stuff, the Tragedy, there is obsession in the writing process. I will write one sentence, and repeat it over and over again until the next sentence comes out. I keep going like this, and then by the time I get to the 10th sentence it has become really forceful and natural.

Could you call it a stream of consciousness?

When I’m awake it is, but when I sleep it’s definitely unconscious because I don’t remember having said any of it while I’m asleep of course. When I’m writing for the spoken word performances it’s not a ‘stream’ of consciousness it is more like gun shots of con- sciousness. I repeat the same thing over and over again, then some spark ignites and the next sentence comes out. So I don’t quite know where that fits within conscious states.

Why are you so interested in these kind of techniques?

It’s really interesting to figure out who you are, what makes me think and what bothers me. It’s good and helps me become a better person. To find out who I am. When I was a kid, I used to be a bad person. Now I’m good, but I can become bad again. It’s all part of self discovery.

So it’s therapeutic? Definitely, the majority of the drawings are a therapy. The spoken word as well, but I’m not sure if it is for other people. You could consider the sleep anti-therapeutic, because it messes with my sleep rhythms at times. In the beginning I had four dreams a night, and I woke up and recorded what happened in each dream. Over time I started to fall asleep while I was still talking, or I would push the record button while I was asleep and catch myself snoring or talking. It became a compulsive act and began interfering with my sleep cycles. But now I’ve gotten used to it.

Tell me something more about The Confessor tape?

The album is one of 24 chapters from an unconscious book on tape. I used recordings I made during one night and compiled them. At the end of the night, when I woke up, I described what happened in my dreams. We put that in the beginning, to introduce the story but as the recording goes on, the story becomes more and more abstract and surreal as I slip out of consciousness. When you add music to vocals such as sleep talking, it makes my voice sound awake when I’m not, but like I’m on drugs, or really tired. The recording was made from eight hours of sleep, but I cut out all of the silent space between speech and made it one narrative. The challenge is to translate those recordings into something that people can understand. Most of my dreams are nightmares, so the recordings are not really popular. The subject matter is unsettling, people don’t want to listen to it really. The recording I made with Raymond Dijkstra is maybe the best one I’ve had suited to transfer dreams to another person. I had a dream about a bobcat and I spoke about going forwards and back- wards. I said some cryptic things and layered real sounds of bobcats on top if it. Then I played the audio forwards and backwards. Raymond added sounds of scratching on glass. I had hoped that when people listened to the album on repeat with headphones on while falling asleep that the bobcat would then enter into their dreams. Some people have told me that it has happened. People have always been interested in dreams and if you’re recording yourself talking while dreaming it adds a lot of details to it, not like writing down your dreams when wake up. You tend to forget things as you awake. But to record the dream while you are experiencing it takes you as close as possible to being in the actual dream state. Unfortunately I have a lot of disturbed dreams. They’re not the kind that the average person would be interested in.

Not one bit. I never edit the bad words or the messed up stuff out of the recordings, I don’t believe in self censorship at all. If I want to discover what it is to be me, a human being, why should I hide the important stuff out of fear of what some people might think or say? Like Tom Waits says, ‘You’re innocent when you dream’ you know?

Do you believe in psychoanalysis?

I don’t believe in the symbolism of dreams at all if that is what you mean. If I, for instance, dream about milk, I am dreaming about real milk it’s not about my mothers breast, or semen, or anything Freudian or Jungian. The nature of dreams in the pre-REM stage or in the REM sleep are different. The dreams in the pre-stage are positive and self affirming, in the REM stage they are negative and dark—you are paralysed during this stage, you can’t talk nor push record so it can be interesting to mix the two types of dreams together. The majority of my dreams I see as rehearsals for possible future events in real life. When I dream about milk, it’s really practical. My brain is playing out the ‘what if?’ question. People don’t remember that much of their dreams, so they’re missing data I believe and can’t fully perceive them as possible event rehearsals for their wakeful life.

The surreal part comes from the fact that language has the ability to affect the events within the dream. For instance, if I dream that I am at a party with amphibians and there is crystal meth. Then the language part of my brain may get confused, and instead of thinking ‘methamphetamine’ I think ‘meth- amphibian’. That mistake can change the course of the dream and suddenly it’s not frogs that are doing meth, it is another entirely different species ‘meth- amphibians’ and they start growing legs out of there head, the surreal stuff... Language is processed imperfectly during the dream state, I believe. All the sensory input during a dream, comes from the brain and is affected by the language and emotional processes working on their own, basically. I believe but who knows for sure?

That’s the reason why I and other people probably find it so fascinating. At this moment, lucid dreaming is of no interest to me. I don’t want to influence what’s happening naturally. To me it cheapens the true nature of who you are, and I don’t want to mon- key with that. But that could change in the future as I keep exploring.

Editorial issue n° 5
Dear Abu Bakr al-Baghdadi, I am obsessed with cycling. You now might suspect the opposite, having devoured the fifth issue of this publication so utterly devoid of any irony.
by Niels Latomme