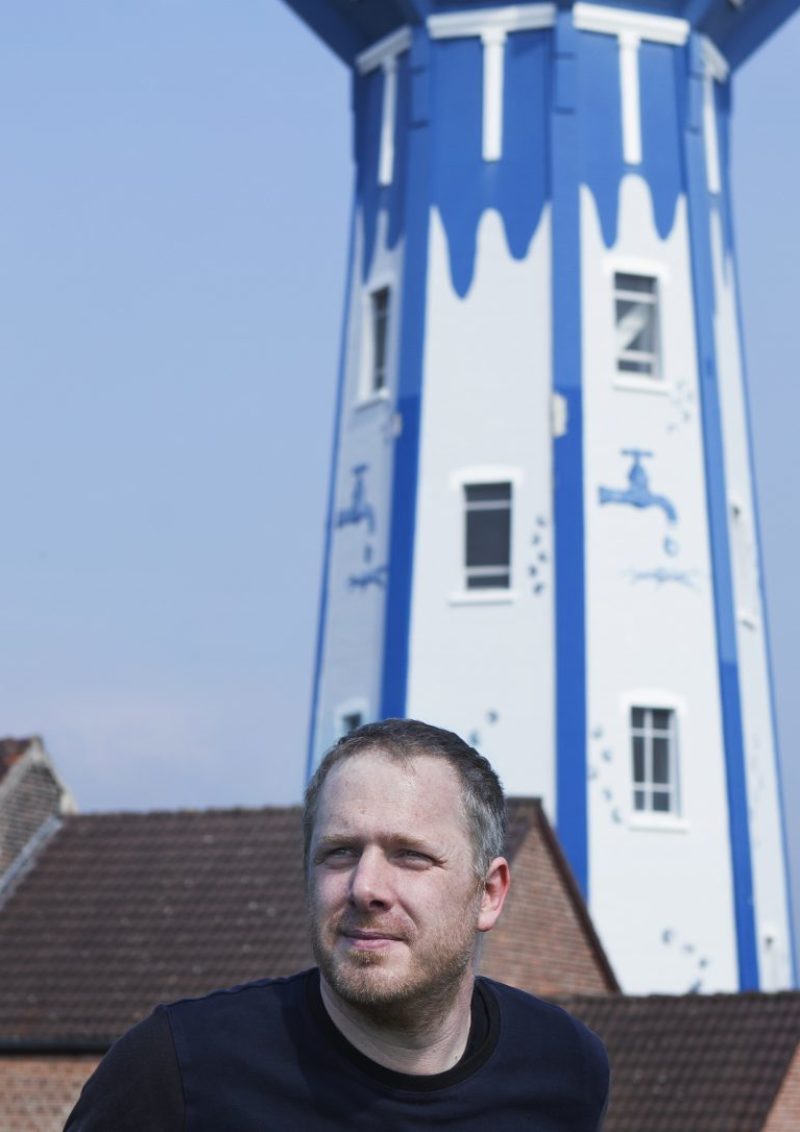 “I’M LIKE WATER, FOLLOWING THE PATH OF THE LEAST RESISTANCE’”. With ‘The Drain’, 38 year old Belgian psych folk musician Bram Devens made a traditional guitar/voice record. If only you could understand the lyrics, you could call it ‘classic’.
by Joeri Bruyninckx

Everything about this record feels very close to home?

Location and home was always a thing on all my records and record covers; a house, a view from my apartment, my dog, pigeons in Brussels. I prefer to look around my actual place and time, and avoid mythical and mystical references in my music. Create a fiction from reality, not the other way around.

Do you see yourself as a guitar player in the post-John Fahey tradition?

I don’t understand traditions enough to be part of any. Not just technically, but also culturally, historically and geographically. My background, growing up and living in Belgium, is too far removed from these traditions to feel like I’m part of it. However there is an influence, but I never want to get too close, or too deep into it. Some things you like, you should not get too close to it, others you should go really deep, but sometimes when you study it too much, you destroy your initial love for something. You run the risk of becoming too analytical, and then too critical. So I keep looking at it from a distance and admire it, but don’t approach it too much. It stays superficial. That’s ok. Try not to fall back on mannerisms, but look past technique and sound.

I think being lazy when it comes to your own music is very important. Don’t force it or put too much effort into something, so you are closer to your own personal voice. Sometimes you have to challenge yourself by trying new things, or it would become boring, but not too often. It’s like water. Water flows downward on the path of the least resistance. It’s not easy to be lazy though. You have to force yourself not to force yourself.

You played in Takoma Park, where John Fahey grew up. Can you tell me what that was like?

Marc Minsker, who invited me in 2014, lives nearby. He made  a documentary on John Fahey, entitled ‘John Fahey: The Legacy of Blind Joe Death’. He drove me around and pointed to the house Fahey grew up. You get a better picture of the surroundings, and a better understanding of the music.

I played at the Takoma Park Community Center with Fern Knight. We did a live soundtrack on some Maya Deren films.

I did a lot of touristy things in the US; saw where JFK was shot, saw Faulkner’s house in Mississippi, ... We went near where Elisabeth Cotton used to live in Chapel Hill as well, and I visited the ruins of a church where Blind Willie Johnson is supposed to be buried in Texas. Coming from Belgium it makes you realize this music comes from an actual place and time, and not some fictional land you read about in the liner notes of the CDs you got as a teenager from the library.

A line in Fahey’s autobiography I remember is: “I could have had a normal life if I wouldn’t have got into music”. Do you think that too, sometimes?

Nobody has a normal life. There is no such thing. Doesn’t matter what you get into. You also visited record collector Joe Bussard’s home during your last US tour. Can you tell me about that experience?

Marc Minsker took us to visit him. Marc teaches nearby where Joe lives and takes his highschool students to see Joe from time to time. Having a physical record collection is an alien and foreign concept for these kids. Why would you need that if you can stream to your phone?

We visited Joe Bussard and he gave us the tour and played us some records. Amazing. He played Mississippi John Hurt’s ‘Frankie’. Clean copy and at the right speed. Huge difference with how I heard that before.

Then he got the Black Patti record, The Down Home Boys’ 1927 recording of ‘Original Stack o’ Lee Blues’, which he told us was his most valuable record, only one known copy. He put it on the record player, then let it spinning for a while, and showed stuff he found with his metal detector; coins, weed pipes, bullets, etc… for about twenty minutes, one drawer after another, while the record kept spinning. Seeing his collection, his lifework, was very impressive and beautiful.

If you are close to John Fahey as a guitar player, than to Jackson C Frank as a songwriter.

I love Jackson C Frank, but I’m not sure about a direct influence. I discovered his music only a few years ago, too recent to be a direct influence. His songs are more traditional songs with verses and a chorus. I have never really written a song like that. He has a lot of focus on  lyrics, fixed melodies etc. Less so in my music. Writing songs like that doesn’t feel natural to me.

For a very long time, I associated Ignatz with lo-fi home tape recording. You got  away from all that.

My four track broke recently after 25 years. If anybody has one for sale? I’m still looking for a replacement, but I haven’t been recording on tape for more than seven years now, and have been using a computer. Nobody noticed.

For this record, I had a bunch of songs ready I had been playing live for a while, but was never happy with the way I recorded them myself. So I spent a day with Christophe Albertijn at Les Ateliers Claus recording.

Records are to document what I am doing right now. I am playing less with pedals, loops and tapes and more straight up acoustic for the last two years. I started doing that more when I moved to Landen from Brussels. In Brussels, whenever I had to play a show, I took my stuff on the tram and then took the train. I could carry a pretty heavy suitcase filled with pedals and cables and junk. In Landen there is no tram to the train station so I have to walk or bike. I can’t take a heavy suitcase so I started taking less pedals and junk with me. With kids, I have less time to sit for hours recording with headphones on, so I play straight acoustic guitar when they are around so I can still hear them scream if they need me.

Do you play daily? Do you listen to music daily?

Yes I play and listen to music everyday. I play during the day and after dinner when the kids watch TV. My guitar is nearby and I play it whenever I feel like it.

How much of what you record is good enough for release? BD I think I release about 5% of what I record, or write. I have a big box with tapes and several terabytes of unreleased recordings. I don’t wanna listen to that to find out if there is anything worthwhile in there.