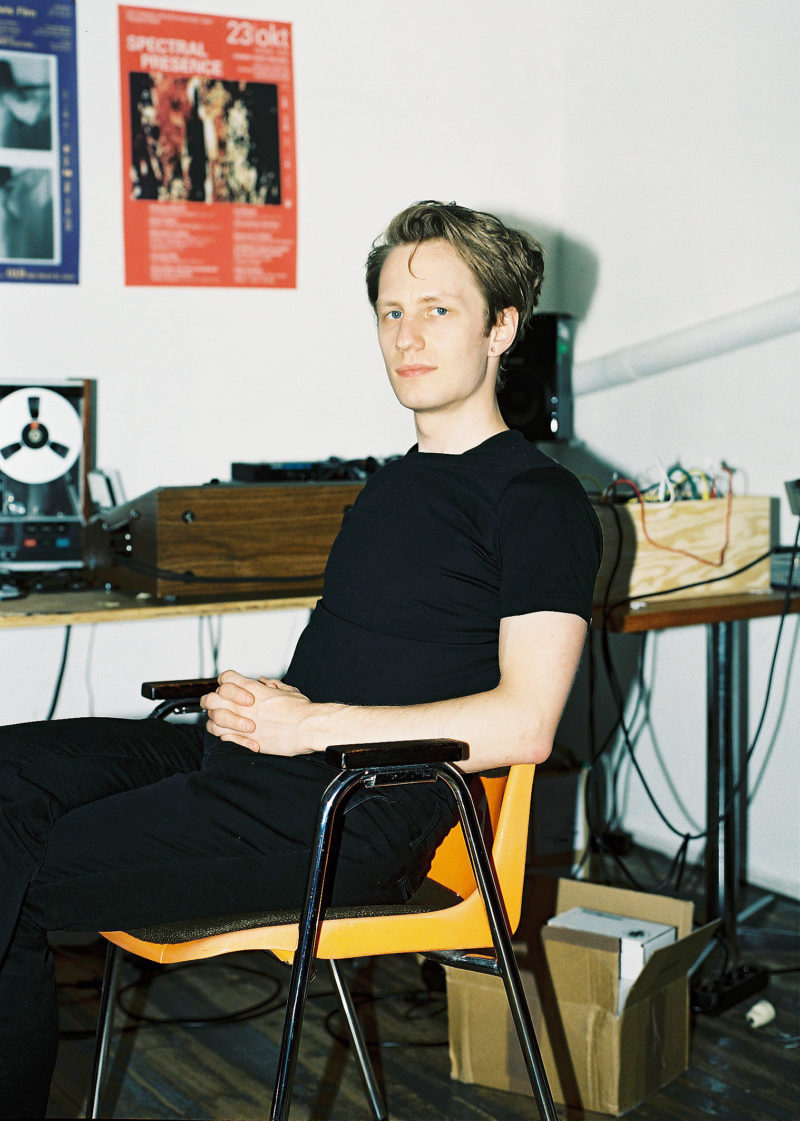 Crisp noises and subtle textures characterize the moody music created by Mathieu Serruys, inspired by film and irrational fear. Using mostly reel-to- reel tapes, he evokes intimate, comforting atmospheres, yet disturbing at the same time. While his debut, On Germaine Dulac (2014), was well-received, Serruys strives tokeep pushing the boundaries of his experimental music for future compositions and live-shows.
by Dylan Belgrado

“When I play live, I am mostly in my own world. I have little contact with the audience, and while that is not a necessity, I think a show can be more than simply me playing my music. It could be a total experience and that is what my shows are still lacking. For my second album, I have this utopic idea to design a complete visual language that will be more than just a backdrop for when I play live, but I am not sure if I will get it the way I imagine it now.”

For Serruys, it is clearly important to keep experimenting with new ideas and frameworks. He does not want to stay too comfortable. This is why the element of improvisation is a crucial aspect of his shows.

Chance is of course intrinsically part of the tape recorders he uses. He is not always in control of what the tapes will do. Sometimes unexpected sounds are created, at other times a sound he was aiming for simply does not come out.

“To me, experimental music needs to have this element of improvisation. As soon as you decide exactly what you are going to play beforehand, the experiment is gone.”

On Germaine Dulac is derived from a soundtrack Serruys made for a screening of Dulac’s La Coquille et le Clergyman (1928), organized by Cinema OFFoff. Having this film with particular atmospheres and moods as a starting point was a great way for Serruys to compose music.

“Film is the only medium that gives me a large feeling of involvement. A crucial aspect of film to me is its scenic quality or ability to evoke landscapes. There Will be Blood, for example, is a film that I often rewatch, because it is clearly made by someone with a love for striking images or landscapes.
Sergio Leoni also succeeds at creating landscapes in his films. To me, these particular shots or movements generate a rhythm, which is a great source of inspiration for making music.”

The music Serruys originally composed for the screening of La Coquille et le Clergyman is based on the film itself, but he wanted the album to be more than just a soundtrack.

“I needed to create an album that stood on its own, so I reworked the music that I originally composed for the screening. For example, the order of the tracks is different and I added and deleted songs from the list. When reworking the soundtrack, I kept the film and its atmosphere in my mind, so I did not drift away too far.”

It was Joris Verdoodt who asked Serruys to compose the soundtrack for La Coquille et le Clergyman. Verdoodt also played an important role in the development of the music for the eventual album.

“Joris joined me on multiple sessions. He was able to point out the good and the bad parts when I was unable to listen to the music clearly anymore, after working on it intensely. We continued collaborating after the album as graphic designers and on the label B.A.A.D.M.”

Serruys and Verdoodt have a clear vision for the music they bring out on the label. They invite artists to compose music from an extramusical framework that they provide.

“This framework is in one way pretty concrete but also gives the artist a lot of freedom and opportunities. For instance, we provided Sewer Election and Leda with the image of a dog preserved in ash after the eruption of the Vesuvius, shot by Giorgi Sommer, because we thought fit with their sound and outlook on experimental music. We do not simply want to bring out albums, but are striving to create something unique with the artists we personally invite.”

In addition, their graphic work is always motivated from the content they work with, and is not merely based on aesthetic choices. They like playing with opposing elements with ambiguous meanings.

Serruys’ music is also characterized by juxtapositions. A sense of comfort contrasts with the sense of an underlying threat.

“That is what I mean when I mentioned perceiving landscapes in films and music. I often go hiking in high mountains in search of more primitive emotions. The contrast between being completely exhausted after climbing a mountain, yet at the same time experiencing the greatest feeling of satisfaction inspires me immensely. What I also find fascinating about hiking in the mountains is an irrational fear that can suddenly submerge. Although this confrontation with fear may not be that present in my work aesthetically, it is a philosophical basis for most of my work. I want to push these contrasts between comfort and threat even more on my second album. For example, by exploring the combination of a soothing melody with harsh abstract noise.”

Serruys also tries to challenge himself by switching up the machines he plays with. He used to only generate sounds from tapes, simply using effects from the tape recorder itself, such as overlay and delay.

“For my second album, I try out new ways of generating sounds. I recently put together a modular synthesizer with which I can create sounds without using tapes. This will surely impact my sound and that gives me courage. At the same time, I sometimes fear that I will lose myself in the many different possibilities  I now get. I think, however, that fear often leads me into unexpected, but wonderful directions.”

Mathieu Serruys
Mathieu Serruys recently released his first record ’On Germaine Dulac’, a vinyl filled with crescent synths and recorded objects, matured through a signature reel-to-reel handling. He did so on the fr…
by Simon Apers
De Neus van God
by De Neus van God