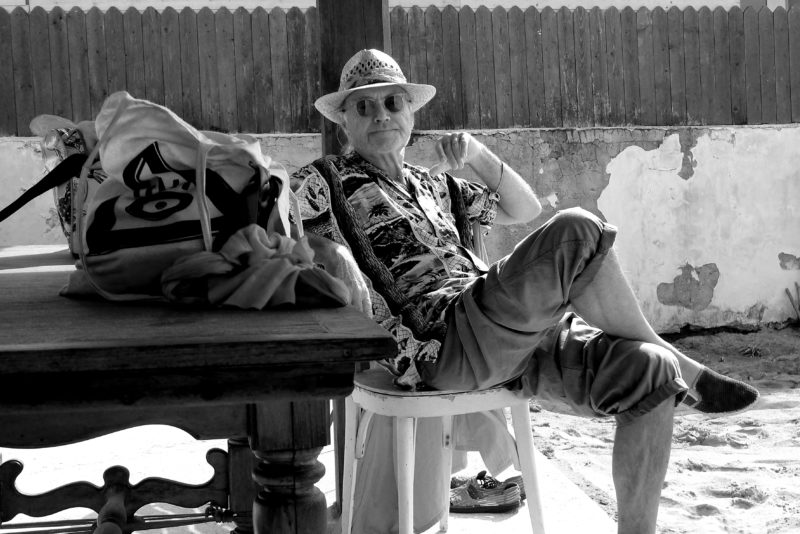 EASTERN DAZE CONNECTS TRADITIONAL FOLK MUSIC AND CONTEMPORARY UNDERGROUND. A REFLECTION BY MIKE COOPER. At 70 years old, Mike Cooper is a highly inventive bottleneck slideguitarist, a veteran of the music world and a fearless world traveller. During the sixties he was one of the upcoming stars of the British Blues and Folk boom, next to six string heroes like John Martyn, Michael Chapman and Roy Harper. He moved towards more unexplored territory on records like ‘Trout Steel’ where he combined country infused rock with jazz, free improv and field recordings. The last 50 years saw him creating an oeuvre that is now being rediscovered by new generations, thanks to a batch of reissues on labels like Paradise of Bachelors and - most of all - continuous exhilarating live performances. On his 2014 LP ‘Cantos de Lisboa’ Cooper collaborated with longtime fan and current guitar hero Steve Gunn. Mike Cooper’s music is impossible to pin down; there’s loop based exotica, deconstructed Hawaïian music, outsider ambient combined with straight up top notch fingerpicking and slide guitar playing. It’s deep, wholly original and impossible to forget once heard.
by Hans van der Linden

My musical life started with Skiffle which was the original DIY folk music genre of 50s Britain. Afro American folk blues for the most part and the thing that got me started. It quickly became hi-jacked by the mainstream and turned into a money making recording industry product. Original exponents came via a couple of sources such as Ken Colyer, a devotee of New Orleans jazz, who had a skiffle group that played between sets of his jazz band and Chris Barber who had a similar set up. Soho had skiffle cellars where only coffee was served as refreshment. It was underground in all senses. My participation was brief and I graduated to the next phase quite quickly which was to singing in a Rhythm and Blues band, The Blues Committee, still underground, mostly at The Latin Quarter Cellar Club in Reading where I grew up. The Latin Quarter in fact had three floors; the cellar bar, a coffee house on the ground floor and a real bar on the first floor where they had jazz. Jazz was still underground in the early 60s as well and held attraction to me when I was introduced to its more complex and radical forms by saxophonist Geoff Hawkins, a pupil of Lee Konitz (via correspondence course lessons – tapes and letters) who played in a later version of the Blues Committee. Improvisation was the key word I gleaned from the jazz I experienced. I figured it was what propelled the music and interested me. Along with my love of song (I sang from a very early age apparently) I wanted to combine both but the forms seemed to contradict one another. The song form is fixed and repeatable while improvisation is fluid and illusive. At least that was what I thought until I looked outside of my own tradition of English folk song or pop music.

My instrument of choice is lap steel guitar or ‘Hawaiian Guitar’ as it should be called, for it is indeed a Hawaiian invention, at least as far as I know. Imported into mainland North America, by Hawaiians, it captured the imagination of blues and then rock musicians who turned the slide into bottleneck and repositioned the instrument into its original playing position but the true believers still play it ‘lap style’. Hawaiian music is a true underground / folk music – lap steel guitar is called, in the Hawaiian language, Kika Kila and there is an acoustic finger picking version caled ‘Slack Key’ or Ki Ho Alu. People (especially Americans) tend to forget several things about Hawaii; first that it is, now, part of America, and secondly it wasn’t always; thirdly it has its own language and last but not least it was illegally stolen from the Hawaiians by American business men who deposed the monarchy (locking the then ruling Queen into her own home) and culturally occupying the minds and hearts of the population. At least thats what the Americans thought. In fact language and music was the one weapon that the Hawaiians did maintain and proceeded to use to great effect from the occupation and into the 20th century. Few American mainlanders spoke Hawaiian but Hawaiian music and Hawaiian musicians became extremely popular at the begining of the 1900’s. Hawaiian music was one of the first musics to be recorded (first onto wax cylinders) and went on to become the biggest selling form of music on records (78 rpm) right up until the 1930’s. Most of it initially sung live and on record in an underground language (Hawaiian) in a deliberate attempt by Hawaiians to maintain contact with their hi-jacked culture by singing in a language that mostly only they understood and even if perhaps you did happen to speak Hawaiian you needed also to understand context, cultural references and hidden meanings within the poetry of the songs to appreciate what was going on.

The act of sliding an object along a string is Hawaiian guitar in Hawaii but it exists in other cultures as well, although often not on a guitar but some other local instrument like a vina in India for instance. There are glissando strings in most folk cultures and my own playing is informed by many of them now not just Hawaiian music. Chinese, Korean, Japanese, Vietnamese, Greek, Arabic, African; all of these musics feature a string instrument played by sliding an object along its strings. Often that instrument is in fact a lap steel guitar because the Hawaiians and their guitar conquered almost every corner of the globe with their underground language, music and instrument and they still do.

I realised that in all of the musics quoted above (as well as in jazz) improvisation played a huge part in its energy and contributed to its long life.

Coming back to your question of where am I on the traditional / contemporary continuum? Combining with my love of improvisation and various techniques acquired from playing and investigatimg Blues, Hawaiian, Greek and other folk music I finally found a way of releasing the song from its fossilised state and turning it into something non-reproducable; a fluid form that is different everytime I perform it. Anything non-reproducable is of little interest to the mainstream and hence remains underground - fortunately.

Editorial issue n° 8.1 — Eastern Daze III
We proudly present you the third edition of the Eastern Daze festival, a co-joined effort between Sound in Motion, Vooruit, and ourselves. This edition is again loosely inspired by the common and para…
by Niels Latomme
De Neus van God
A special on the border and mind crossing festival Eastern Daze. A preview on VOORUIT, OORSTOF and KRAAK's yearly exploration of the non-ethnic and avant-western.
by De Neus van God
De Neus van God
A summer editions with music, tour comments and some exclusive beer tips by Perry Kraaivalk.
by De Neus van God
Van Snorhout tot Synthesizer
Over ‘exotica en exotisme in hedendaagse muziek’.
by Niels Latomme