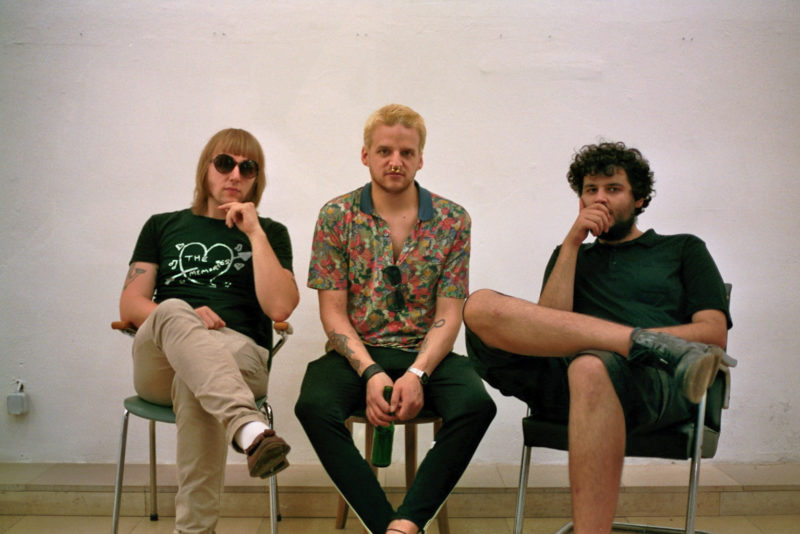 There still are big chunks of unknown territory left to unveil in the KRAUT rock genre. The fine lads of Transport bravely dedicate their lives to the exploration of those undiscovered realms. The collective is a free-wheeling monster dealing in Motorik Beats, psychedelic guitars and afro-beat bass grooves. Who can refuse a superbly crafted cocktail of Neu! and Can, spiced up with some Ralf & Florian and flavours of the best that current mind boggling music has to offer? Transport was featured in The Avant-Guardian nr. 9.1; for this edition we asked them to shed some light on their inspirations, and to send us a nice list of their favourite records.
by Transport

Miles Davis — On The Corner
I want a lot of what he had during that electric and brutal phase... Very often I feel exactly the same as this record feels to me. Restless and fucking stressed, but somehow chilled and clear-headed at the same time.

Les Rallizes Denudes — Heavier Than A Death
In The Family I remember the first time, when I discovered them, knowing that noise was not a thing back then and that their bass player was a Japanese Red Army Faction member, who hijacked a plane to North Korea. My first time of love at first sight!

Catherine Ribeiro + Alpes — Paix
A wonderful record, that I will listen to forever.. And the best thing is, some instruments on this record are self-built (i.e. the thing sounding like a guitar and the drum machine).

Pat Metheny — American Garage
Swooping planes, chromium/white leather furniture, male bulges in tight blue jeans, drives in the great outdoors (who worries about the price of gas), stock footage of geese in flight or of swans bursting out of the water — this album really triggers my imagination every time. Obviously the reference points are superficial and cheesy — Midwest Americana galore… But man, its blend of jazz, rock, country and folk is so nicely crafted and executed. When I first got this for Christmas in the early 2000s my teenage aversion against undisguised cheese held me back from fully enjoying.  As time went by I shed that completely and ended up loving this album unconditionally.

Bobby Hutcherson — Happenings
From his vintage Blue Note period, this intimate quartet outing is probably the one that mostly rings home to me. It has superb interplay between Hutcherson and Herbie Hancock, a breathtaking rendition of Hancock’s  then freshly released Maiden Voyage and also ventures into more avant-garde territory in the typically mid-sixties Blue Note way: sinister and out-there but swinging. Drummer Joe Chambers’ The Omen is the big one here.

Tsvia Abarbanel — Wings of Love
This wonderful single was rediscovered and rereleased by the Israeli friends of Fortuna Records. Yemenite Israeli singer Abarbanel joins a little band for two mesmerizing cuts with a unique mix of Yemenite folklore and spritual jazz. Her vocals are haunting and the two pieces, both just under three minutes, are thoroughly surprising. Music that goes straight to my heart.

Scritti Politti — Provision
This wonderful album has a link to the first three favourite records that is purely coincidental (sort of became the hallmark of my aesthetics): my Chilean-raised girlfriend pointed out to me that both the opener of the Metheny album and this one (in an edited version) were used on private Chilean TV station TVN as jingles, one for news and one for the weather forecast. Postmodern, fully digital blue eyed soul, infused with sly poststructuralist lyrics and rich harmony with unexpected turns. The music is carefully constructed, has a perfectly shiny surface and subtly mocks itself and the structure it entails.

Editorial issue n° 11
Dear reader, Recently I stumbled upon an interesting article, published in the mid-60s. Reading old essays about art is something of a habit of mine. It helps filtering out the noise that is inherent…
by Niels Latomme
Transport
TRANSPORT is a trio made out of notorious names like Vomit Heat, Teks and Nicolas Wandt. You can call it Kraut rock in its most transcendental form, referring to Amon Düül, Ash Ra Temple, injected wit…
by Niels Latomme