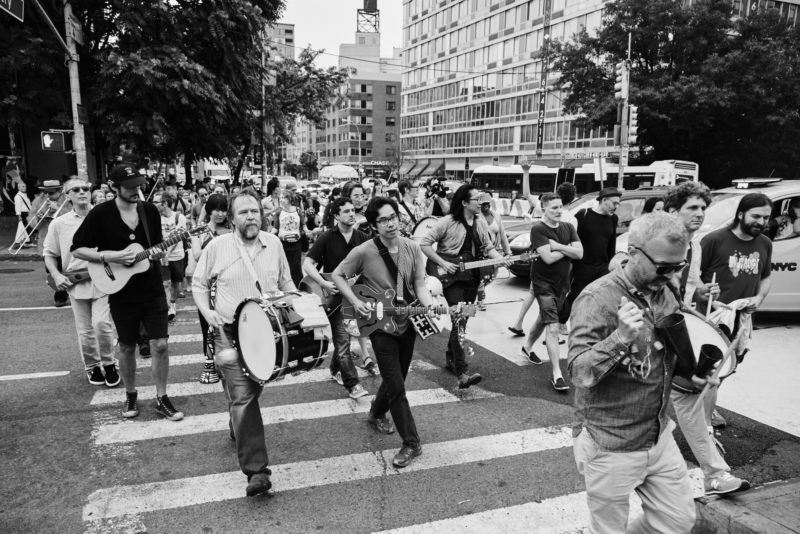 “Tent music for tent People”, it must be the best description a band ever has written. 75 Dollar Bill wrote it on of their tapes. They are still the duo of Che Chen and Rick Brown, playing out there rhythm and blues, taking this dusted genre back to the streets, to tents, to your wedding party, to places where you can dance to it. Injecting Sun City Girls-like jams or West African based psych from the 70s, they creating an ultimate form of true American music, music in which traditions blend together in a new form of music.
by Che Chen

We asked Che Chen to think about the idea of absence in music, and how form and content is interrelated. I presented the guitar player the questions put forward in this issue’s edito. Intriguing questions that accidentally seems to be questions Che is asking himself about his music. What happens if you cut off someone’s hands? Does his identity and being collapse by missing just a part of his body? Is a musician still a musician if he cannot hold and play his instrument? And also, has someone a core that defines his identity? In a lot of music the absence is very important. In free music, for instance, the absence of structure. In minimalist music, the absence of melody.  Or in your music, it sounds as a new form of American music, but by injected Asian traditions? The American identity seems to be defined by the absence of 1 tradition as it made out of a blend of European, Russian, Italian, African cultures, all newcomers in country without roots. Can a collective identity exist without roots?

It became an inwards oriented conversation. A lengthy interview with 75 dollar Bill was published in issue n° 7, on the occasion for the KRAAK festival 2016.

Niels, it’s a heavy line of questioning but I’ll try to answer. I tend to think of 75 Dollar Bill’s music as a kind of folk music or social music, rather than as rock or even experimental music. I use the term social music in the sense that Harry Smith used it when he compiled his Anthology of American Folk music, the second volume of which collected music that would have been played at social gatherings and dances or in religious settings. In short it was party music and church music, music for dancing, praying, or getting drunk to.

A couple of years ago, working on one of our self-released cassettes, I printed up a batch of calling cards that read: “Please Consider... 75 Dollar Bill for your: WEDDINGS - DANCES - PROCESSIONS - FUNERALS - PROTESTS - PLEASUREMENTS. Tent Music for Tent People”. We’d played at one wedding before then, in which we’d provided music before the bride and groom exchanged vows, and then led the wedding party on a walk through a forest and down into a valley clearing where the celebration was set to take place. But the cards were mostly wishful thinking at the time, talismanic objects that I hoped would manifest some of these situations into being. The phrase “Tent Music for Tent People” was another bit of magickal thinking, the naming of a community that did not exist yet, and a nod to Sun Ra’s own calling cards which read: “Beta music for Beta People”. We’ve since done another wedding (where we led a slightly more chaotic walk around a pond) as well as a parade in honor of the closing of New York record store, Other Music. It was a kind of jazz funeral, where we led a 25 person marching band down Bowery, second liners in tow.

I was born in the US, to Taiwanese immigrant parents, but my family wasn’t very musical. The one exception was my grandmother. She used to sing old folk songs occasionally, but she accompanied herself on a pump organ, an instrument from Europe (Taiwan was occupied by the Spanish, Dutch and Japanese at various points in history). So Chinese music wasn’t something that I grew up with. In fact, on a trip to mainland China as an adolescent, I found the Beijing Opera just as alien as I would later find Puccini. Neither one had been a meaningful part of my experience. So if I were to learn the traditional music of my ancestors now, I’d be hard pressed to make any claims of authenticity. As Henry Flynt wrote, “I had to learn the music of my native region of the U.S. as an assumed identity” [italics mine].

I got into music the way most American kids did in the 80s, through the radio, listening to rock and pop music. I often loved the energy of it, but there was never anyone that looked remotely like me making that kind of music — or punk music for that matter — so it was hard for me to identify with it past a certain point. I lived in one world at home and another one when I left the house and there was no one who spoke to, or more importantly, embodied this experience musically. This pushed my listening habits outside the mainstream pretty early on and I started to make a series of important discoveries: avant-garde jazz, Indian music, minimalism, etc. I didn’t feel like any of these musics belonged to me either, but it started to form a more complete picture of the musical universe for me. It’s a picture that’s still forming, always changing.

I went to Mauritania briefly in 2013 to study guitar and to hear that music where it has developed in it’s own highly specific (and hybridized) way. It’s the part of my musical history that I get asked about the most in relation to 75 Dollar Bill’s music, for obvious reasons, but I’ve also taken lessons from Iranian Musicians and Haitian drummers in New York, and count playing in groups led by Tony Conrad and Japanese bands like Maher Shalal Hash Baz and Che-Shizu as hugely influential parts of my musical education too. I tend to approach all these musics as an outsider to varying degrees, coming at them with a punk sensibility, rather than a musicological one. A respectful distance on the one hand but also a practical willingness to cannibalize on the other. If there’s anything I identify with it’s probably this sense of outsideness, a condition defined by its instability. This is just one kind of American-ness.

De Neus Van God
This edition highlights the 7th edition of KRAAK's Braublff (Materie und Laut) series and the 5th edition of Eastern Daze festival.
by De Neus van God
75 DOLLAR BILL
The instrumental duo of Che Chen and Rick Brown is one of the most exciting bands to come from New York in the last few years. Since its formation in 2012, the guitar & wooden box combo has released a…
by Justin Faase
75 Dollar Bill
Rick Brown and Che Chen form one of the most bizarre r'n'b duo's of the Western world. With complex guitar riffs and street musician-style percussion the inject the dead genre with Sun City Girls-like…
by Marijke Loozen
De Neus van God
A KRAAK festival 2016 special.
by De Neus van God