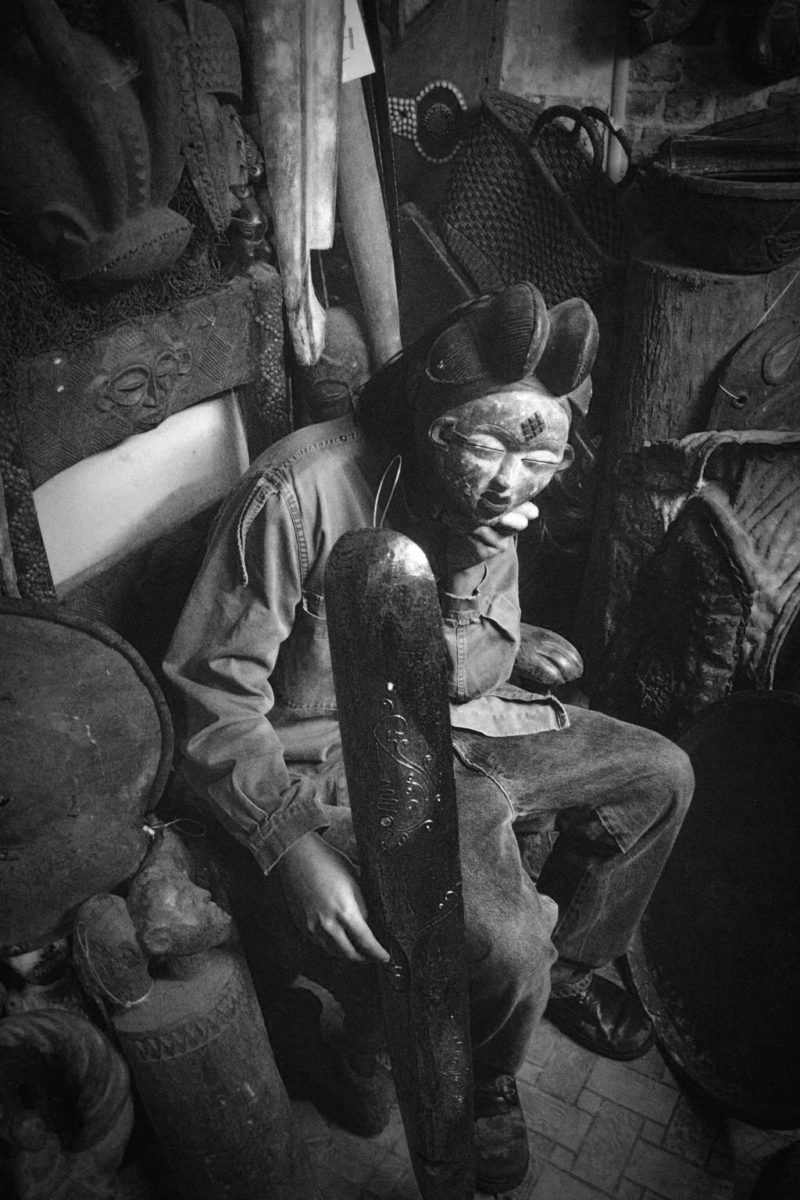 Sure, Waterloo has seen some major historic figures pass through it, but when all is said and done the most important one for us is easily Ernesto Gonzales. Nearly 10 years ago this Venezuelan wünderkid showed up in Belgium and started bombarding the local underground scene with music that was drenched in mescaline and attitude. His projects involve a membership in satanic krautrock ensemble Silvester Anfang and deep listening drone duo Steenkiste / Gonzales. He also produces the dirtiest kind of underground techno in Tav Exotic and turns country clubs into moshpits with his mighty crust punk band Viper Pit. But it all started from a solo endeavor which is still firing on all cylinders; Bear Bones Lay Low. Under that moniker Gonzales mixes drunken and dubby exotica tunes with tropical psychedelia into unforgettable mindbenders. We’ll be seeing all of you on the dancefloor.
by Lizzy Vandierendonck

The friendly Ernesto is born a collector. In his house, that is currently situated in a typical Brussels suburbia neighbourhood, are artworks on every wall, a well organised record collection and videocassette-filled shelves. There is coffee for the guests and sweet pretzels on the table, Ernesto prefers ginger tea.

In 2003 he arrived in our humble Belgium, all the way from Venezuela. And even though he always played music, his experimental chapter started on Belgian territory. His first band was at the age of twelve with his sister (who is also part of The Avant-Gardian’s editorial team) and best friend. Trying to make the same kind of music as Tool, they didn’t like their sound that was similar. Gonzalez says he always felt more attracted to the more fucked up side of popular music. Giving an example of Nirvana’s ‘Radio Friendly Unit Shifter’and peeping guitars.

At the age of 17 he made a couple of CDR’s he put out through his own record label, Eat The Sun, and a tape on the Canadian Knife In The Toaster. Since then his discography expanded to more than 20 releases. His latest album, Hacia La Luz, is out since august through No ‘Label’ (Rush Hour). He created it in the home of many underground affiniodos, Les Ateliers Claus, between the 13th and 26th of april 2015.

Composed out of repititive forms and layers and layers of ancestral synth, hand drums and shakers, Gonzales created a mind expanding soundscape that lifts us off into a cosmic space and spins us in a Tangerine dream. He says he always liked making trippy music, sometimes it can be poppier (the 2012 album El Telonero), other times abstract, like Hacia La Luz. His music is mostly a mixture of styles, something I see back in his home decoration.Improvising is Gonzalez first attempt to make a Bear Bones track. You can compare it as making a collage, but with layers of sound. Sometimes it starts with a melody in his head whereafter he makes the rest of the song up. He records a synth or a bass so he can come back to it later. The result is that most of the time his albums are an mix of old and new songs. And this probably explains him having the habit of doing different things at the same time. But with Hacia La Luz his work progress was a bit different. He created it at his recidency in Les Ateliers Claus in two weeks time. Mostly all the sounds he produces go first through an amp, then through a mic and then onto tape. Which is a slower process than recording on the computer. But the result is far more authentic that gives his sound a warm layer.

His aim is to make underground music for his people, with no intention to make hits. Playing with a bunch of effects, guitar fuzz and vocals, his music evolved from bedroom dronemusic to colourful sounds. You can find him on stage sitting behind his synth filled desk that is elegantly draped with blankets.

Editorial issue n° 8.1 — Eastern Daze III
We proudly present you the third edition of the Eastern Daze festival, a co-joined effort between Sound in Motion, Vooruit, and ourselves. This edition is again loosely inspired by the common and para…
by Niels Latomme
Viper Pit
Viper pit is a band of three venomous young men. They released their debut single on Acid Mind Records, and this label's head honcho raves about their work in a stand-out article.
by Hendrik Dacquin
Van Snorhout tot Synthesizer
Over ‘exotica en exotisme in hedendaagse muziek’.
by Niels Latomme