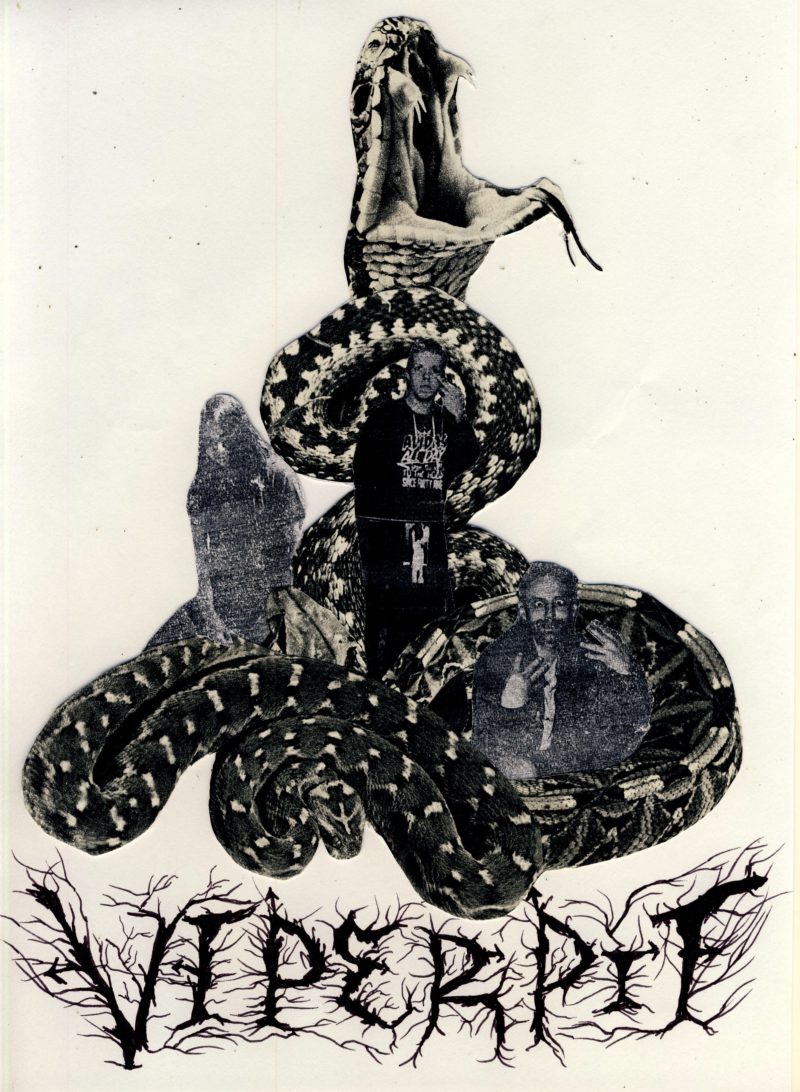 Viper pit is a band of three venomous young men. They released their debut single on Acid Mind Records, and this label's head honcho raves about their work in a stand-out article.
by Hendrik Dacquin

Ernesto – Ernie – Gonzalez (guitar, screams, bear boned) is twenty-seven and never walks into the cold night without his Stock Americain military jacket. He is a smart kid who bases the value of jackets upon their amount of pockets to hide cheap weed and postcards of San Antonio whose mountains and tropical weather make its people quite special, joyful and humble. People like drummer Mitchel, fan of the Suicide Girls website and born on April 17th, 1990. Two entwined serpents, Ernesto and Mitchel grew up together and started their first band in 2001: instrumental versions of Nirvana and At The Drive In. No bandcamp URL. Yet. The legacy of ‘Tim?’ — the band —  is one original masterpiece: according to Ernesto it was called ‘When the storm hits the glass surface’ whilst Mitchel titled it ‘la nuestra’. Looking for other perspectives is what brought both of them to Europe. Building a bumpy new life in rainy flatlands, they met Mike. 'Mikey' (bass, sunglasses, 5th of March 1984) has a weird thirst for parties and rolls copious joints on command. It's hard not feel at home when Mikey is around. Friends call him Jesus - because he emits light, some say, because he is bald, some other opinionated assholes suggest. In his crib Tienen, people know Mike by the name of ‘double MC’, as his initials are ‘M.C.’ and he rapped about how hard it was growing up. He was fifteen when he passed the Mike in ‘Area 51’.

Ernesto met Mike at a noise show in Tienen (Hail to Oli!) in 2013 and shortly after started jamming together as Tav Exotic. Mike and Mitchel, who don't speak the same language but are bonded by tattoos, skateboarding and intoxication, met in 2014. Viper Pit was born October of that same year, it started as a socially acceptable way to hangout in the afternoon but soon, Ernesto, Mitchel and Mike became good friends. These preachers of noise have blown crowds away at some of the sweatiest places in the underground. Viper Pit has heat sensors that detect and target warm-blooded drunken crusts and other middle-aged men. The primal screams of Viper Pit are packaged in short shots of anger with echoes of melodic pop sensibility; in order to hear them, you need to be pretty baked or just have good ears.

But why is Viper Pit so angry? Didn't we exchange teenage angst for hedonism, Hüsker Dü for Fleetwood Mac and sarcasm for irony? Men who lose their hair are expected to adopt a laissez-faire attitude and take insults with good humor. The pressure this causes can have a huge effect on men’s self-confidence, which has knock-on effects on their physical and mental well-being. There is simply no other way to explain why Mike, this grumpy master of baldness, makes such angry music.

But what about the other band members? What makes them so angry? Is it Bart de Wever, Donald Trump, the vinyl revolution?

It’s not because I started losing my hair I can't head bang anymore!

We shouldn't let go of feelings of anger and rage, this world is still going downhill: I don't think human nature can be exempted from feelings of anger, frustration and even destruction. I don't wish to be overpowered by them, but I don't want to ignore them. It's how the Universe works, creation vs. destruction, anger vs. joy; don't want to sound too Krishna-Core, but it's all one and we can't expect to reach one with acknowledging the existence of the other.

Anger and hate to understand and embrace joy and love? Being receptive to our own inner-cunt brings us closer to formlessness and rebirth?

I think in Viper Pit we share the same mentality: this world has gone to shit, making songs about 'rising up' or 'fighting the man' ain't gonna change a damn thing. We just want to be in touch with the wilder, aggressive and destructive part of our human nature. We just want to play rock 'n roll our way, fucking fast and fucking loud.

Viper Pit is not to be missed at this festival. PREACH NOISE!

Editorial issue n° 8.1 — Eastern Daze III
We proudly present you the third edition of the Eastern Daze festival, a co-joined effort between Sound in Motion, Vooruit, and ourselves. This edition is again loosely inspired by the common and para…
by Niels Latomme
Bear Bones, Lay Low
Sure, Waterloo has seen some major historic figures pass through it, but when all is said and done the most important one for us is easily Ernesto Gonzales. Nearly 10 years ago this Venezuelan wünderk…
by Lizzy Vandierendonck
Editorial issue N° 7 — KRAAK festival 2016
LADIES AND GENTLEMEN, You are holding the 7th edition of the irregularly published magazine wisely dubbed The Avant-Guardian. It's the third edition published on the occasion of the yearly KRAAK festi…
by Niels Latomme
De Neus van God
A KRAAK festival 2016 special.
by De Neus van God
Van Snorhout tot Synthesizer
Over ‘exotica en exotisme in hedendaagse muziek’.
by Niels Latomme