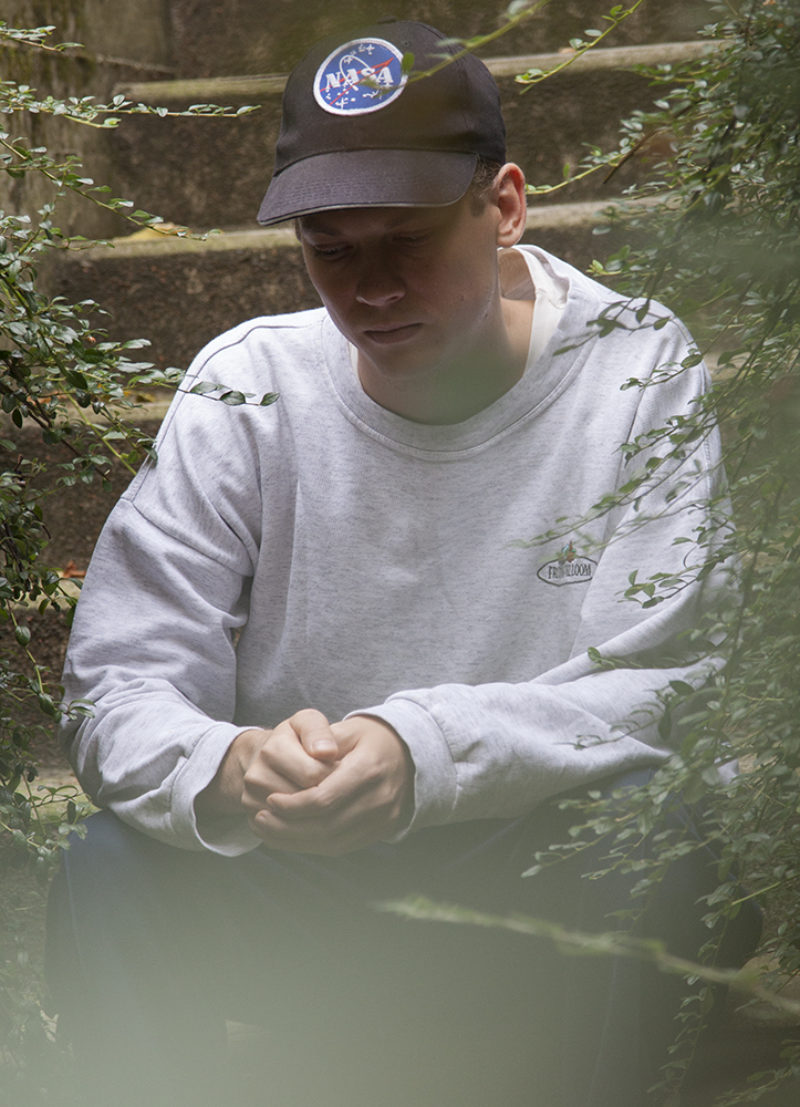 Jung an Tagen is one of the monikers of Stefan Juster. He is a Vienna-based post-millennial, hardcore arpeggiator and loose avant-gardist of all things new techno. With his latest record Das Fest der Reichen (edition Mego, 2016), the man proved that there is a direct link between hardcore gabba music and the sound experiments of the Darmstadt studios. In his universe, abstract electronic music is something you can absolutely dance to, and techno can be a banger in terms of hermetic experiment. Jürgen De Blonde, proto-millenial and endearing, Ghent-based electronic musician asked his fellow vanguard a few questions.
by Jürgen De Blonde

Your music clearly has roots in techno, but just as well in electroacoustic abstractionism. You don't shy away from melody, harmony or rhythm yet you maintain a compositional skill and sound design that transcends all that pretty effortlessly. I would like to delve deeper into your creative process by means of this interview.

So here's a first question: what tools do you use to create your music?

Growing up in post-techno Europe in the late 90s, early 2000s computers already took over. Soon, I got very interested in noise music and the involvement of the body and found that laptops are not a very suitable tool for making music. From that moment on I mainly used pedals, voice and hardware synths.

After doing that for a while I realised that A) I was constantly broke from buying gear, B) because the stuff piled up I could not transport it to my gigs any longer and C) I felt more and more that I was more interested in composing for performative gestures that deal with space and time, than actually playing certain movements. Since then I work with a laptop and I never looked back.

I still think that for a live performance it's a bit idiotic to look at a screen, so I set up a couple of very basic controllers and changed certain parameters that I think are important to be in control of, and let the laptop disappear.

To differentiate between what I do on record and what I do live, is what I work on the hardest maybe.

Making sound performances comes very naturally, I know instinctively what I want and I can usually make it work. It’s the fact that we all share one timeline and one space in which I can build a narrative. Also that I can be in control of the actual physical impact.

A record can be played on headphones, in a club, very soft or even on a phone. Ideally it needs a poetic angle to work in more than just one situation. And when the music has a very physical dimension you have to compensate that with something.

I really like the idea that a record can creep up in different moments of life, not just one.

The focus of your live shows clearly lies in being a powerful sonic experience, making brain and body move. Is that why you don’t use visuals?

Again, coming from post-techno times, visuals where a big thing. When I was 16 or so, I even did visuals on drum and bass parties. But very soon it became evident that this was just plainly idiotic. But because of things like Liquid Television on MTV and later my discovery of experimental cinema I always kept on working on music in combination with video in one way or the other.

Experimental cinema and experimental music are both insanely powerful art forms and it’s incredible if both work together. But if one is stronger, the other one disappears.

Live, most of the time I work with pitch black darkness and because my music is somewhat graphical, people show up later and report what they have seen in their heads. That’s quite amazing. But lately I increasingly started working on animated visual motives again and combining them with sound. I am working on the first Jung An Tagen A/V performance for the HYPERREALITY festival in vienna as we speak. I am super excited to venture into that after such a long time.

What is your attitude towards being visible as an artist during the performance? (As in, being on stage or being visible for spectators).

I experimented a lot with different strategies. I wanted to disappear completely, not face the audience, be very present or try not to care. The more specific my music became, the more the ritual grew with it. For the moment I have a very clear setup: I play in front of the speakers, because I need to hear exactly what the audience hears. Working with monitors is nonsense. This way I usually form a triangle with the speakers and by this gesture I introduce them as my instrument, at least this is how I see it. With the audience facing me we form a closed gestalt of some kind. When it’s very dark and we are all connected by the same frequencies I can achieve the best results.

Your music is psychedelic and allows for transformative experiences. Is that something you take into account when creating? Or is it just the nature of the beast?

Absolutely, that is my main intent. Transformation.

How important is technology for you?

Very. Technology in combination with technique. I found out very soon that I get bored by my own intentions very easily. So I started to work with techniques like cut-up. When you have a new machine or a new piece of software in front of you, things will come up that you would never have created if you knew its workings inside out. I would love to have the possibility to work with machine-learning right now.

Can you imagine yourself making music in a different era, in the past, with a different technology?

Not really. I've never even particularly liked the aesthetics of the past. I love to fool around on a piano if I see one, just because it sounds so great.

But like I said I am not really a musician in the classical sense, nor do I want to become one. Ultimately the music that I liked to make started with automation and recording. Hands off. Because I've always liked sci-fi I got caught up in what they later called hypnagogic. I thought it was fun to think of the future of the past. Nowadays I think nostalgia is reactionary per se.

SPRING BRAKERS 3: Jung An Tagen & Eric Frye
Continuing our Spring Brakers series is our first double bill! Austrian computerist and blacklight wizard Stefan Juster aka Jung An Tagen brings us an electrifyingly moody set as he comes down from th…
by Covid Sludge Contingent
Editorial issue n° 11
Dear reader, Recently I stumbled upon an interesting article, published in the mid-60s. Reading old essays about art is something of a habit of mine. It helps filtering out the noise that is inherent…
by Niels Latomme
JUNG AN TAGEN
After two hermetic tapes, Jung An Tagen breaks out with Das Fest Der Reichen, his vinyl debut on Editions Mego, which makes him continue a long tradition of experimental electronic music coming from V…
by Joeri Bruyninckx