Yürgen Karle Trio: The World In A Schachtel 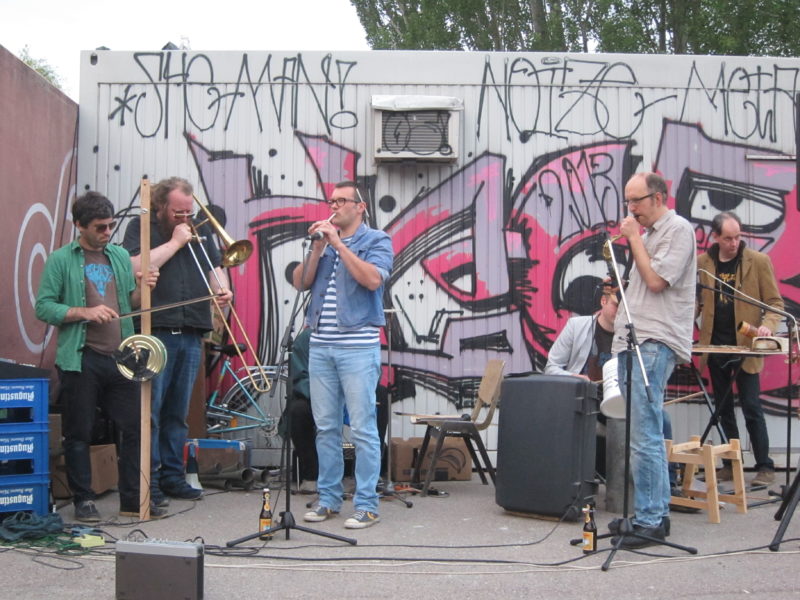 What is the Yürgen Karle Trio? Well, it’s not a trio (anymore) and it’s far more than a band, too. The various musicians performing (not only) under this moniker are long-time Stuttgart scenesters and, therefore, I have to go back in time and widen the context a little.
by Holger Adam

To begin with, I first read about a band called Rocket Freudental at the end of the 1990s when they were mentioned in the German music magazine SPEX for sounding similar to the legendary American garage blues punk duo Doo Rag. Back then I was knee-deep into all that trash-punky stuff released by labels like Crypt, Goner or In The Red Records and was surprised to find out about a German band being rated as good as the insane duo from Tucson, Arizona. But, since it was the pre-internet days I didn’t manage to get a copy of whatever record it was that Rocket Freudental had released back then.

I forgot about it until nearly a decade later, when I first got to know about a vibrant scene of musicians at the Nordbahnhof in Stuttgart that was back then centered around a concert venue called Wagon. The Wagon is gone now, a container-venue called Alte Schachtel replaced it and expanded into a larger container-version fittingly dubbed Neue Schachtel, which since a few years now operates as a cultural hub for an international underground scene that is traveling through and playing shows while on tour. Similar to Brussels’ Les Atelier Claus, Amsterdam’s OCCII, Antwerp’s Het Bos or London’s Café Oto, the Neue Schachtel is a hot spot for a music scene that leaves behind limits of genre or any other dull attempt of categorization to make exciting things like the bi-annual Troglobatem Festival happen. Another band closely associated with the venue and its surrounding scene is the long-running musical collective Metabolismus, a more or less well-known bunch of freaks that re-organize their idea of what’s (not) music since the mid-1980’s. Their musical palette ranges from folky weirdo-pop to hilarious electronic free improvisations on self-built synthesizers and other more or less commonly known instruments. And another – more recent project from that creative nucleus is Mosquito Ego, a free-ranging psychedelic punk outfit.

But what the heck does my name-dropping ‘n myth-making ramblings have to do with Yürgen Karle Trio? Well, Yürgen Karle consists of members from Rocket Freudental, Metabolismus and Mosquito Ego, but – apart from not being a trio anyway – the Yürgen Karle Trio is far more than the sum of its parts. To get a vague idea across of what kind of band you are about to witness at this year’s edition of the Kraak Festival, I’m trying to express here how entertaining and instructive it is to enter this special circle of local heads and single-minded talented weirdos. Their knowledge of music and other cultural phenomena seems boundless, their humor is invigorating, the all-around atmosphere is relaxed and interpersonal encounters are friendly. Of course, that may be the same with every avid underground scene from Antwerp to Portland or whatever hip city you may think of, but – first off – is it? And, secondly: this is Stuttgart, home of the Käsespätzle (routinely served at the Neue Schachtel to – non-vegan – touring artists) and the Second Hand Records shop  (another fixed-star and an important source of knowledge – i.e. obscure records – in this micro-universe). I have no idea what constellation the stars were in when all these crazy cats slipped out of their mother’s wombs, but altogether they’re a local treasure and of importance to many beyond the city’s limits.

I say it again: Day in, day out, international artists well-known not only to the KRAAK universe play the Neue Schachtel, countless local acts cut their teeth on its stage or return for annual events (like crust punk stalwarts Cluster Bomb Unit, for example), and, in general, the place serves as a haven for anyone thirsty for unique and adventurous musical experiences. Meanwhile, a few kilometers out of town, in a small village called Degenfeld, some of the guys are running Sumsilobatem Studio. You wouldn’t expect the likes of Eugene Chadbourne or Samara Lubelski to be regulars in a sleepy Swabian village, but not only do they record there, they also stay to enjoy the beautiful rural environment and the exquisite in-house record collection. Believe me, I’ve been there, the place is insane!

So, what I am repeatedly trying to point out since you, dear reader, had the nerve to start reading my meandering words is that an encounter with the infamous Yürgen Karle Trio means more than meets the eye: it will be a multi-dimensional, mind-boggling, synesthetic experience of not just music but a way of life! Of course, Yürgen’s free-form improvisations on mostly self-built instruments are reminiscent of household names like The Nihilist Spasm Band, Caroliner Rainbow, Anima Sound or the Sun Ra Arkestra at its most deranged, but dropping names doesn’t come close to what is really happening when bands like Yürgen Karle Trio (or one of the beforehand mentioned big shots) enter the stage. The music’s just one part of a much wider picture and the musicians, the human beings themselves are the living – and stubborn – proof to a life (at least more than part-time) and its possibilities beyond society’s domestic expectations and aside from the dull cultural norms blindfolding our sight whenever we’re switching on the tube or tune into the endless distractions the internet keeps in store. So, I highly recommend not to just gather in front of the stage when André Möhl, Robert Steng, Moritz Finkbeiner, Thilo Kuhn, Werner Nötzel, Björn Luchterhand and Dietmar Köhle perform on tin cans, buckets or beaten-up suitcases and self-built instruments with strange names like the Saxosause or the Müllulele (a waste-bin ukulele), I hereby encourage each and every one to approach the Yürgen Karle Trio off stage to share a beer or a spliff and get in touch about what’s up and what’s next – like we all do at KRAAK Festival. Share the communal experience of love for exceptional music and other not so common cultural goods.

Isolation Jams Pt. Germanalia!
Two gems were dropped in our mailboxes recently: a sick new track from the KRAAK Fest 2020 legendary Yürgen Karle Trio, and a swoon-worthy mix by 1/3 of YOR to elevate dreams of physicality into the s…
by Covid Sludge Contingent
KRAAK Festival 2020 Photo Report
Plastic utopias, visionary environments, with the sounds and people that make them come alive: Hans Van Der Linden ventured once more to document the spirit of KRAAK Festival, this time teamed up with…
by Hans van der Linden Daniela Leal